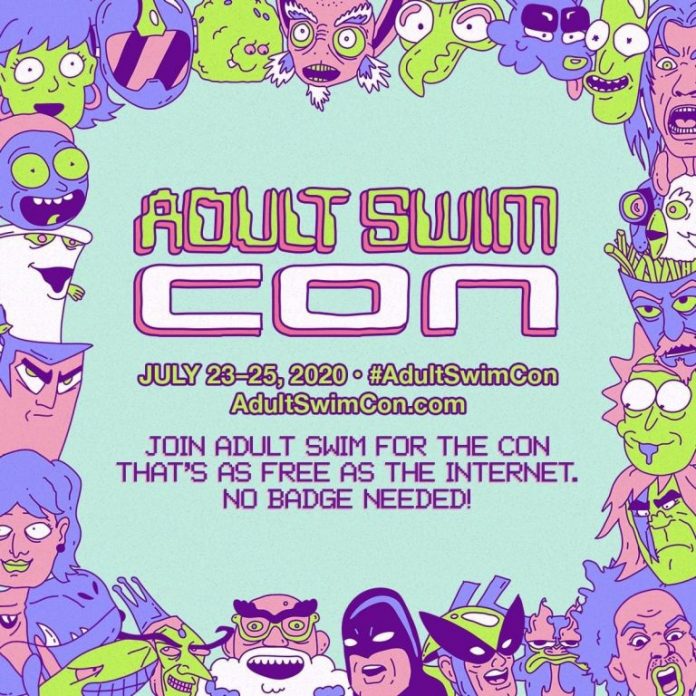 This year’s Adult Swim Con took place from July 23 to July 25, 2020, instead of having in-person events at San Diego Comic-Con, which took place during the same weekend. While not the first convention to operate entirely online this year, it is the first-ever convention hosted by Adult Swim, featuring interviews with creators, marathons of Adult Swim shows, a cosplay competition, a special edition of the Toonami broadcast, and more.

Samurai Jack creator Genndy Tartakovsky and head writer Derrick Bachman came together for a live panel on the Adult Swim Con Twitch channel on July 24 to discuss the upcoming video game Samurai Jack: Battle Through Time, as well as answering questions from viewers posted in the channel’s chatbox. Greg Baldwin, the voice behind Aku, joined via the channel chat and interacted with fans as the Shogun of Sorrow himself. The full Q&A is available on the Adult Swim YouTube channel:

The Toonami Edition of Adult Swim Con kicked off with an announcement for a new Toonami co-production with Production I.G. and Crunchyroll called Fena: Pirate Princess, which is due to premiere on the block in 2021. Fena follows the journey of the orphan Fena Houtman as she escapes a life of slavery in search of “Eden,” where she will find true freedom and discover the truth to her mysterious past. A short interview with Fena director Kazuto Nakazawa (B: The Beginning, Vassalord), which he animated himself, followed the trailer premiere.

There was also a Rick and Morty special titled “Ricky and Morty VS Genocider” premiered during Toonami last weekend. Morty goes to Tokyo to find Rick while also dodging other Mortys from alternate timelines who are trying to do away with Rick. The short features sharp animation, an interesting characterization of infamously cynical Rick, and subtle homages to famous animated works such as Akira. The project was directed by Takashi Sano (Tower of God) and animated by Telecom Animation Film, the same studio that has worked on key animation and in-between animation for titles such as Fullmetal Alchemist: Brotherhood, Attack On Titan, InuYasha, and many more.

An interview with Blade Runner: Black Lotus directors Kenji Kamiyama and Shinji Aramaki revealed the reason they decided to animate the show using 3DCG, the influence the original Blade Runner had on the anime industry, how the ongoing pandemic has effected production, which of them would be a Replicant, and more. Black Lotus takes place after the events of Shinichiro Watanabe’s Blade Runner Blackout 2022 short film, in which all of the world’s data goes missing. The show is currently scheduled to air on Toonami in 2021.

Hiroshi Nagahama, director of the anime adaption of Junji Ito’s Uzumaki, spoke about the challenges of adapting a horror story in animations, maintaining the integrity of Ito’s original work, and working on an anime amid the pandemic in his interview for Toonami. At the time of the interview, the audio for the first episode of Uzumaki is complete. The four-part animation series is scheduled to air on Toonami in 2021.

Without a physical convention to host musical guests this year, Toonami released a recording of the pillows’ live concert at San Diego Comic-Con in 2018 on the Adult Swim YouTube channel. The hour-long setlist included “Spiky Seeds” and “Star Overhead” from FLCL Progressive and Alternative, respectively. Clips featuring those songs aired during the Toonami broadcast.

At the end of the night, Toonami released two new episodes of Toonami Pre-Flight, featuring interviews with the voice actors of TOM and SARA, Steve Blum, and Dana Swanson. Blum and Swanson talked with Gill Austin and Jason DeMarco about how they got their start at Adult Swim, their acting careers, life during the pandemic, and more. Both episodes are available to watch on the Adult Swim YouTube channel.

Did you enjoy the Toonami edition of Adult Swim Con? Let us know by commenting below or directly on our social media. Be sure to follow us on @ToonamiNews on Twitter, and @ToonamiFaithful on Facebook and Instagram. You can listen to the Toonami Faithful podcast on Soundcloud, iTunes, or Spotify for interviews, discussions, and breaking news updates. This week, Sketch, Paul, Darrell, and CJ come together to discuss Food Wars and, of course, delicious food: