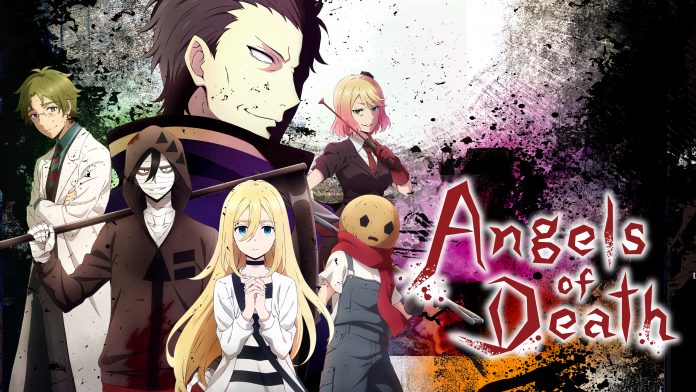 I couldn’t be more excited to review Angels of Death. I recall sticking with the series during its SimulDub run from FUNimation and I was surprised by how much I enjoyed it. Adapted from a horror adventure game (which is playable on Steam or Nintendo Switch), I wasn’t sure what to expect, considering the mixed results video game adaptations can yield. Despite this series being a horror one, I was surprised at how it didn’t give off much of a horror feel.  It had horror elements, but I did not get the sense of dread that the genre typically brings. Surprisingly, I had a lot more enjoyment because it gave off a more “cheesy” horror vibe. But does Angels of Death reach a milestone that other horror style anime have reached? Or does it falter due to its unique approach to the genre?

Angels of Death follows the story of Rachel Gardner. She was transported to a hospital for counseling after the death of her parents. However, she does not remember entering the building, nor why she was in it to start. She wanders the basement floor of the hospital and stumbles upon a new level, and a man with a scythe named Zack tries to kill her. Thankfully for Rachel, another man comes to her rescue, a doctor named Danny, and the two begin to talk about what Rachel remembers and how she ended up where she did. Unsure how to feel around Danny, Rachel continues to talk with him but soon finds out about Danny’s obsessions with eyes. He seems to be interested in Rachel’s and is ready to kill her for her “peepers.” It’s here where Zack appears and kills the doctor, saving Rachel. Prepared to kill her, Zack notices how emotionless Rachel is and doesn’t find enjoyment in murdering her. This moment is when Rachel begs to be killed, and the two form a promise. Zack will help Rachel leave the hospital, and once they do, Zack will kill her.

The two then travel through all the hospital floors, facing down other death games and adversaries who are the subsequent floor bosses in the building. Both Rachel and Zack use their wits and brawn to stop Eddie, Cathy, and Abraham Gray to reach the top floor of the hospital. Of course, it isn’t easy, and both are nearly killed by the other floor bosses. However, as the two continue their journey, Rachel begins to remember why she was in this hospital in the first place. She was the one who murdered her parents and started a disgusting habit of sewing her victims back together after she murdered them. Rachael later remembers how Dr. Danny treated her and would then mold her into a killing floor boss just like the other residents. He had an interest in her eyes and blank expression, making the case to turn her to an “angel” (as well as viewed as the final floor master). Despite all this information, Zack continues to help Rachel reach her goal so he can kill her (despite Rachel not being able to make Zack her God), and the two end up escaping the hospital. Sadly they are both separated (Rachel in another hospital and Zack in jail); the two were able to reunite so they could ultimately keep their promise.

I give Angels of Death a ton of credit for the overall story. This facility wasn’t what it looked like on the outside, and following the main character who has no recollection of how they ended up there is a classic trope in the genre of horror. But it was effective due to Rachel herself. She was a great character to lead the story where it went. Her blank and emotionless expressions helped create an aura of uneasiness, which is vital for a horror series. It kept the entire series together, contrasting the more “campy” moments involving other characters. Rachel’s calmness helped put the pieces together and created the wild environment that you’d expect from a horror series. She was invaluable to this story. Because of how she conducted herself in figuring out the floors, fighting other bosses, and handling Zack made Angels of Death more enjoyable than I expected.

Plus, learning more about Rachel as time went on continued to be the most enticing part of the entire series. It wasn’t just that she was a victim of Dr. Danny or any of the other angels. She was part of the crew and happened to lose her memory for whatever reason. Learning that she was just as creepy and murderous as her colleagues was one of the eeriest moments I can remember in anime. She kills victims and then sews them together. It would have been great to see the results of her work as an added shock factor or “jump scare” that horror stories always seem to have. But not being able to see still felt satisfying, due to the “not knowing” factor. Her story arc, learning about how she became who she was, was fantastic, and something I cannot recommend more.

And while learning more about Rachel and the facility she was trapped in was the biggest strength of the series, I enjoyed the entire cast of characters. The dynamic between Rachel and Zack was oddly comforting since both complemented each other nicely. Zack, being the brawn, would take on tasks that required strength, while Rachel laid the foundation with her intellect. Plus, the group continues to meet floor boss after floor boss, which kept me interested in who would show up next. Danny, Eddie, Cathy, and Abraham all brought a unique element to Angels of Death and will easily connect with people.

Sadly, not everything in Angels of Death was the most optimal. I generally enjoy world-building, but it took this series a bit longer than it should have. I found the beginning a little slower than I would have liked, which was due to the odd episode count this series has. Typically, a series has about 12 to 13 episodes for a season. However, Angels of Death gave us 16 for this release. I usually never complain about getting more episodes of a series I like, but I think the added three to four episodes created moments where Angels of Death had to fill time, which wasn’t necessary. After killing Cathy (who’s arc did feel a bit long), I felt that Rachel and Zack’s time on floor B2 (with Abraham) played out at a snail’s pace.

And because of that slow start, I worry if viewers will be able to stick with Angels of Death. The mystery of why Rachel is in the hospital in the first place can only hold viewers for so long. And this part of the plot wasn’t played up as much. So it isn’t until much later where fans start to realize that there is a lot more to Rachel than being a helpless victim. And because of how apparent things come together, I’m not sure how much the mystery will stick. There were some fun battles, such as with Rachel and Cathy and the climactic showdown involving Danny. But I think a crisper pace to Angels of Death would go a long way.

I also find Zack’s backstory unnecessary. We don’t need to feel pity for Zack about his upbringing, despite how horrible it was. No one should be surprised that many murderers had terrible childhoods and take out their frustrations by killing. You would have liked to see someone like Zack rise above what happened and make a decent name for himself instead of what he became. It created this conflicting feeling of empathy for a man who has murdered people for no better reason than because it was fun. And I think this series falls victim to that type of story-telling considering what we see with Rachel’s family. And while showing Rachel’s backstory was essential to reveal why she was in the hospital, Zack’s just felt shoehorned in this series. Again, I don’t think I need to feel empathy toward Zack, but Angels of Death did that.

As far as the English cast is concerned, Angels of Death brings one of the strongest FUNimation could dish out. Every primary and supportive character sounded flawless and enhanced the viewing. As Cathy, Jamie Marchi was a huge treat, and she perfectly fit the sadistic floor master. The design screamed her voice and was able to give a performance that was one of her best. I was also impressed with Meg McClain’s rendition as Rachel. She gave a fantastic soft-spoken performance that I imagine would be so tough to nail (although she did). I wish McClain would’ve been allowed to do more of a creepy young-girl voice once Rachel figured out who she was, to portray a more uneasy feeling. But I could see that would be uncharacteristic for the character if that route was taken. The best performance of this series, hands down, goes to Dallas Reid as Zack. His role was challenging, and his ability to yell in a sadistic, creepy, and angry voice (all at once at times) blew me away. Reid’s skill continues to improve with every new anime he’s in, and Angels of Death might be his best performance ever. Everything he provided in the voice for Zack was terrific, and I highly recommended English dub fans to check this out. And that’s just with the three performances I mentioned. This series continues to bring out some stars with Derick Snow, Brittany Karbowski, and R. Bruce Elliot rounding out the rest of the main cast creating an incredible dub that is top-tier.

As far as extras, FUNimation included four art cards in this release. Two of Zack and two of Rachel. And there was an episode commentary included, along with trailers and promos added. It seems this property has a decent following, or that the SimulDub was popular enough to warrant extras in the home media release (for which I cannot complain). But I’m curious if the previous material (the video game) played a part in why this series had a few extras.

I was very impressed with Angels of Death and felt it should find its way into your Halloween anime rotation every Oct. The story is fascinating, and the characters brought everything to life. While it didn’t have many horror aspects that I love (jump scares, physiological questioning, etc.), the uneasiness of whether Rachel and Zack would keep their promise did enough to keep me invested throughout the whole series. It starts slow, and the 16 episode count was weird, but I highly recommend people checking this series out. It was like a campy horror film, and I love those! After watching this anime, I’m more inclined to check out the game (which is on Steam or for Nintendo Switch) and think the creators should be pleased with how their game was adapted to an anime.

Pros: A fun and interesting story that kept me invested; loved all the different personalities of the floor bosses; gave an aura of uneasiness that a horror series needs; a tremendous English dub cast highlighted by Dallas Reid.

Cons: Slow at the start, but picks up later; the episode count at 16 allowed for more lulls in the series than needed.