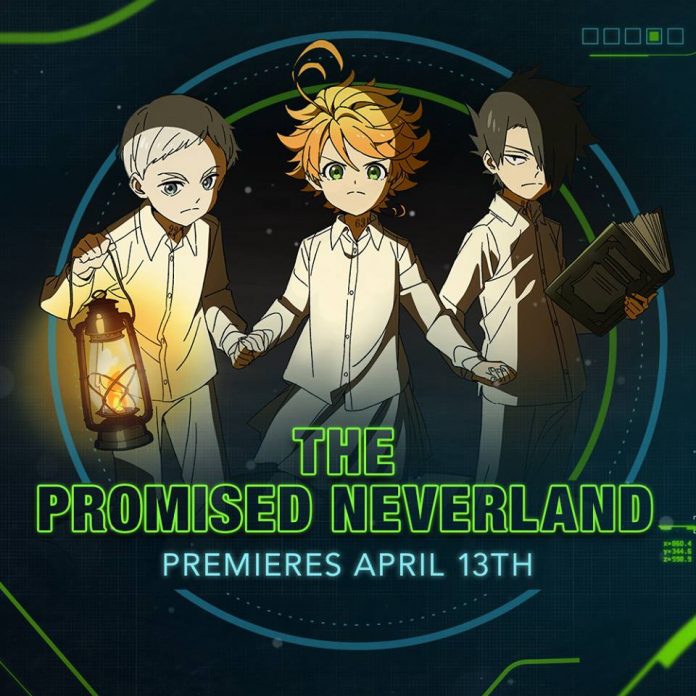 One of the biggest hits and talking points of the Winter 2019 anime season, Toonami has just announced that Emma and the orphans of Grace Field House will be joining the “Toonami House” as The Promised Neverland will be making its English Dub premiere on the better cartoon show beginning on April 13.

Based on the hit Shonen Jump manga series written by Kaiu Shirai and Illustrated by Posuka Demizu, which has over 128 chapters and 13 volumes and counting since it began publication in August 2016. The first season ran in Japan and on various streaming sites subbed from January 11 to March 28, 2019 and was a big hit among viewers. With its popularity and critical acclaim, it became a highly requested show for Toonami to eventually air.

Studio CloverWorks and Aniplex, who are producing the anime, have already greenlighted a second second, which will premiere sometime in 2020.

The story’s synopsis is as follows (via ANN):

Emma, Norman and Ray are the brightest kids at the Grace Field House orphanage. And under the care of the woman they refer to as “Mom,” all the kids have enjoyed a comfortable life. Good food, clean clothes and the perfect environment to learn. One day, though, Emma and Norman uncover the dark truth of the outside world they are forbidden from seeing.

The Promised Neverland will be the fifth overall Aniplex acquisition by Toonami since its revival and the second in 2 months after SAO returned from its 3 year hiatus. As the premiere episode won’t be ready for another two weeks, Toonami and Aniplex will showcase another doubleheader of Sword Art Online Alicization airing on April 7 from 12:30-1:30 am ET/PT. The Promised Neverland’s spot on the schedule is still to be determined, and Aniplex has still yet to reveal the show’s cast as of this writing.

What are your thoughts of The Promised Neverland joining Toonami? Let us know by commenting blow or directly on our social media.