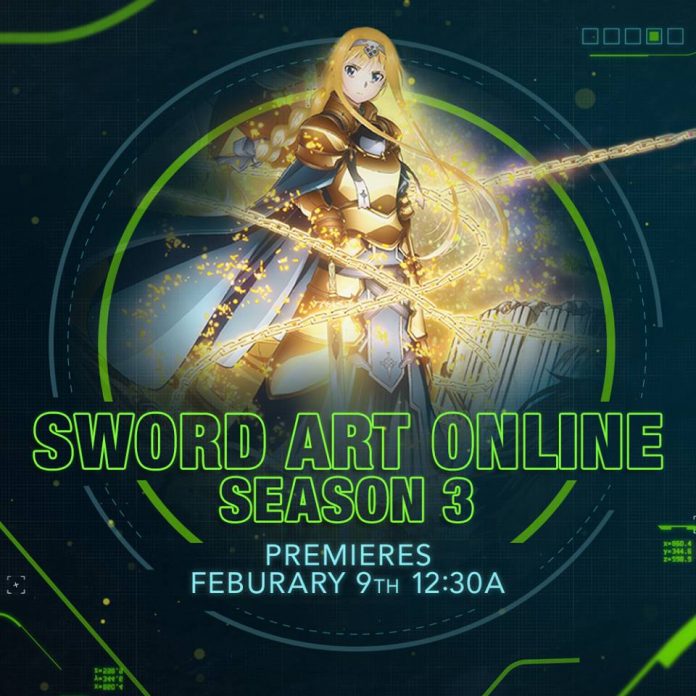 In a move that many fans anticipated since season 2’s end and a moment that perhaps comes at no surprise outside of those who wanted Netflix and Hulu to take the premiere rights away from Toonami, Toonami and Aniplex have announced that the highly successful Sword Art Online franchise will be making its return to the better cartoon show for its highly anticipated third season in Project Alicization.

System Call! Sword Art Online Alicization is coming to #Toonami on February 9th! Be sure to catch the one hour special episode starting at 12:30AM! pic.twitter.com/5dbvEixPkt

Season 3 will make its debut on February 9 at 12:30 am Eastern/Pacific, taking over Mob Psycho 100 on the schedule as the dub for season 2 of the latter (which is currently airing in Japan and simulcasting on Crunchyroll) is not ready for release as of now. As the first episode is an hour’s length, Megalo Box will have the night off to make way.

It has been over 5 years since Sword Art Online made its debut on the better cartoon show with season 1 airing from July 27, 2013 to February 15, 2014 and season 2 airing from March 28 to September 26, 2015. SAO will join Attack on Titan, JoJo’s Bizarre Adventure and Naruto as the only shows in the modern era to have at least 3 seasons/installments air on Toonami. This is also the first time since since 2015 that Aniplex will have a presence in the block after both SAO season 2 and Kill la Kill finished their runs.

During the show’s hiatus, the SAO franchise created a movie in Ordinal Scale (which takes place between Season 2 and Season 3) as well as a side story in Alternative Gun Gale Online. Toonami has announced no plans to air those installments as of now. Although the reason still is unknown, Jason DeMarco has denied that Alex von David’s theory of non-consequential gun violence played a role in Toonami passing on AGGO.

In anticipation for Sword Art Online’s return to Toonami, we covered the Project Alicization premiere in Hollywood back in October and got the opportunity to interview Bryce Papenbrook, the voice of Kirito. For those who would like to know what to expect going into this new season, we recommend checking out those articles if you haven’t done so already.

What are your thoughts on SAO’s return? Let us know by commenting blow or directly on our social media.