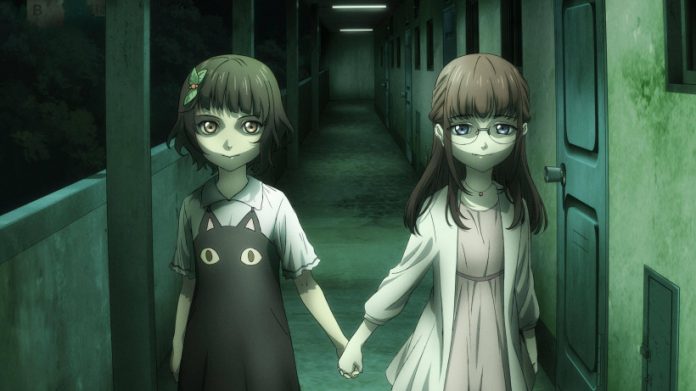 Housing Complex C has completely captivated me, especially after watching the second episode. I love how it has incorporated classic horror tropes and cliffhangers to frighten the viewer in such a way that it keeps you wanting more. Toonami viewers looking to see the series gain momentum will not be disappointed by the curiously titled episode two, “Mismatched Buttons.”

At the end of the previous episode, Kimi made a strange discovery in the apartment of Hideo and Momo. She finds it in disarray and encounters a human-shaped mass where Hideo would typically be, sitting in front of his computer. This mysterious substance turns out to be moss, and we learn Hideo and Momo have disappeared without a trace. It’s hard not to jump to the obvious implication here, but with Horror, you never know what might lurk in the shadows.

While the residents attempt to understand the strange occurrences in their housing complex, “Yoshkin” (Kentaro Yoshi), one of the older gentlemen, repeats a line from a poem:

“Sing your prayers to the heavens, until the kurakado is wrapped in verdant moss”

He wistfully muses how the phrase refers to being destined to reunite with one’s loved ones someday. It’s an allusion to something more ancient, which is explored in more depth throughout the episode.

There were hints in the first episode to the history and lore of Kurosaki, and I was especially pleased that this episode further delves into this. In a moment of whimsy, Kimi attempts to cheer up her friend Yuri by reciting a song, which turns out to be somewhat nonsensical, as Yuri rightfully points out. However, Taka recognizes the deeper meaning behind the song, much like Yoshkin’s poem, which alludes to the ancient culture of the Kurakado. He draws a connection to a nearby temple, explaining that “kado” means “gate” in this particular context, which might refer to the Torii gate, which leads up the mountain to the temple. There is a lot of nuance in the Japanese language here; unfortunately, I’m not an expert in Japanese or Kanji. But, the translations make a valiant effort to break it down for the English-speaking audience.

This disposition on the local mythology really hooked me, and I’m eager to see how it’s incorporated into subsequent episodes, as it’s obviously an essential part of the story. There is historical precedence for using folklore in horror. Many classic folk stories were used as a way to scare children into good behavior, and by incorporating traditions and history into storytelling, these elements can be shared with a wider audience. In the case of Housing Complex C, the use of in-story mythology elevates the story by providing more context and reasoning for the events as they unfold.

Another intriguing aspect was how the Japanese residents’ xenophobia is approached, specifically the old lady Wada’s aversion to her “foreigner” neighbors. It’s nicely balanced by Taka’s wise words about how rumors can be harmful and fuel further misunderstandings, creating a counter for the audience to understand the Kurosaki residents better. Taka uses the analogy of mismatched buttons, like how a person accidentally buttons a shirt out of alignment to better illustrate his point more clearly. It’s an elegant way to describe how a mistake can lead to unintentional additional mistakes, and it ties in nicely to the episode title, as well as the attitude the residents have toward the “foreigners.” I also can’t help but revisit the opening sequence from the first episode, where Khan calls out Kimi’s name and chases the girls into the underground storage. It’s clear during these two episodes that Khan is trying to protect Kimi, which makes me wonder if not all is as it seems during those harrowing opening moments.

Housing Complex C makes liberal use of “jumpscare,” an abrupt method of scene transition that effectively unsettles the viewer, with one moment being a scene of placid dialogue followed by something disturbing. The way the screen pans to specific moments and detailed close-ups of a face or object is particularly eerie, not to mention the continued instances of unexplained occurrences plaguing the housing complex. This suspense-building technique has roots in classic horror, such as the landmark 1949 film Cat People, and is used in popular titles such as Friday the 13th. The overall effect is very creepy.

And while I can appreciate some not being huge fans of a slow burn series (especially with the length of Housing Complex C), I like the mix of slow and fast pacing during this episode. Given that it’s a four-episode series, it’s crucial to make full use of the short time it has. The changing daily calendar between scenes not only enhances the sinister atmosphere but also is an efficient way to demonstrate the passage of time as events at Housing Complex C are unfolding to give this series a more complete feeling.

The episode ends like the previous one, at a disturbing cliffhanger, and this one is certain to elicit a strong reaction from the viewer. I, for one, am completely hooked by this story, and looking forward to what will happen next!

Housing Complex C premiers on Toonami at Midnight each Saturday throughout October.

Happy Kuro Kitty is a writer for Toonamifaithful.com. Feel free to follow Kuro on Twitter @HappyKuroKitty, or hear Kuro on the latest episode of the Toonami Faithful Podcast, where the crew discusses the first episode of Housing Complex C.