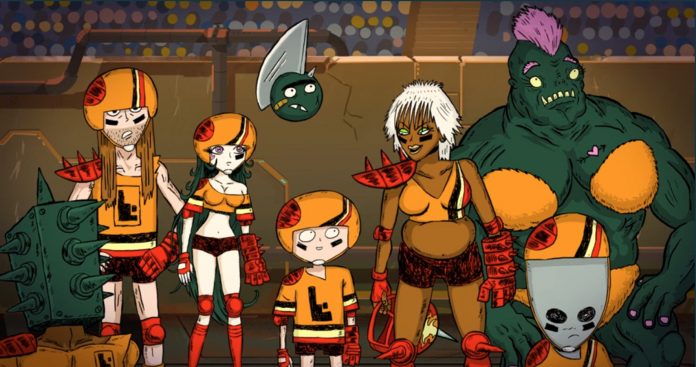 Due to COVID-19, the anime world has been on hold with delay after delay putting a damper on series fans genuinely enjoy. Whether it be a simulcast from Japan or an English dub produced in the homes of those involved, people try to keep things as normal as possible. Still, the delays have put Toonami in an interesting position and one I wouldn’t envy. And thus they had to make a quick decision on what to air now that JoJo’s Bizarre Adventure: Golden Wind will be delayed. Enter Ballmastrz: 9009, a western comedy series that pays homage to anime, and which makes perfect sense to air as a stopgap. Yet, from the reaction of fans, it looks to be more controversial than one would think.

Toonami was never an anime-only block. When looking back at their history during the Cartoon Network days, there were many non-anime series that graced Cartoon Network such as Justice League Unlimted, Megas XLR, and Batman: The Animated Series (the list goes on). There has been a Western animated series on this iteration (Adult Swim), such as Samurai Jack, Beware the Batman, Star Wars: The Clone Wars, and Symbiotic Titan. It’s funny because I’d argue that each of the series I’ve mentioned is remembered fondly by the Toonami Faithful. And as Jason DeMarco or any Toonami staff member would say, the mission statement is to show the best in action cartoons. Not solely anime. Yes, anime plays a large part, and in fact, a much larger part now. But excluding western animation would be negligent, for lack of a better word. If there’s an action cartoon that is ripe for the taking, Toonami should go for it, no matter if it’s anime or not.

Plus, from all the information I have gathered (I haven’t watched Ballmastrz: 9009 fully), the series is almost like a love letter to anime. It has the silly tropes that fill the anime world and hits a lot of what anime fans like—both action and comedy. After seeing the first two episodes, I’m intrigued and want to know how the series progresses. However, for the simple fact that this series wasn’t created in Japan, many Toonami fans will scream to the heavens asking why this series was picked up when there are libraries of fantastic anime series everywhere.

I get it. Toonami fans love their anime. I’d be interested to know how Toonami could strike a deal to grab a new series (an older one with an English dub finished). For all I know, all parties involved in making these deals happen aren’t readily available, making Toonami’s ability to grab new stuff even more challenging, which brings up another question. Do you guys want to see another Cowboy Bebop rerun? Considering the disdain whenever the word rerun is used, I’m more inclined to grab something that’s never aired on the block, even if it’s a non-typical series. It’s certainly a shock to the system, given how the lineup has been built for a while.

It’s how Toonami has built its audience as of late. For quite some time, the block has been just anime. And you know how people feel about change. Change equals bad. Having nothing but anime is always fun, since a lot of Toonami’s audience now sticks to anime, as evident by the blowback. I can understand the argument that being more of a comedy series; it’s more of a reason for some of the adverse reactions out there. But as a viewer who enjoys diversity in what Toonami airs, I’d love for more series that aren’t just shōnen air (and I love shōnen).

This debate speaks to the underlying problem that there aren’t as many action cartoons as there use to be, as far as non-anime series are concerned. Something that has been talked ad nausea here at Toonami Faithful so I won’t go into massive detail on that point. But if series like Castlevania, Cannon Busters, or Seis Manos were available (and not locked up by Netflix), you’re telling me those don’t fit the Toonami mold? Of course they do, but projects like that aren’t around as much as they used to, with Netflix throwing money at anything that look promising (much more than other places). But if any of those series were available, I’d be hard press to think of a reason why none of those could fit on Toonami.

And probably the biggest thing that I want readers to keep in mind that we are still in the middle of a pandemic. Everyone is doing what they can to stop the spread and keep everyone safe. So delays will happen, and at times we least expect it. Presently, Toonami was given a tough ask as to find a replacement and something short enough so they could come right back to JoJo down the line. And considering how last second this was, I can’t complain. Plus, I want more action cartoons that aren’t anime on the block to rekindle the magic that Toonami once had. Not only with diversity in genres, but animation altogether.