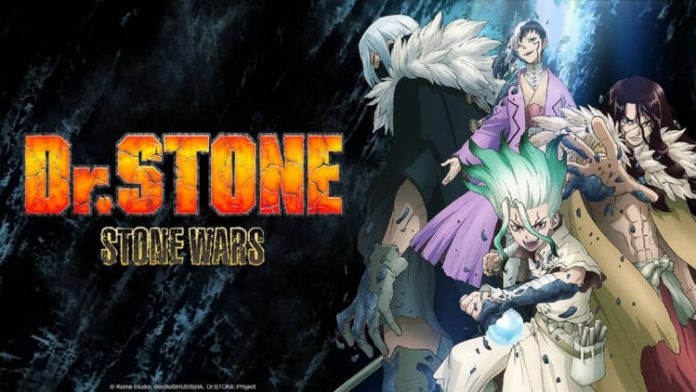 With Toonami’s launch of Dr. Stone’s second season imminent, I find myself once more looking at the Kingdom of Science with admiration and anticipation, and I imagine most viewers feel the same way. The first season created a massive collision between the ideals of restoring a scientifically-driven society as helmed by the protagonist Senku and a world ‘for the pure’ at the cost of many lives (with Tsukasa’s side). While skyscrapers and power plants may be a thing of the past, the concept of war isn’t, and you know there’s a ten billion percent chance of that happening this season. As Senku himself would say, get excited! As fans of Dr. Stone should brace themselves for a brand new story arc!

Dr. Stone: Stone Wars looks to continue to shift from the first season’s focus on discovery and survival to a conflict of ideologies and combat. The setup’s been laid before us, and a critical battle is taking place. Opposite of Senku, Tsukasa has an army of followers ready to break the kingdom of science to keep the world pure since Tsukasa views this as a second chance humans should not waste. But Senku believes that hindering advancement does nothing but harm the planet in other ways. And while Tsukasa has more might on his side, our brainy hero has several schemes up his sleeve. Many should be excited to see all the scientific wonders that come from Senku (considering how he’ll need to come up with a lot to bridge the gap between the two sides). Beyond the conflict, it’ll be fantastic to have Taiju and Yuzuriha back into the story as significant players once again. It’ll be interesting to see some of the more central figures from Tsukasa’s side as well.

As a reminder of what happened back in season one, the world as we know it has been turned to stone, reverting things to prehistoric times. The central trio of Senku, Taiju, and Yuzuriha are trying to survive the new post-apocalyptic stone world while also figuring out a way to advance the world back. That’s no small feat, and things get somewhat dicey when Senku and Taiju revive someone who was once stone, Tsukasa. As time moved forward, both Senku and Tsukasa began noticing the different ideologies and created tremendous tension. Tsukasa wants to rebuild the planet in his image where only the pure can live. The two clash with Tsukasa, believing he killed Senku (only for a bit), and our main heroes scurry away to formulate a plan to stop Tsukasa from committing genocide! This forces Senku to explore the stone world he once called home and later find a village. And as Senku befriends (or tricks) these villagers to join his quest for knowledge, it would appear that his desperation to stop Tsukasa will lead to a significant battle with the fate of the world at stake. If nothing else, seeing Taiju and Chrome in the same room should be a delightful mix of energy and excitement.

The big draw in Dr. Stone is on full display, seeing the clash of both ideological (modernism vs. essentially might makes right) and tactical opposites butting heads. But the reason this struggle is more enjoyable or impactful to watch is because of the two driving forces in Senku and Tsukasa. Tsukasa is a fantastic villain that’s easy to hate due to his murderous insistence on purity at the expense of innocent lives. He has an “ends justify the means” personality that reeks of the fascists this century, which clashes strongly with Senku’s ideals of everyone working together with their unique skills to a common goal. This mindset even won over Magma when he clearly stated he didn’t want to rule over anyone. The parallels to the past struggles and even today add weight to this story arc – it boils down in simple terms, who is right and who is wrong. But due to the nuance that both Tsukasa and Senku give for their ideology, it makes the story of Dr. Stone must-watch television.

Beyond the battles, it’s also interesting to consider the workings of the Tsukasa Empire. We’ve seen bits and pieces (primarily through Gen’s flashbacks) but barely know any of the rest. Fans have seen Hyoga and Homura, but that’s it. What drives any of the other members to be on board with an incredibly social Darwinist worldview that Tsukasa and Hyoga proliferate? That’s something that Dr. Stone has established since episode one, motivation. A massive conflict is about to begin because of the reasons of both Tsukasa and Senku. Which means it’s a vital component to the overall story of Dr. Stone. So while many will have their eyes glued on the leader of both parties, members on both sides’ motivations are a huge aspect as to why we should care. Can anyone be swayed? I’m not sure, but it creates impactful drama for everyone to look forward to watching.

Of course, no discussion on Dr. Stone would be complete without discussing potential inventions that we could see, which is easily one of (if not) the biggest draws of this series. With conflict looming, I think it’s fair to say we’ll see weapons – both conventional and unconventional make an appearance. Seeing Senku develop cockamamie inventions that seem impossible and then making them actually work is a delight beyond comparison. As exciting as the battles can be, I think the inventiveness of Senku is the absolute highlight of this series, as it keeps one guessing where the story will go next. Senku even decided to make a lightbulb from scratch, and when pressed against the wall, he used modern knowledge to make Katanas! These are wild, but the most outlandish invention showcased thus far has to be the “cellphone.” While it’s more of a radio, the fact that he didn’t stop at a line phone (which he did have to settle for the receiving end for now), he made sure it could adequately send that signal a reasonable distance! It’s incredible to see that a show’s biggest calling card isn’t about any battle or action sequence. Instead, it’s the curious minds viewers will have to wonder what Senku will come up with next (much like other science programs we’ve watched before).

As someone who has already read the manga portion of this story, I find myself drawn to how this specific arc will look and sound animated. And if it’s much like the first season, I expect it to be top-notch and am confident that this show will rock me (sorry, not sorry). Additionally, I am looking forward to the phenomenal voice talent at FUNimation providing us with dubbed excellence. Ultimately, Dr. Stone: Stone Wars looks incredibly promising with unforgettable narrative hooks, characters, and visuals ahead of us; we Toonami viewers appear to have every reason to get excited!