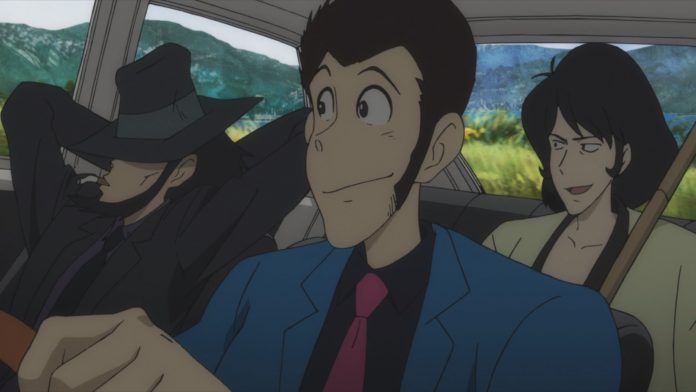 It might be weird to talk about honesty in a Lupin The 3rd article, but I have to come clean about something: I know next to nothing about the franchise. Outside of the Detective Conan crossovers, the Part V TV anime, and the screening of Goemon’s Bloodspray and Fujiko’s Lie at Anime Expo, I haven’t seen much of Lupin. Though I’d like to think this puts me in a unique position to talk about the series as someone who’s a “newbie.”

Lupin the 3rd Part V is currently airing on Toonami, and I had the pleasure of experiencing the series subbed on Crunchyroll weekly for half a year. As mentioned before, I had experienced Lupin in small bits, so I was familiar with the franchise as a whole, but not the moving parts. Though that is perhaps the magic of Lupin – you can dive anywhere with only the basic knowledge of the franchise and not feel alienated by 50 years worth of history. Even if one hasn’t seen a single episode, it’s likely that they at least know the franchise’s basic beats as they are a massive part of Japanese and anime culture. When Part V was about to begin airing, I thought, “Why not get into the series with the newest work?”

Even without seeing other Lupin series before it, I could tell that Part V is an attempt to bring Lupin’s adventures into the modern era. I wouldn’t be surprised if there have been other attempts to do so before now, but it feels like that was the focus of this series. Though this isn’t a story of “Lupin vs. the present.”Instead, it feels more akin to how the legend of Lupin endures through the ages and creates its own epoch while blending in with its surroundings. After all, the first episode features Lupin up against the entire internet as he tries to steal digital currency from the dark web. It doesn’t get more modern than that!

Have you watched Lupin the Third and is it worth jumping onto? — I watched Fujiko Mine and Lupin Part V, its easy to jump into any part and generally follow along. https://t.co/Vh1zdFfB6n

I don’t intend to spoil too many events for people watching the Toonami run, or those who like me haven’t seen very much of Lupin but I think a little bit of a run-through of how this series embraces some modern sensibilities is important. Lupin being the target of a manhunt is one thing, but when that manhunt is almost exclusively done online through the prying eyes of smartphones and the omnipresence of social media it’s clear that this series is making bold steps to bring the classic into the present. The big bad of sorts to is the man running said social media platform so while at first this doesn’t seem to figure into the bigger picture it is important to keep in mind. Lupin and his gang (outside of Goemon, but being wedded to the imagery of a samurai is his thing.) seem to fit oh-so-well into this backdrop despite stealing what isn’t nailed down for the past 50+ years. In fact I’d go as far as saying that technology is the star of this Lupin series more so than the thief himself as another arc features a country’s struggles of keeping to its foundations and cultures vs updating to a modern age and how that leads to an almost coup between the traditionalists and those who want to move forward. The writers do a good job of weaving these elements into the tried and true Lupin formula, and they are aided in part by Monkey Punch’s strong characterization.

It’s worth noting that while the animation and character designs for the series get updated through the years, the core function of the characters and their personalities stay the same. A challenging prospect to the writers as one would want to update the series so that modern audiences can enjoy it, but not change things so dramatically as to alienate longtime fans. While I’d need to see more of the franchise to know for sure, what I have seen has a consistency that can be attributed to Monkey Punch’s strong characterization. There are a few episodes of Part V that aren’t about high-stakes thievery. Without strong characterization could slow and possibly harm the momentum the episodes before they had. Owing to Lupin, Goemon, Fujiko, and Jigen having strong agency, one can’t help but want to see all aspects of their lives –even the less explosive parts. For instance, there’s an episode about a clogged toilet, which is entertaining because of these strong personalities clashing against each other.

As for my feelings? I’d say that I’m looking forward to more Lupin. I intended to watch Part IV, but time hasn’t been on my side (plus it is on so late). At the very least, I know that I can confidently work my way back through the series, or in any order that I wish, and still have a great time with Lupin and company. If you’re watching Part V on Toonami, I guarantee that you’re in for a great time. With more Lupin stories coming out of the woodwork on an almost annual basis, I have a feeling we’ll be enjoying the thief and his friends for a long time to come, and I’m glad to have jumped into the series properly. I’m anticipating that the series will all offer stories that will thrill and entertain through its different interpretations and incarnations, and I’m looking forward to diving deeper into it!

Sakaki is an Editor-in-Chief at Weekly Shounen Sunday edition and a contributor at Toonami Faithful. Feel free to follow at @kiirobon or @wsstalkback