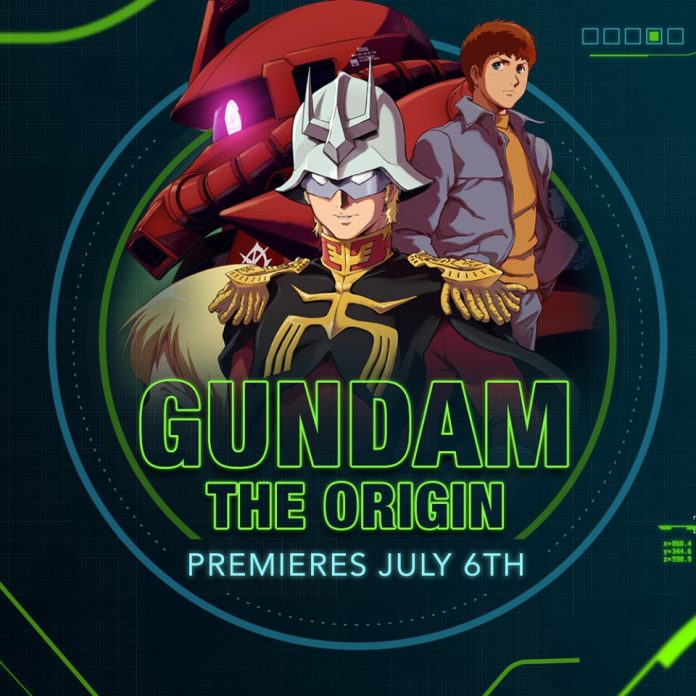 During the Toonami PreFlight Panel on Momocon 2019, Toonami has announced that the Gundam franchise will be making its return to Toonami after a year hiatus with The Origin series, which will be making its premiere on July 7th. Origin will be the third Gundam series to have aired on Toonami in the modern era, after Iron Blooded Orphans and Unicorn.

Based on the manga written and illustrated by Yoshikazu Yasuhiko and published by Kadokawa Shoten from 2001-2011, Origin is a 6 episode OVA series that is a prequel to the original 1979 Mobile Suit Gundam television series and was released between 2015 and 2018. The OVAs have been converted into a 13 episode series for television broadcast, which began airing in Japan in NHK on April 29.

U.C. 0068 – Zeon Zum Deikun suddenly dies while giving his speech to declare the Autonomous Republic of Munzo’s independence from the Earth Federation. As Munzo falls in turmoil while the House of Zabi rises to power, Deikun’s children Casval and Artesia flee the colony to Earth. In the years to come, Casval and Artesia live in secret while the Principality of Zeon develops its military power before finally declaring war in January U.C. 0079.

Also during the panel, Toonami also showcased a new trailer for the upcoming return of Lupin the Third for Part V. The new season of Lupin will premiere on June 15, replacing JoJo’s Bizarre Adventure with the conclusion of Diamond is Unbreakable. The announcement of the dub premiere of Golden Wind still to be announced.

This is the first time I’m seeing the dub for Lupin The 3rd: Part V. Can’t wait to see it alongside all of you! pic.twitter.com/jyQtVzNK6x

In addition, as part of Toonami’s new partnership with Crunchyroll, all 12 episodes of both FLCL Progressive and Alternative are now available to stream subbed in Japanese on Crunchyroll’s streaming service.

During the panel, two other shows have been announced to be coming to the better cartoon show in the near future. However, on request of the show’s distributors, the show names and release dates are not to be announced at this time.

What are your thoughts of Gundam’s return to Toonami? Let us know by commenting blow or directly on our social media.