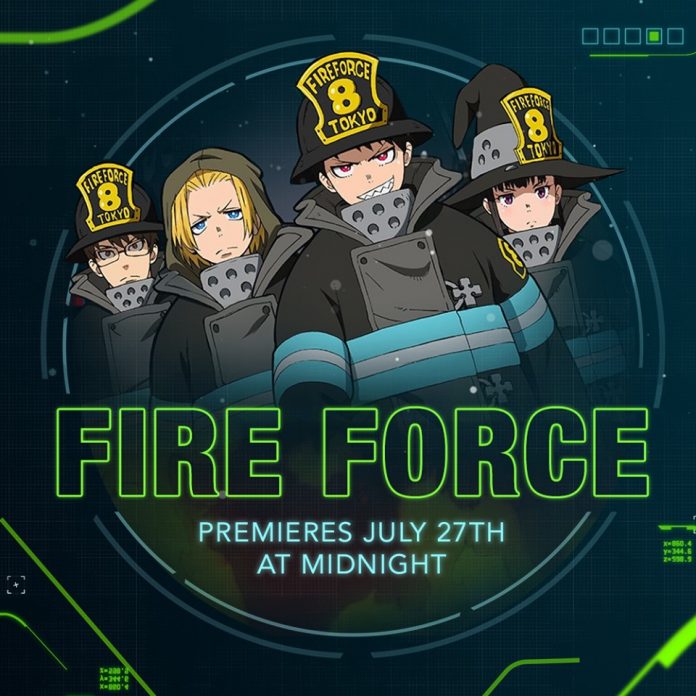 On Twitter, Jason DeMarco revealed to fans the series that will be joining Toonami on July 27 being FUNimation’s newest hit Fire Force. The series only recently began it’s simulcast run, and has its first two episodes dubbed in English. Fire Force is slated to go 24 episodes long, per ANN. However, there are rumors that the series will have more episodes down the line (totaling 48). So it is unclear as to how long Fire Force will be on Toonami. It will premiere at midnight as it will follow Attack on Titan (which will air on 11:30 P.M.).

#Toonami fans, thank you for your patience. I can FINALLY announce we will be premiering FIRE FORCE on July 27th at Midnight! pic.twitter.com/DRqa6qfRU5

Some might notice a familiar art style when watching this series for the first time. This franchise was created by the writer and author of Soul Eater (Atsushi Ōkubo). For those who might have forgotten Soul Eater previously aired on Toonami in 2013.

The synopsis of the series on ANN is as follows:

However, due to the recent tragedy at Kyoto Animation Fire Force’s third episode has been postponed to air. Kyoto Animation studio one was set on fire where 33 people lost their lives and 35 more were injured. Since this series heavily involves fire as well as people bursting into flames, it isn’t difficult to see why the episode was postponed. It’s unclear as to how or if that will affect it airing on Toonami, but it’s a question that will pop up and will probably be answered as time moves on. It will depend on how long Fire Force is postponed or if being postponed in Japan can hinder it airing on U.S. television. But the future of the series is up in the air as we await to what the plan will be when it comes to episodes getting released.

Fire Force is still a solid addition to Toonami as they were able to negotiate a deal to get a popular summer simulcast on the block as soon as they could. I’m sure a lot of fans are interested in seeing and now won’t have to wait as long as the simulcast viewers do to see a newer title.

The rest of the schedule will look like this starting July 27.

What do you think about the recent addition of Fire Force to Toonami?