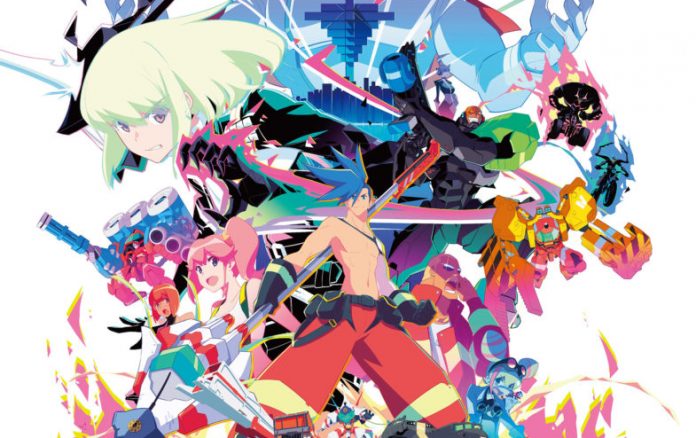 When I attended my first Anime Expo last year, the most memorable part of the experience was Studio Trigger’s panel. The staff at Trigger are not only immensely talented, but they openly engage their fans in a way that few other animation studios do. As a result, you can truly feel their love for animation in every inch of their work, leaving an incredibly strong impact on their viewers. After last year’s fantastic premiere of SSS.Gridman, Trigger one-upped themselves by debuting their long-awaited feature film Promare at this year’s Anime Expo. Promare reunites prolific director Hiroyuki Imaishi and writer Kazuki Nakashima, the duo responsible for both Gurren Lagann and Kill la Kill. The film was first announced at Anime Expo 2017, so it only made sense to bring the US premiere to the same venue as well. With expectations as high as they were, Promare had a lot to live up to, but in classic Trigger fashion, it went beyond any of them.

In the panel for Promare and Studio Trigger! #AX2019 pic.twitter.com/EwHp8SBnpL

Promare is about a man named Galo Thymos, a member of the Burning Rescue Fire Department that fights against a group of fire controlling mutants called the Burnish. Through Galo’s efforts, he eventually encounters the Burnish leader Lio Fotia and begins to unravel the hidden truths of his world. Promare’s plot is relatively simple, but that simplicity is to the film’s benefit. The world of Promare is not bound to logic, and with that limit removed, it allows the staff at Studio Trigger to place all their craziest ideas into a melting pot. The net result is a film that continually defies your expectations, and leaves you on the edge of your seat until the very last second.

The characters of Promare fit a lot of the archetypes that have been present in Trigger and Imaishi’s previous series, and that is a part of its charm. As you’d expect from Galo’s design, his personality is quite similar to Kamina from Gurren Lagann, someone reckless yet incredibly ambitious. Meanwhile, Lio serves as a foil to Galo’s bombastic characteristics, being portrayed as a calm and collected individual. The interactions between Galo and Lio help establish the underlying tension between their two factions, and that makes seeing them influence each other throughout the film all the more enjoyable. While the rest of the cast isn’t particularly deep, they each have their own personalities and quirks that make them entertaining. The antagonistic character of Vulcan is an excellent embodiment of over the top cruelty that makes him a joy to see whenever he’s on screen. The female cast members lack in numbers in the film, but the ones that are there are great. Both Aina and her sister Heris each get their moments to shine, and inventor character Lucia is a constant source of entertainment. Overall, the cast of Promare is what you’d expect from a Trigger production, but that’s far from a bad thing.

From a visual standpoint, Promare is stunning. The film uses a vibrant color palette that allows both the characters and environments to stand out even in the most fast-paced sequences. You can’t have a Trigger production without some crazy animation, and Promare blows even those high standards away. The film opens with a fight scene that could very well be the final battle in any other movie, setting a high baseline for what’s to come. Credit also needs to be given to animation studio Sanzigen, who was brought on to help with the CG sequences throughout the film. The CG animation is impressive, as it never appears jarring against the surrounding environment, and the cel-shaded look helps it match the 2D animated scenes perfectly. It’s clear that a lot of thought went into perfecting the delicate visual balance of the film, and it has paid off in droves. Promare doesn’t look like any anime film in recent memory and has a unique presence that loudly screams Trigger’s name.

During the post-film discussion at Anime Expo, producer Hiromi Wakabayashi mentioned that they wanted the film to serve as a celebration of Trigger’s history, but also an introduction for people unfamiliar with their work. As such, Promare is filled to the brim with references to previous Trigger series. From the mechanical designs to entire sequences, there are countless callbacks will make Trigger fans jump for joy. As Wakabayashi said though, these references are also meant to introduce themselves to new fans, and I feel they succeed in doing that. The visual cues feel cohesively implemented into Promare’s existing tone, making it so that anyone can get excited from seeing them. Trigger has always had a great sense of engagement with their fans, but Promare shows that they also understand how to foster new fans through their work.

I knew from the outset that Promare was going to be a visual treat, but what I was not expecting was to be blown away by its soundtrack. I have always been a fan of music composer Hiroyuki Sawano, but he outdid himself with Promare’s musical score. Each song feels varied, corresponding perfectly to both the high tension and somber moments throughout the film.  I especially love the vocal track “Inferno” sung by Benjamin Anderson and mpi, which helps establish an upbeat tone whenever it is used. The Japanese band Superfly was also brought on to provide two vocal songs for the film, and their work is fantastic. The first of these songs, “Kakusei”, which is used as Lio’s central theme, is still stuck in my head. Its use within the film itself is wonderfully done. The stellar music of Promare serves to immerse you into its world of action and insanity further, and it completely hits the mark.

While a lot of Promare’s appeal comes from its hoards of action and pleasing aesthetics, it’s worth noting that there is narrative substance underneath all its flare. The most apparent theme of the film can be seen in the discrimination of the Burnish within Promare’s world. Throughout the film, the Burnish and normal humans both share a feeling of animosity towards each other. Because of the respective hardships and treatment they’ve faced from the other faction.  Imaishi and Nakashima have explored similar themes of discrimination through the relationship between the humans and beastmen in Gurren Lagann. And the message they conveyed there about mutual understanding and unity holds true in Promare as well. The bond built between Galo and Lio in the film shows that these two groups can overcome their conflict and work towards a better future together. Imaishi also opts to color code particular objects and clothing in a manner contradictory to common association. Having darker colors represent “good” while lighter colors represent “evil.” For instance, Lio de Galon, the signature mech of Promare, is black while several of the enemies that our heroes face appear in white. This code helps bring further attention to the warped moral dynamic within Promare’s world and provides the viewer with a perspective contrary to their expectations. Promare isn’t meant to be a particularly deep film, but what is present within its narrative is still interesting to ponder.

Promare was a film that I knew I was going to love, but I would never have imagined it would exceed every expectation . From its crazy action to its energetic cast of characters, there’s so much to enjoy. This project may be the best anime that Imaishi, Nakashima, and Trigger have ever made. It has quickly become one of my favorite anime films of all time. If you weren’t able to see the movie  at Anime Expo, you’re still in luck since GKids will be screening Promare in select theaters this September. Promare is a must-watch for any lover of animation, and I can’t recommend it enough.

Pros: Amazing action and animation, stellar soundtrack, and a homage to the best of what Trigger has to offer.