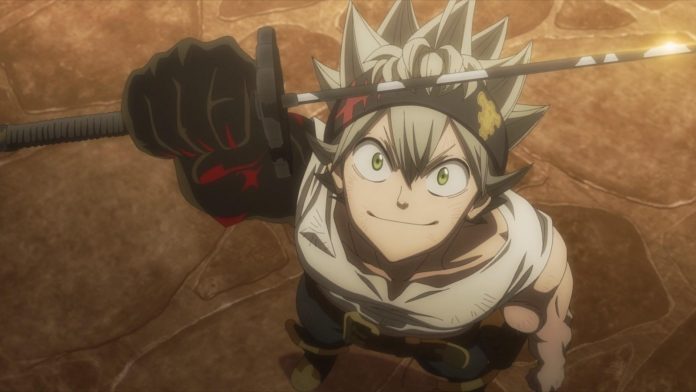 I remember it like it was yesterday. The announcement Toonami made when fans were ready for the biggest shōnen series to air on the iconic block. Only it wasn’t My Hero Academia like many were hoping. Instead, Toonami decided to go in another direction and grab the series everyone had an opinion about in Black Clover. I reveled in it because I love a series for all its strengths and weaknesses and was thrilled that Black Clover would have its chance in the sun, on the best place for action cartoons. And yeah, it took its lumps from critical fans, but a trend started to emerge as time moved forward. I saw less and less of the cheap shot, low-hanging fruit comments that skeptics littered with the first few episodes. But instead, adulation watching Asta never giving up. Praise due to the story-telling and the fantastic animation in big moments. Things that I would not believe back when it debuted on Toonami all those years ago (Dec. 2, 2017). Black Clover was able to make it through its entirety and create something that hasn’t been seen on Toonami in a long time. Be a defining series on the Adult Swim Toonami era.

That certainly is a sentence to take in. Can we say Black Clover is a defining series on Toonami?

It’s something I’ve been quoted to say on numerous episodes of the Toonami Faithful Podcast. Sure, I’d argue that series like Dragon Ball Super, Dragon Ball Z Kai, and One-Punch Man are part of the illustrious group of defining series on Toonami. You could even throw in other shows like Attack on Titan, Sword Art Online, Naruto Shippuden, and Akame ga Kill to this group; I’m not opposed to that. I’d even say that most if not all were more critical acquisitions than Black Clover when it happened. But unlike most (since the Dragon Ball franchise has been on Toonami for longer) of the series mentioned, Black Clover has been on the block continuously for nearly four years! Instead of the breaks that usually come with anime, this series continued. After 13 episodes, Black Clover had more stories to animate. After 50, the series did not plan to stop and went beyond. Not even at 100 episodes did Black Clover finish at giving fans a spectacle to watch. The magic number was 170, and with that, the maligned property cultivated a passionate fanbase with Toonami’s viewers to become one of the block’s most beloved in the process.

It speaks to the quality of the series, which has been written by both myself and staff writer Marion Peña. This series does a ton right, and I believe the more fans saw that the more merit it began to grab. Not only was the underdog story of Asta (and, to a lesser extent Yuno) exhilarating to watch, especially since both were breaking the socioeconomic structure that’s been in place at the Clover Kingdom. But the fact that every Black Bull got a moment to shine became a massive boon for the series. It wasn’t just the Asta, Noelle, and Yuno show. Don’t get me wrong, they all thrived and grew astronomically. But we got tremendous growth from characters like Luck and Vanessa that made them look like main characters. Heck, we even see remarkable character growth from Klaus, who was initially prejudiced toward Asta and Yuno. Only to become one of their strongest advocates when confronted by a royal.

So seeing more characters than just the leading trio over and over prevail (something My Hero Academia could improve). It allows us to grow with everyone in a magic knight squad and creates this feeling that we are also a part of any of them. We have a better understanding that Charmy is more than just someone who loves food. We find out that Charolette has a massive crush on Yami and doesn’t know how to show him. Plus, we learn about Finral’s family history, which makes us root for him even more, despite always acting like he’s down bad. Getting to know the characters we will spend a ton of time with helps make the journey more enjoyable, which is something Black Clover always nails.

But a series needs more than just the strength of never giving up. Black Clover, throughout the years, has brought fans some absolutely amazing fight scenes. Some that will make everyone notice and talk about for the next 24 hours. There were just so many that will always make me smile remembering. Such as the entire Black Bull squad taking on Vetto in Seabed Temple Arc, where we watched Vanessa and Finral use their distinct magic to help Asta prevail (in a very dire fight). Or getting to see Yami and Licht throw down in a battle that seemed too soon to have happened (it looked spectacular). And I certainly won’t forget getting to see every magic knight captain in the Clover Kingdom throw down in what I can only describe as movie quality animation. Which only continued, especially as Toonami fans are about to see the conclusion to Asta and Yami taking on Dante. But these are only a few of some of the beautiful fights that are all over Black Clover.

Much like how Deku vs. Todoroki help spark even more interest for My Hero Academia, Black Clover and anime fans got that with Episode 63 when Asta’s body is taking over by the devil within. Seeing that fight against Ladros still gives me goosebumps, and I doubt I’m alone in that. It was so crazy the staff of the episode couldn’t help but excite it up. And many fans still look back and mention how spectacular it was! Plus, having that awe-inspiring defining episode helps to build a case of how fantastic a series is. And while this particular episode is the first to grab people’s attention, Black Clover is chock-full of breathtaking moments for viewers to watch!

And I think that’s how I got to this idea that Black Clover is a defining series acquisition for this generation’s Toonami. It was on a long time and was able to connect with viewers in ways other shows can’t (due to their length). Being one of the longest-running series to air on Adult Swim’s Toonami is nothing to sneeze at and is only eclipsed by the two vast titles of One Piece and Naruto Shippuden (if you want to lump every Dragon Ball series into one, then that’d be three). So the fact that Black Clover has had all the time in the world to showcase why people like myself champion it helps create this fantastic organic feeling of comradery, and nothing has matched this since. Fans were able to grow with the Black Bulls, and seeing how the merits of the series continued to pile on, it became difficult to dismiss it as a “ho-hum” acquisition.

Hunter x Hunter and My Hero Academia are a couple of series that feel close to what Black Clover created for their own community and identity on Toonami. But I’d argue their popularity is more of a case of their online footprint than anything. I didn’t start seeing the love of Black Clover be so universal until AFTER it aired on Toonami. Leaving me to say, Black Clover did more to ingratiate itself with Toonami fans. And no, that isn’t to say other shows are bad and only Black Clover is good. I’m mostly speaking about how the series became more of a favorite as time progressed and grew to what it is now. Having a Toonami audience behind a property is no joke, and I’d say it played a pivotal part in solidifying Black Clover’s place in the minds of anime fans.

We saw a lot of unforgettable moments, especially during the last couple of arcs in Black Clover. The overwhelming love for Charmy, who got to showcase her power in the latest story arc. Or getting to meet the Dark Triad on TV now, considering how popular this part of the story is! Black Clover continues to pop off, and it becomes a bit somber thinking that this weekend will be the final one for a while. Fans grew to love it after the initial backlash. And those that stuck by it are rewarded in a complete run and watching the fan base grow more by the day. I’m speechless, and that’s why I decided to write this “love letter” to show my appreciation toward Toonami for airing it, FUNimation for dubbing it, the fantastic cast and crew, as well as the fans who tweeted every night. For now, this is the swan song, and I’m hopeful that if more episodes are made, Toonami will be the only home for it. And we better keep getting those fantastic openings because every one of those was a hit. Black Clover was a defining series of this era, and the fact that it never gave up and continued to air is a testament to property as a whole.

Thank you, Black Clover. Thank you for everything.

CJ Maffris is Editor-in-Chief at Toonamifaithful.com. Feel free to follow CJ on Twitter @SeaJayMaffris to see all of his terrible anime takes and Fena: Pirate Princess commentary!

Don’t forget to listen to the Toonami Faithful Podcast! The number one podcast discussing all things Toonami both in news and commentary about the iconic action-cartoon block!