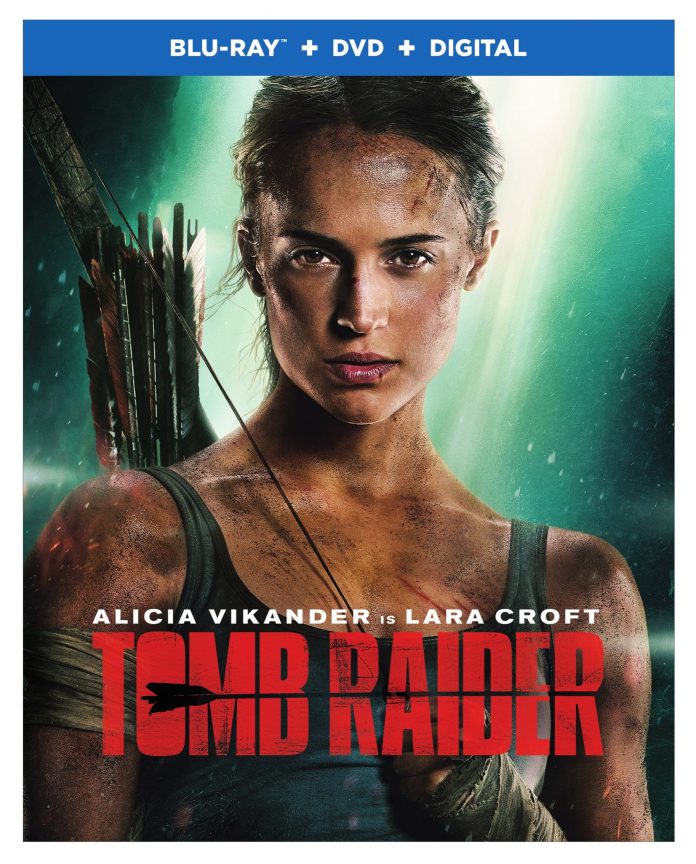 Seems like ages since this was at the theatre. It was only back in March…but was there, maybe, for all of a month. I never got to see it proper, so this Blu-Ray experience was fresh, instead of re-treading previously-viewed ground.

Story-wise, it’s a loose interpretation of the 2013 Crystal Dynamics videogame—at its core, the movie is true to what has made the new “prequel” games so instantly iconic, in their own right. It’s an origin story for Lara—which, I suppose, is a bit like Spider-Man’s origin story; it’s been covered so many times, it seems hardly necessary to do it again, but, in crafting the film adaptation, there needs to be backstory…even if it is a hard left turn from fan expectations. I love the reboots; seeing what made Lara into the “let’s get this sorted” name-taker we were first introduced to, way back in the day, is cool.

Roar Uthaug and his crew—hats-off to the production designer Gary Freeman and the special effects department—bring this strange world to life. Shot mostly on-location in South Africa, the few sets that are built weave so well into the natural environment as to appear whole.

Watching the included special features lends to the craft that was put into making each effect and location seem as gritty and raw as is cinematically possible.

The “Tomb Raider Uncovered” and “Breaking Down the Rapids” featurettes, specifically, speak to the amount of work and testing that went into set-pieces like the old WWII bomber (a nod to the game), which came in three separate parts, and how star Alicia Vikander (The Danish Girl, Ex Machina) watched her four stunt doubles run the courses so that she could jump in and do most of them on her own. With little help from wires or other supports, sequences like the rapids were actually filmed on a set, with the only CGI being applied as face-lifting in post-production; everything we see is Vikander really faring among the rapids, on a closed-course—like an extreme version of a waterpark’s “lazy river” ride). She’s in great shape for the role—went through rigorous training to get toned and be able to pull off half of what she does in the movie. Uthaug had a vision, and one that his crew shared in bringing this world to cinematic reality.

Daniel Wu (AMC’s Into the Badlands) is not his typical martial arts master here, but elected during shooting to have his character toned-down, either to emphasize Lara, or to make a statement that not every character has to play off established stereotypes; sometimes, the guys aren’t the hulking action heroes we seem to be surrounded by. Dominic West (300, The Wire) as Croft, Sr., is cool and charming, with that tinge of mystery about him that—as in the games—is what sets Lara on her path. She wants answers, as that’s the only way she can feel close to her father again. Walton Goggins (Predators, The Shield) is, perhaps, one of my favorite things about the movie. His role as “baddie” Mathias Vogel is something we don’t see a lot, nowadays: A rounded antagonist—not a villain, as his intentions aren’t evil (he’s just doing what he’s told, at the behest of the shadowy organization, Trinity). His motivations are pure—find the macguffin, he can go home to his family. But his scope is lacking; he doesn’t see the bigger picture that Lara and her father do. A tad selfish, but not without depth.

I didn’t know what to expect, here. Videogame adaptations have been hit-and-miss since they became a thing; how does one adequately translate player experience—and control—into something an audience simply watches? It’s a tough gambit, but the work done here is admirable. Plenty of nods to the games and the prior two movie attempts, a score that’s identifiably Tomb Raider, and a pair of twists that could make even the most-seasoned critic do a double-take, I’m going to chalk this one up as a win.

It’s a small step, but one in the right direction.

In “Evolution of An Icon”—another Blu-Ray-included featurette—some of the minds closest to the franchise and who know it best give their two cents on what Lara used to be, and what she’s turned into. It was important to Uthaug and his crew to “get her right”, as it were, and doing so meant harnessing the lightning in a bottle that was the reboot games. That grittier, inexperienced, fledgling Lara is more relatable, is looked up to by younger women in the audience who—outside of superhero flicks like Wonder Woman and female-centric rehashes of the Ghostbusters and Ocean’s IPs, for example—don’t really have a lot of heroines to aspire to.

Final Score: 7 out of 10. A hopeful start to a new franchise. Action-packed and a popcorn flick in all the right ways; familiar bones, with a fresh coat of paint.