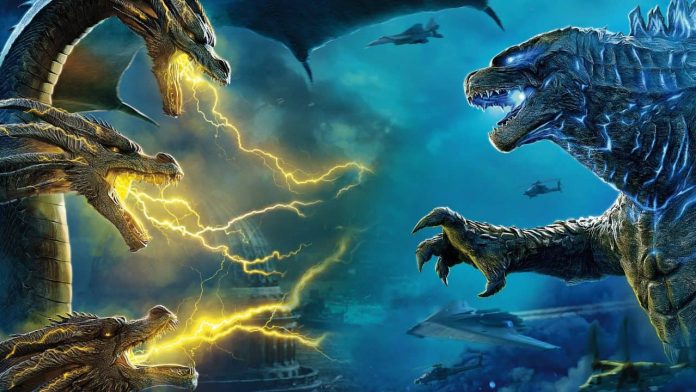 Not much has changed about my opinion on Godzilla: King of the Monsters (KotM); from the first viewing to now, it’s still a-rockin’ time, from start to finish. I had a blast in the theatre alongside other Godzilla fan-friends of mine, and now that it’s out on Blu-ray, I can revel in the excitement and boyhood splendor whenever I wish.

When analyzing the film, I found the script to be middling. It’s a standardly-structured story that doesn’t do anything to surprise me. And what one “good” twist the writers threw in, true fans can see coming a mile away. I would say it was the trailer for the film that gave the twist away. Despite some nice bits of foreshadowing, though it was the characters that carry a lot of the human-centric moments. While this film does what the 2014 chapter should have—include more monster brawls—there’s still a lingering human element that doesn’t quite click. And, to an outsider, it’s even more of a deterrent than to a die-hard fan of the old Toho stuff, like myself. Kyle Chandler (Super 8), Millie Bobby Brown (Netflix’s Stranger Things), Ken Watanabe from the first film, and Bradley Whitford (Cabin in the Woods) are what drive the film when scenes shy away from Godzilla and his adversaries. What the original Toho movies did was concentrate on the brawls and the Earth-reshaping encounters these creatures had with each other. Unfortunately, we get more of that, this go-round; focusing on the human aspect, rather than making it a sub-plot or go away, altogether, is a mistake on the writers’ part. Fans come to see fights, not boardroom delegations and tired clichés. I know I’m not alone in having this opinion.

Graphics-wise, I’m thrilled. The creatures look great, and I’m glad to see the filmmakers are still clearly comfortable with showing off their state-of-the-art tech on-screen. Visually, I think Michael Dougherty was the right choice to put a new directorial spin on the franchise. He’s always shot his films well, and it was a pleasure to see his work within an alien IP. Despite the clunky, “slideshow-ish” presentation two-thirds of the way through, what was on-screen contributed to the story and character arcs. In spite of some plot conveniences, awkward news broadcast-type sequences, and cringe-worthy ADR and post-production mixing, I had just as much fun on this viewing as during the previous two theatricals.

I liked the use and revitalization of the creatures’ old Showa/Heisei-era themes and sound effects (which I’ll go into detail later). Bear McCreary’s musical work is fantastic and reinvigorates that ten-year-old spirit in me, first discovering the camp, kiddy Godzilla movies of yesteryear.

The special features roll automatically after the Blu-ray’s conclusion and end-credits scene. My guess as to why that is would be the case would be to mitigate the grueling amount of time spent perusing each snippet.

I enjoyed the kaijus’ mini-bios. Each of the main monsters gets their own 30-second featurette, talking about each one and how they were incorporated into the plot. However, this should have been organically juxtaposed with the more technical side of the characters’ design process. I found it interesting finding out what sound design was used in crafting exclamations and how motion-capture technology was used in getting more “real” performances out of Godzilla and Ghidorah. But lump all their character-specific stuff together, not have it spread out throughout multiple featurettes. It would have all fit together nicely in one big featurette, rather than smaller, clip-sized ones that seemed to drag on and retread the same ground.

It goes the same for the features regarding the set-pieces. Nice to see how practical effects and creative thought went into building these locations. However short a time the story focuses there, but streamline it into its own, practical effects work-focused feature. Giving each aspect of design or creature/character its own mini-doc is tiresome. I found myself fast-forwarding between some of the bits by the end. I calculate that I spent almost as much time on the featurettes as the actual feature film. There are just too many special features—or, at least, too many split-up featurettes. Stitched-together or somehow organically-flowing may have made for a more engaging experience.

Overall, and despite the chug through the special features roster, Godzilla: King of the Monsters manages to retain its 8 out of 10 rating.

Looking forward to where Legendary and Warner take their MonsterVerse, though, with Godzilla vs. Kong—presented by the brilliant Adam Wingard (dir. You’re Next, V/H/S), arriving in 2020.