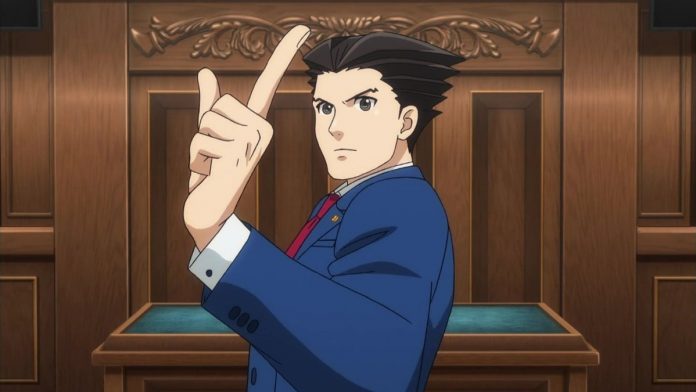 Having anime seasons of the hit video game franchise Ace Attorney is a dream come true. While I enjoy my play-throughs and watching YouTube videos of turnabouts, there’s something magical when everything Ace Attorney provides can be condensed in an anime. It can make the viewing experience a lot easier. Plus, it can create new fans for the franchise, causing more people to check out the games that inspired the anime adaptation (much like how anime can account for manga source material). And you’d think with two seasons of Ace Attorney, that would mean we have ourselves a decent anime. But sadly, I think this series received another season based on the nostalgia and old fan base coming out in support of the property. Seeing that Ace Attorney has this support is excellent to know, but I’m left feeling disappointed at how the second season has gone thus far.

The second season is an adaptation of the third Ace Attorney game (Trials & Tribulations), although the anime skips over the turnabout where Mia Fey defends Phoenix five years before the events of this game/anime takes place (with Phoenix’s girlfriend being the culprit). It was a critical backstory moment in which we learned that it was this case that convinced our plucky defense lawyer to change his major and follow in Ms. Fey’s footsteps. Instead, fans begin with a turnabout in the second Ace Attorney game (Justice for All), where Phoenix Wright is attacked from behind and has amnesia as he defends his client in a murder case. Of course, Wright would figure things out in the end, but I found it odd how this turnabout would kick off the second season since it was omitted before.

Typically I’d go over every turnabout that the release goes over, but considering how long that can get, I’d prefer to say which cases were adapted in these chunks of episodes and which cases were not. Since the first part of the second season has 12 episodes, viewers see both Stolen Turnabout and Recipe for Turnabout alongside an original anime turnabout called Northward.

A lot of the problems that the previous season faced are on full display once again. And what makes it more frustrating this time around is that Cloverworks felt the need to add filler in this season instead of possibly giving the two canon turnabouts more time to breathe. Both felt too rushed, and because there are four episodes from content that isn’t canon, it leads me to wonder why. One of the best aspects of Ace Attorney (the video games) is how you can figure out all the answers at your own speed. You aren’t married to a clock or have a time limit to figure things out, and given the time constraints anime episodes face, it can lead to decisions to speed up the plot. And that’s troubling, considering that these two turnabouts (Stolen and Recipe) had some interesting plot points that I would’ve loved to see explored more. In Recipe for Turnabout, the culprit Furio Tigre impersonates Wright and poorly defends the defendant who is blamed for the murder Tigre committed. It would have been something special to see Wright go through the appeals process, since it was not he who defended the client. Instead, Dick Gumshoe waltzes into Wright’s office to berate him for the poor job that he did. To be able to explain all that, I think the series needed to have more episodes. However, they did when you think about it.

One of the best turnabouts in Ace Attorney was passed over and would have been a much better experience than the Northward story arc. Rise from the Ashes is my favorite turnabout, which deals with deception and underhanded tactics by those the public trusts most. In Northward, since we deal with the shady nature of the U.S. legal system, I’d find Rise from the Ashes more compelling due to how bad things were for Wright, as well as how fantastic the cast of characters was in that case. So if there was content from the games to be used, why not take that route instead of Northward? It was fun in a ridiculous way, which can help in an Ace Attorney property and help tie Miles Edgeworth in more. Still, I feel like Cloverworks dropped the ball and missed a fantastic opportunity to adapt something extraordinary.

And for a series that initially was praised for being faithful, it wasn’t all that faithful here. Maybe that has something to do with the switch in the studio, but starting seasons with turnabouts from different games can have those who haven’t played them a bit confused. I would argue that the anime was trying to make a more coherent story for anime-only viewers, but this project should be used as a window to check out the games. And with things out of order, it could lead to some players becoming confused and potentially put off. If it is praised for its consistency earlier, it will be the opposite if it isn’t followed.

So while I enjoy seeing Ace Attorney adapted, I seem to have this bad taste in my mouth, wondering what might have been if Cloverworks handled ace Attorney differently. Why not take the time to showcase more from longer turnabouts to get a full immersion effect? Mostly in season two, things felt rushed. Seeing the many issues Ron DeLite faced in his two trials (from Stolen Turnabout) made it evident that the pace would be going at breakneck speed. It didn’t allow for any digestion of information, and I think the biggest issue is that Ace Attorney is 30 minutes long. If this series copied what other American law series do (hour-length), I think many of the execution issues wouldn’t be there.

Don’t get me wrong, it was awesome (as a player of the series) to see and hear some more characters animated and speaking (Godot and Tigre especially). But it felt as if the anime was banking on that kind of nostalgic reaction to bypass the flaws that were on full display. Much like how anime is an advertisement of its source material (manga), so this project was for the games. The goal should be to help create more and make the franchise more popular to continue making new games. Instead, this feels more like a thank you letter to the old fans that wasn’t up to snuff on what anime fans (and video game fans) expect from popular titles.

And that doesn’t even begin to equal my disappointment with the animation quality of this series. The same issues that plagued the first season are also completely on display here. This does nothing but hurt the shine of Ace Attorney and its stories. With off-putting shots of characters, I wondered what was the overall goal this anime was trying to accomplish. Because I’m sure, many other die-hard Ace Attorney fans are not happy seeing how their characters look.

What shouldn’t come as a surprise is how much I appreciate the English dub of Ace Attorney. While the main cast continues to do a great job with their roles, I was completely in awe of Ian Sinclair’s performance as Luke Atmey. The speed and clarity that Sinclair was able to pronounce all of those alliteration lines were remarkable. And Sinclair was able to ham up Atmey even more than he seemed to in the game. It was casting at its finest. Plus, I loved how Sam Riegel was cast as Tigre (the imposter Phoenix Wright), considering Riegel is Phoenix Wright’s voice in the video games—so having him on board as the Wright imposter is one of the greatest meta-decisions I can recall. But the strength of this anime is easily the English dub.

Not much was added as extras in this release by FUNimation. Fans are given an episode commentary (episode seven) as well as a textless opening and closing. At least the opening song is very catchy, so there’s that.

Sadly, my faith in a better adaptation for season two did not come true. Usually, I’d be hopeful for better changes in the second half of this release, but so far, nothing has been done to make me say there’s a chance here. Again, it’s cool as a fan of Ace Attorney to see popular characters animated and getting to talk in English, and I do think the cast and dub staff have done an impeccable job with this title. But the studio that animated it is where I put most of the blame on why I’m so disappointed. Be faithful, take the time you need to flesh things out, no anime-original turnabouts, etc. Considering this series was popular enough to get a second season, I think fans would’ve appreciated it taking the time to make this series shine, but who knows, maybe that’ll change in the second half. Maybe?

Pros: Anime was an easy watch to binge; does a decent job at providing content for knowledgeable fans of the franchise; a fantastic opening song; Ian Sinclair’s performance; a great English cast.

Cons: Animation quality wasn’t as crisp as I’d like; added filler arcs when there could have been canon content adapted; isn’t as faithful as I would have liked; would have given the canon turnabouts more time.

C.J Maffris is the Editor-in-Chief at Toonamifaithful.com. Feel free to follow C.J on Twitter @SeaJayMaffris, and check out his Toonami documentary titled “What Toonami Means To Me.”