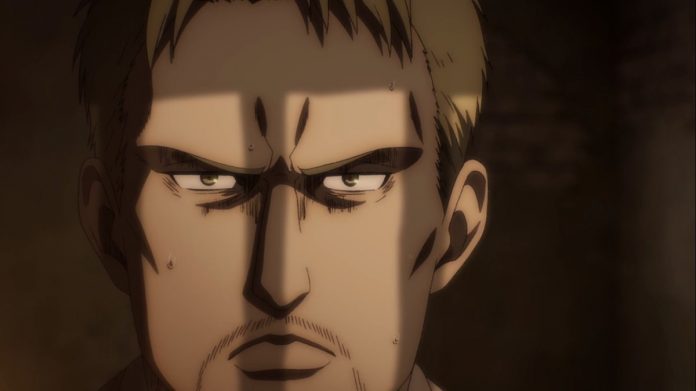 For those who enjoy backstory and learning what makes characters tick, episode three was just what the doctor ordered. Fans get more intimate with Reiner as we see the harsh reality for him as we find out more about his father (from Marley), explaining his absence from Reiner’s life. Since Marley and Eldians live separately, the soon-to-be Armored Titan, had to learn how to survive on his own quickly. Reiner uses this unfortunate fact as motivation to become a warrior candidate in hopes of him and his mother becoming honorary Marleyans. If selected, the three can live together, which was something Reiner strived to have happened. Now that fans figured out the reason behind Reiner’s motivation, it created sadness for me and something I’m sure others felt as well. I’ve carried his betrayal to Eren and Scout Regiment since season two with me a ton, and something I never got over (I would roll my eyes whenever he came across my screen). It was devastating not only for Eren but also for fans to see such a reliable ally, in-turn, be the root of all the struggles Paradis faced. And it’s something that Attack on Titan seems to hit on, by making characters compelling and showing that everyone has a story even if it’s someone you have grown to dislike. It would have been so easy to leave things as they were without us knowing why Reiner is doing all of this. But this added layer creates a whirlwind of emotions that shows the beauty of this series.

It didn’t stop there, as we later see that Reiner was one of seven candidates (Annie, Bertholdt, Pieck, Galliard, Marcel, and Zeke) training to become warriors (much like what we are currently seeing with Gabi, Colt, and Falco). But only six (during this flashback) would be selected to inherit a titan. Galliard bluntly told Reiner he lacks what it takes to become a warrior, and the best he could offer was his loyalty to Marley. Reiner at the time was not performing as well as the others, but his dedication to becoming a warrior pushed him through the intense training (which ultimately led to him becoming the Armored Titan). After this harsh exchange, Reiner proclaims to Bertholdt that he wanted to become a hero to save the world and make his parents proud. Not only does this reinvigorate Reiner’s drive, but this also shows Bertholdt’s role in their friendship as the one who keeps Reiner centered, which is probably why the loss of Bertholdt affected Reiner more than others might have thought. The two went through a ton, and losing him could have been the straw that broke the camel’s back.

Ironically, the loyalty to Marley was a determining factor in Reiner becoming the Armored Titan, which angered Porco, who was not chosen as a warrior, as the flashback continued to play out. During the parade to celebrate the chosen warriors, Reiner spotted his father going back into his shop, which resulted in Reiner running to visit his father to exclaim how happy he was that the three of them could be a family and honorary Marleyans. Sadly, his father didn’t share the same feeling and quickly accused Reiner’s mother of sending their son for revenge and planned to run away from the both of them. As if Reiner wasn’t already dealing with a ton of issues (wow). I began to empathize more with Reiner because of all the rigorous training to become Marleyan to connect with his father, only to be rejected. Despite this, Reiner was still determined to become a hero by saving the world from the people who live in Paradis.

Reiner, Annie, Bertholdt, and Marcel arrive in Paradis, and things take a devastating turn for the group. It’s here when Marcel confesses that he criticized his brother Parco for him not to be selected as a warrior and praises Reiner so he could become the Armored Titan. Reiner takes another “L,” knowing his father wants nothing to do with him, and he inherited the Armored Titan because Marco wished to protect his brother. Marcel pushes Reiner out of the way and is eaten by the titan (who we learn is Ymir in season two). Marcel seemed to do this out of guilt for telling Reiner the truth, and this sacrifice was his atonement. The three continue with the mission despite Annie’s thoughts (and kicks) of abandoning the mission and going home. Bringing fans full circle as they would see the events of Attack on Titan’s first ever episode when the Colossal Titan appears at Wall Maria. Reiner begins to give up while reminiscing about Eren’s difficulty maneuvering the ODM gear in this training, reminding him of his struggles of not being selected for his hard work. He tells Eren to keep moving forward but doesn’t take his own advice as he sits in a chair prepared to take his life. I was relieved Falco indirectly saved Reiner’s life by slamming his fist in frustration on the wall where Reiner was sitting and remembers that he will need to be there for everyone because they look up to him for his experience of being a titan.

The episode takes an interesting turn when a wounded soldier who Falco helped calls to him as he passes by. This soldier confesses that the reason he’s there is not because of emotional trauma but because he’s not ready to face his family and continues the conversation saying the war wouldn’t happen if people knew the mental and physical damage it caused. He points out people who do have a choice see things differently, which could be hope or a different set of unfortunate events, but the only way to know is to move forward. I’m looking forward to learning what Attack on Titan is trying to say when dealing with the moving forward mantra, especially when Reiner talked about it to Eren. This episode did a fantastic job humanizing a character that others (including myself) did not like because of his actions. Now I feel sorry for Reiner, knowing all of the obstacles he had to endure up to this point of the series, which displays the wonderful job Attack on Titan does with character building. I’ve written about characters in this series before (Commander Erwin), and it’s something that continues to shine with every new episode. I enjoy how this series reminds us that Eren, Mikasa, and Armin are not the only ones who endured challenges and focus on other heartbreaking stories like Commander Erwin and Reiner. An interesting theme I’m beginning to notice is how fathers are behind the motivation of Commander Erwin (proving his father was correct in his suspicion of the government), Eren (his father’s memories revealing the truth about the world outside of the walls), and now we learn about Reiner’s desire becoming a Marleyan like his father to be with him. It’s fascinating that this series uses the relationship between a child and father instead of their mothers to shape these complex characters, and makes one realize the importance of the father-child dynamic. After seeing all of the awful things Reiner has risen above, we can add him to the growing list of characters that have my interest in seeing what’s in store for them in the final season. I wonder if my empathy will continue as the season moves forward, but even so, the fact that I’m even at the point says something to me. And probably to others who are watching as well.