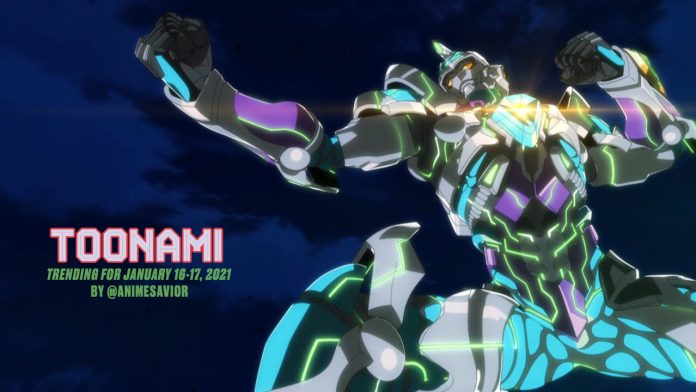 “Yuuta, you must complete your mission. This is only the beginning.”

The Toonami Trending Rundown for Jan. 16-17, 2021. After two years of fans waiting, Studio Trigger and Tsuburaya Productions’ SSSS.GRIDMAN would make its debut on the Saturday night lineup.

On Twitter, #Toonami would trend in the United States alongside Sword Art Online (SAO), Fire Force, Assassination Classroom, and SSSS.Gridman. We also saw a pair of character trends from both Attack on Titan and SAO. Attack on Titan’s buzz would lead to Zeke trending, as he formed a plan to resurrect the Founding Titan. Meanwhile, Sword Art Online had Kirito trend as he battled Gabriel, while Asuna escorted Alice to the End Mountains to get transferred to the real world.

This week, Toonami showcased a new animated music video for “Alive After Death” by John Carpenter. You can check it out below.

Aniplex released a new English dubbed trailer last week for the upcoming Demon Slayer film, Mugen Train. Aniplex USA and Funimation plan on debuting the film in theaters stateside subbed and dubbed in Early 2021. However, with theaters ordered closed or capacities drastically reduced due to COVID-19, fans are understandably wary on how Aniplex can safely pull off a safe premiere.

All aboard the #MugenTrain! 🚂 The Demon Slayer -Kimetsu no Yaiba- The Movie: Mugen Train English dub is arriving in theaters at the same time as the sub!

In an interview with SAO composer Yuki Kajiura (reported by YouTuber Gamerturk), A-1 Pictures have completed production on the upcoming film Sword Art Online Progressive: Aria of a Starless Night. Producers are aiming for a release in Japanese theaters this spring, but with the uncertainty of the pandemic, Aniplex has held off on announcing a premiere date.

Until next week, stay safe, be sure to visit blacklivesmatters.carrd.co to see what you can do to help the fight against social inequality, and continue to do your part to stop the spread of COVID-19 and protect others by following your local health advisories. Stay at home unless essential purposes require you to go out, practice social distancing by staying six feet/two meters away from one another if possible, and wash your hands thoroughly for at least 20 seconds.