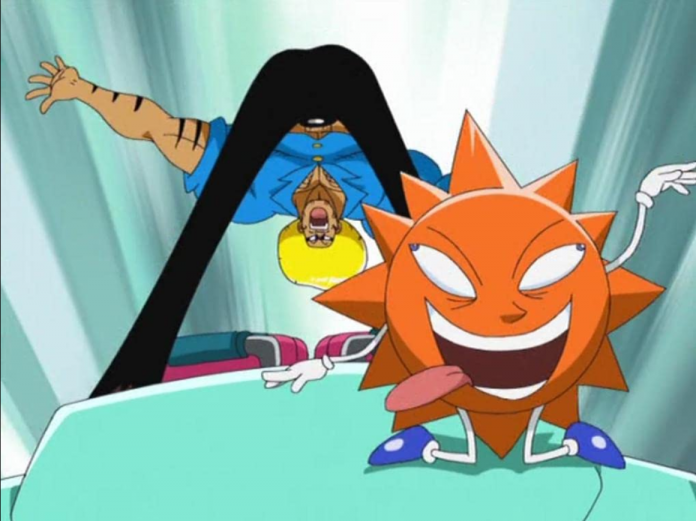 What’s the first gag anime scene that genuinely stuck to you? Mine is from within the first five minutes of Bobobo-bo Bo-bobo, where after saving the girl named Beauty, Bobobo’s nose hairs retreat into his nostrils as a man pulls down shutters and announces it’s time to wax and clean them. It was so absurd that when I first saw the scene, all I could do was guffaw and keep chuckling as I furrowed my brows in confusion. I was still coming to terms with the fact that there was a dystopian city-state ruled by bald people who would shave innocent townsfolk, and a buff man donning shades, and a yellow afro was controlling his literal nose hairs like whips to defend those masses. Sometimes, it takes a slight push to make a scene jump from absurd to funny, and this series has plenty of those moments. It’s like a right straight following a left jab–the basis of Japanese manzai comedy comes from rapid-fire call-and-response and turning one-off jokes into a string of punchlines. Bobobo was my introduction to this particular kind of Japanese humor that’s inherent in anime comedy. While I didn’t understand it entirely on first viewing, it had a rhythm that made it very easy to pick up on and laugh along. It also helped that there were some obvious references because it was a parody series.

Bobobo is a parody of Fist of the North Star–one of the most iconic Shonen Jump series of all time, famous for being extremely action-heavy and influenced by late 70s and 80s hits like Mad Max. The concept of taking this property heavily influenced by Western media and further distorting it with heavy Japanese humor seems pretty novel. To then have that kind of work even further distorted by localizing its English dub for Western audiences is even more fascinating! Recently, this series has been on my mind since the wonderful folks at Discotek Media have been able to bring this series back to the cultural zeitgeist in the form of home video. All the while, they also painstakingly went to the lengths of subtitling all of the background signs that appear in Japanese text. There’s so much going on at any given scene, with tons of background gags that could easily fly under the radar. The level of effort that went into this show impresses me, from the perspective of a consumer and as someone who appreciates the actual folks animating it and localizing it. From the opening scene, I noticed that the text sign named the bad guys “マルガリータ帝国,” or “Margarita Empire,” but the dub called them the “Chrome Dome Empire.” After doing some sleuthing, I learned that in the original manga, it was actually written as “マルハーゲ帝国,” or “Completely Bald Empire!” This level of localization for the English translation shows a level of finesse and confidence that truly scratches that proverbial itch!

Being older now, I can completely appreciate this show from a more adult point of view as a fellow creator, but that is not to say that it doesn’t still entertain me like the kid inside ever left. Part of the appeal of this show is the colorful cast of characters, and I would be loath to forget the veritable tons of lowbrow humor that also comes with all their interactions. It will never be lost on me how there’s a character named Gasser–localized from Heppokomaru, which is originally a double pun on “useless/quack” but also has the onomatopoeia for “fart”–AND his power is named “Fist of the Backwind.” The layers in the humor are as rich as the opulent yellow flatulence our shy sidekick exudes in the show. I’m also a huge fan of Jelly Jiggler, the gelatinous giant reminiscent of Gumby, and Softon, a coolheaded and serious character whose head is literal soft-serve ice cream. Jiggler’s Japanese name is actually Tokoro Tennosuke, based off of ところ天, a type of agar jelly. Meanwhile Softon is just Softon in katakana. It’s genius character design! The subtlety of brick and mortar! I believe that all humor is rooted in a sense of familiarity and relatability, and even when the content itself ventures into the weird and absurd, being able to recognize the roots of that absurdity is what can lend humor to that sense of disparity between what you see and what you expect. Farts are smelly and gross, but mostly harmless–seeing that weaponized as a martial art, though? Totally unexpected, but can easily be funny because of that!

These days, shows that find themselves airing on Toonami are very diverse in the nature of their storytelling, from episodic series to long-running narratives. However, most of them skew towards serious or consequential tales with messages or themes that have merit in being dissected. Having a hard gag comedy series was a ridiculous change of pace that I think cemented Toonami’s position as a programming block willing to air content that rides against the grain of expectations. Back in the day,  many people wanted to tout anime as a serious, adult, and mature brand of media that can stand as high art. The fact of the matter is, yes, that’s true, but it’s not indicative of the whole experience. There are children’s cartoons, both anime and Western, that I would put on the same level of “art” or cultural importance as a film like Blade Runner. There are also films that air in theaters that are lowbrow and crude. Heck, even now, there are adult-marketed cartoons branded with humor, like Rick and Morty. Times have been changing for a while now, and animation as a medium can still be respected even if it’s not an arthouse showstopper like Cowboy Bebop. Choosing to air Bobobo was more than likely not that deep of a decision on Toonami showrunners. But it proved to me, as an adolescent coming to terms with the fact that not everyone liked the same things as I did, that it didn’t matter as long as you had fun with what you enjoyed! I had a single friend at school who knew what Bobobo was, and he didn’t understand a lick of plot, just like me, but still would slap his knees with me while recalling all the absurd gags that happened that week.

Nowadays, Bobobo still has relevance. It gets events, such as CyGames’ Granblue Fantasy April Fool’s Event, and last year’s revival of its Death Note collaboration, proving it has plenty of fans nearly 20 years after its first chapters were serialized. I wouldn’t say that we’re in a Bobobo renaissance. Still, it’s always heartwarming seeing a property you grow up with being regarded fondly, even without things like reboots keeping it afloat. The uniqueness of the character designs likely helped a lot with keeping their images memorable over time, but as with any gag series, it’s the strength of the characters that keeps the audience coming for more. Characters like Don Patch, Jelly Jiggler, and Bobobo himself have incredibly unique and recognizable designs, and aren’t above switching roles constantly between “funny man” and “straight man.” That kind of flexibility is invaluable and crucial towards pulling stunts like making an offhand gag comment into plot foreshadowing or a running gag–like the Mean Green Soup Aliens mentioned in episode five directly leading to Gasser joining the party. Writing doesn’t get any more consistently madcap than this! Let us know–do you love any gag anime out there for their writing? Have any general favorite gag anime characters or a skit from a gag you just love to rewatch? Feel free to comment or reply!