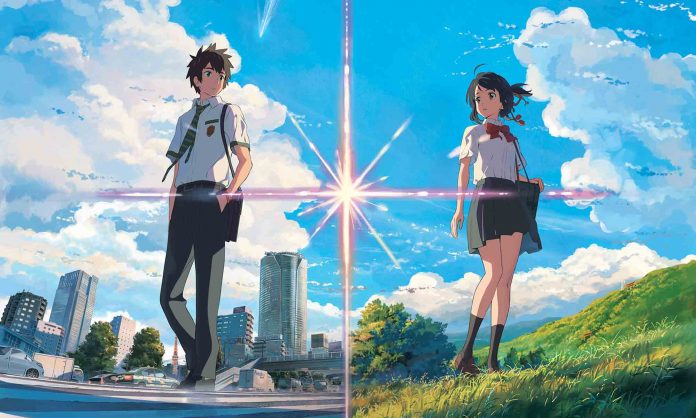 This isn’t a Hayao Miyazaki film, but it sure feels like one.

After figuring out the menu controls for the Blu-Ray, I ended up watching the English dub. Like Godzilla: Monster Planet, it’s excellent. And I was able to take in a lot more of the Studio Ghibli-esque attention to detail. The environments—from the bustling metropolis of Tokyo to the idyllic Japanese countryside, this film’s like an animated amalgam of Freaky Friday and The Lake House. It also reminded me—plot-wise, anyway—of a videogame I recently played, called Life Is Strange, where a similar supernatural occurrence takes place that starts screwing with the space-time continuum, and you play as the only one able to right the situation.

Suffice it to say, the synopsis had me hooked before I even saw any footage. Just too bad I wasn’t able to see it in theatres…

A good amount of Japanese folk-tales and legends play into the story. The whole thing revolves around twilight—not quite night, though not anymore day—where the fabric of reality thins, if only momentarily. It’s an interesting concept—one us knuckle-headed Westerners have never tried to tackle in our ‘splosion-fueled blockbusters. I quite enjoyed it, though.

The song “Don’t Stop Believin’” by Journey couldn’t help but pop into my head, following the gorgeous opening montage—just the opening lines, anyway. Our protagonists, Mitsuha (voiced in English by Stephanie Sheh; Bleach, Naruto) and Taki (Michal Sinterniklaas—cool name), fit those parameters perfectly, and I wouldn’t be surprised if the filmmakers were inspired by the first verse of that song. Mitsuha…ugh. Love her. Whereas I could relate more to Taki, being a male, Mitsuha is the first we’re introduced to, and, so, naturally, my inner writer took over, and she became the one I found myself most attached to. Following some rather strange turns of events, Taki is the one whose perspective we see most of the rest of the story from. I can relate to him; finding out what he does about their entanglement, he has a hard time letting go. I respect that—his perseverance to do something about it, instead of just accepting fate. They’re both great characters, in their own rights, and the use of montages on the storytelling front catches us up without being too hand-holdy, as the two get used to their…quite singular predicament.

A lot of the humor lands—none of it’s really regional (…ramen!). The music is great; originally recorded in Japanese by Radwimps, I prefer the English version (as I can, then, sing along). Very catchy soundtrack… As lines become blurred between the two characters’ realities, we’re treated to some spectacular tension, to the point where I began shouting at the television. It’s not tiresome, though—quite the opposite.

Boasting themes of love, loss, the complexity of time, and choosing one’s own destiny, Your Name is a beautiful film. It both breaks and respects the boundaries of theoretical physics, but in a way that’s far from confusing. No outside research needed, folks; the rules of the movie are self-contained (and explained). We’re left, finally, wondering at the end, to decide whether or not everything works out the way the characters—and we—want them to. Although it’s open-ended…I’m hopeful. I enjoyed my time with these characters too much to sign off on pessimism.

This is a personal story as much as it’s a universal one.