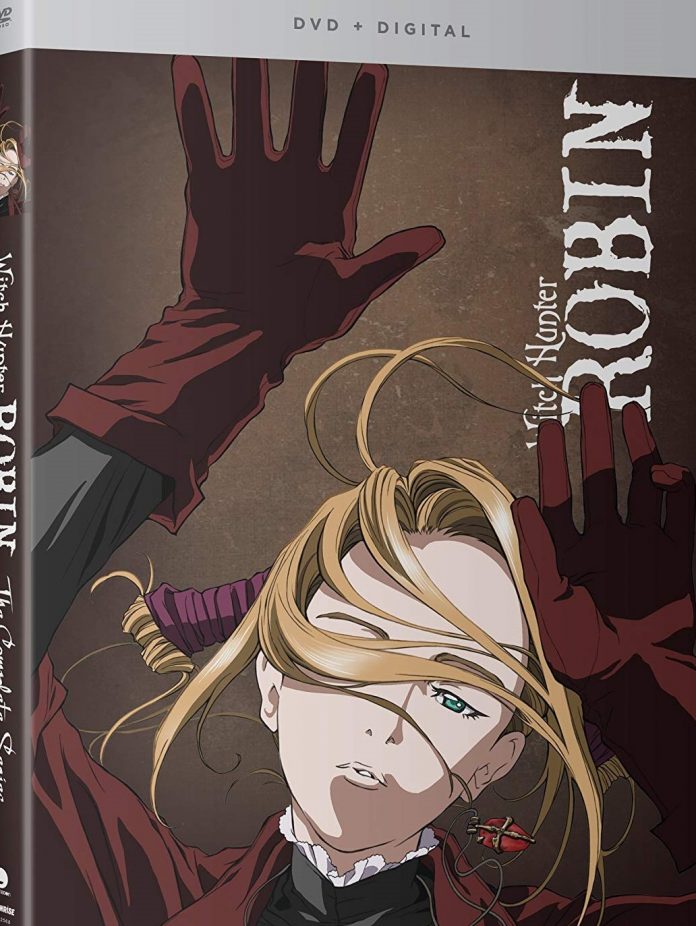 I didn’t know what to expect when I decided to review Witch Hunter Robin. I’ve never seen the series before and didn’t know anything about its history. From what I gathered, it seemed to be a fairly popular title. I’m sure many older fans were excited to hear FUNimation was giving it a home media release. Surprisingly, I’m split on how Witch Hunter Robin entertained me as a fan, since it had elements from cop drama shows that I love. But it added in supernatural stuff that fell flat with me. I wouldn’t call this series terrible, by any means. Overall I’d say I’d enjoy it. But I don’t think this recent release will create any resurgence for the franchise. And I think it’d be a hard sell for newer fans to check out.

they should go ahead and upscale witch hunter robin, i bet it looks great in 1080p!! pic.twitter.com/VM8lDQgMLx

The story of Witch Hunter Robin follows 15-year-old Robin as she is assigned to a secret task force called SOLOMON, or STN-J for short. Her main objective is to look for secrets of witchcraft under the guise of joining the STN-J. This task force is responsible for hunting down witches who, for the most part, use witchcraft in nefarious ways, such as murdering people. SOLOMON is tasked with keeping records of witches, as well as those who might either become or give birth to witches. Robin joins the team as a craft user, who seems to be powerful in her own right. Her team, led by an aloof man named Amon, get different cases where their main objective is to capture witches alive instead of disposing of them. This is something that Robin isn’t familiar with, due to her background of hunting witches in Europe. However, as the STN-J continues to capture witches, the higher-ups from SOLOMON seem to become more fearful of Robin as her powers grow stronger. Also, the Administrator of the Japan branch has been developing a new way for humans to capture and eliminate witches through a drug called Orbo. Soon Robin is labeled as a witch and is hunted by the very foundation (SOLOMON) that she joined. Robin, fearful for her life, begins to uncover the secrets she was initially assigned to uncover in order to stop a terrible plot to take down all witches in the area.

What surprised me most was how Witch Hunter Robin resembled a cop drama series. During the first 12 episodes, the STN-J would get separate cases involving a witch and what the group had to do. Usually, there would be a murder victim, and it would be up to the group to find and catch the witch who committed the crime. Some times the STN-J would have to stake out places and figure out where criminal witches were entering into the country. It was a formula that would repeat and one that I found enjoyable — the procedures held my interest. Just like with CSI or NCIS, these types of “baddie of the week” can help set the stage and allow viewers to become attached to the characters and enjoy how they work. So I found the beginning fun to watch because it has an element that I think might appeal to those who enjoy cop dramas instead of anime.

But with how formulaic the series became, the harder it holds interest for those who want more than just cops figuring out a mystery. Witch Hunter Robin has a lot of that, and while I don’t mind, I can see how some might find it annoying. It’s a slow burn, and we rarely get a feel for the crew we follow. Besides learning about Micheal’s backstory, I didn’t feel as if we got to know our main characters. Bits and pieces of Robin’s past would come up, but I did not feel a connection with many of the other characters. We got to see more character development from the bartender of the STN-J’s favorite watering hole than we did from central figures like Amon or Dojima (at least at the start).

Sadly, it was when the supernatural witch battles occurred where the appeal of the series waned. I didn’t need witch vs. witch battles to keep me engaged in the series (which I’ll admit probably puts me in the minority). As seasoned as I am with anime, these types of fights are a dime a dozen and didn’t do anything to make me feel more attached. There were moments toward the end where we see Robin become stronger and more capable with her fire, so that was rewarding to see. It was especially funny how she finally started to use glasses to get more control of her flames. And yes, the fire animation looked spectacular in many of the battles involving Robin. But as someone who wants more realistic cop drama anime, the added witch element took away some enjoyment. Witch Hunter Robin became a mixture of both CSI and Supernatural, and I could live without the Supernatural part. It wasn’t bad or made the series unwatchable by any stretch. It wasn’t as if I don’t like supernatural elements in a series. I’d venture to say that adding that to Witch Hunter Robin made this series more memorable. It was a simple hook that can attract those outside the anime fandom. I’m different because I happen to enjoy the more procedural types of cop drama series. Witch Hunter Robin teased it for half of the series, with a witch battle at the end.

Oddly enough, that would put me in the same boat as the Administrator of the STN-J Takuma Zaizen (which had me laughing). He created this new drug (Orbo) to have humans hunt witches instead of the witches themselves. Zaizen wanted to eliminate witches from regular society and was aggressively trying to get SOLOMON fully on board. So while he was working with witches every day, he was ready to transform the STN-J to where humans were in control and didn’t need witches anymore. This ideology created excellent drama between Robin and the supposed allied organization. It was a nice touch to create more tension in the series, as Robin soon started to suspect Amon and others were out to get her. This type of pressure was lacking during the first half. I did find it fun to watch the STN-J takedown homicidal witches. But instead of only having that in the series, we get a delicious cat and mouse game between Robin and the STN-J. Such as with cop dramas, there needs to be a plotline that takes multiple episodes to tell a more dramatic story that connects us to the characters.

On the negative side, the character art was not to my liking. I typically enjoy watching older anime series, as I find something aesthetically pleasing with the artwork. However, most, if not all, of the characters looked odd or off-putting to me. Besides Dojima, everyone’s foreheads seemed too long, giving me flashbacks to Code Lyoko (I like the show, but the forehead thing was distracting). Plus, the hairstyle Robin fancied in the series was bizarre. I’m surprised it didn’t catch more people’s attention because of how weird it was. And the character design for the chief inspector of the STN-J (Shintarō Kosaka) was rather unfortunate to see for someone with my background.

A huge asset for Witch Hunter Robin was the star-studded cast. Anime fans will get to hear veteran stars like Kari Walgreen (Robin) and Crispin Freeman (Amon), both who did excellent jobs in their roles. I couldn’t get enough of either, and the fact that they were cast as the two main characters was a delightful surprise. The rest of the STN-J were comprised of other big names such as Johnny Yong Bosch (Haruto Sakaki), Michelle Ruff (Yurika Dojima), Dave Wittenberg (Michael Lee), and Wendee Lee (Miho Karasuma), all who did a wonderful job. There were even some notable one-off roles for iconic voices, such as Steve Blum (Akio Kurosawa) and Beau Billingslea (Willem Hasselbyke). However, I found the performance of Lex Lang to be the most noticeable and impressive. Lang had the honor to play Shunji Nagira, who was a fantastic character to follow in the second half of the series. I enjoyed Amon’s brother (Shunji) working with Robin to help keep her safe and figure out what’s going on with the STN-J as well as the witch community. He was the kind of detective that I’m used to seeing in film noir, and seeing it in this anime put a massive smile on my face.

The release itself wasn’t anything out of the ordinary. FUNimation released all 26 episodes on four DVDs (no Blu-rays). So the case that the series came in is a little larger than that of Blu-ray cases. Nothing extra was added besides trailers of the series, give it a bare-bones treatment.

I now know what an anime series would look like if we combined CSI with Supernatural. Not sure I’d want that for myself, but I see the appeal of Witch Hunter Robin. Fans are given a solid cop drama series that added elements of witchcraft that can bring two sides together. The start is slow, and we don’t get to know the characters as well as I would want. But I found something appealing with the STN-J getting a new case and finding witches after they committed a crime. And while it wasn’t the prettiest series, there was a certain charm that I imagine captured anime fans when it debuted. Still, I don’t think I’ll be seeing much fanfare about its recent release and suspect it will inevitably fall into a void of underappreciated anime.

Cons: The witch angle felt played out and didn’t hold my interest; didn’t connect with many of the characters; odd character art; bare-bones release.