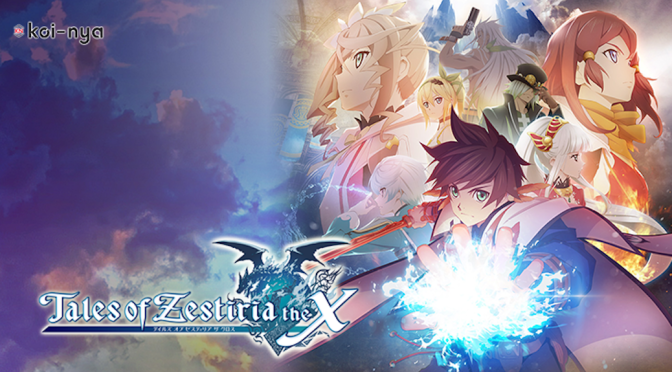 I know little about the Tales franchise. I never played them, and only knew about Tales of Symphonia. I had nothing against the franchise, but it never resonated enough for me to invest time. There were other series to watch, video games to play, and school work to complete. I came across Tales of Zestiria the X with an open mind, knowing that I didn’t need expansive Tales knowledge to enjoy it. And learning that Ufotable did the animation had me excited to dive into this series. Ultimately I felt rewarded watching Tales of Zestiria the X because of the animation and great storytelling, which put a huge smile on my face.

In Tales of Zestiria the X, Seraphim have powers & attitude! Find out which one you would be in our quiz! https://t.co/xlcImZooTf pic.twitter.com/AL7gh6hoGb

We enter a world where two beings, humans and Seraphim, live in harmony. Humans pray to the Seraphim to help keep balance in the world. Sadly, after thousands of years, humans began to ignore the Seraphim, disrupting their relationship. With that, an evil force known as malevolence started to spread because of the disconnection between the two. This caused the world to enter an age of chaos where everything is surrounded by darkness. There is a legend in this world where a human becomes the Shepard who can use the power of the Seraphim to help stop malevolence from spreading. Enter Sorey, a human who can see and speak with the Seraphim. He minds his own business when the princess of Highland, Alesia, stumbles upon ancient ruins that he was exploring. After helping her, he decides to go to Alisha’s home country to watch a ceremony to see if anyone can become the new Shepard. During the ceremony, the princess is attacked by both a group of assassins and a creature created by malevolence. Sorey decides to perform the ceremony and become the world’s next Shepard to help protect the planet. After the battle, Sorey travels across the world to save and protect both humans and Seraphim from disaster.

The animation in this series is one of its best aspects. I’m a massive fan of Ufotable animation, thanks in large part to how they animated Fate/Zero and Fate/Stay Night Unlimited Blade Works. They excel with action sequences, and that continues with Tales of Zestiria the X. The fight choreography left me in awe and became my favorite parts to watch. They never failed to get me excited about the next battle. The artwork and colors throughout (when Sorey would sync up with a Seraphim) were breathtaking. It’s hard to pick a specific battle that emphasizes how beautiful they were. But Ufotable does an amazing job with camera angles as well as speeding up and slowing down during fights. For those who enjoy anime action, Tales of Zestiria the X has what you are looking for.

I enjoyed the story that Tales of Zestiria the X told. It was fun to watch Sorey become the Shepard and use the Seraphim to stop evil. The characters were all endearing, and easy to care about. The series does everything to give fans that genuine Tales feel. The episode preview mimics how interactions look in the game. I loved it and it was smart to make something that people typically skip into something that fans want to watch.

I give credit to the writing and character development in Tales of Zestiria the X. Most notably with two other humans (Alisha and Rose) who join Sorey in his travels. In season one and a bit in season two, we watch Alisha grow to be one of the most capable royal characters I’ve ever seen. She is an idealist who wants to keep everyone happy and alive despite the turmoil that plagues the world. She will not kill any wrongdoers, risking her life in the process. Her resolve not to kill even when her own people attack her (verbally and physically) made her look every bit the leader you want to follow. She might be viewed as naive to some, but she was able to back up her views with action. She made me believe that her ideals were attainable. She was able to help Sorey fight off hellions as his squire to alleviate the enormous burden on his shoulders.

The same could be said for Rose, who goes through a dramatic arc herself, realizing that her methods of justice don’t help as much as she thought. Rose coped with the atrocities in her world by murdering people she deemed vile. She lost her mentor after her fiance betrayed him (by killing him and nearly killing Rose). So she began to murder to help anyone who finds themselves in a similar situation. Sorey eventually finds out and shows her that her actions aren’t helping and create more malevolence that Sorey has to clean up. It leads to a fantastic back and forth, as Rose mentions her fear that all of her efforts are a waste of time. Listening to her express her doubts are a powerful moment in the anime. Many of us wonder if what we are doing is meaningful. And her scream of anguish was all too real. You don’t get these kinds of developments in anime very often, and it gave her character a lot of pathos. It makes you want to hug Rose and tell her things will be all right.

This series, containing 25 episodes, seemed rushed toward the end. I recall an interview with Robbie Daymond at Anime Boston 2017 where he mentioned how there were only two episodes left to record and wasn’t sure how the story would finish (in being faithful to the games). While I was fine with the conclusion, I see his point and am sure that those who have played the game will feel a bit disappointed. The way the story progressed during the final arc was not as clear and concise as the earlier episodes. It didn’t make much sense to me why Zaveid joined Sorey (for one example). He shows up to help Alisha and then decides to the join the group’s efforts to take down the Lord of Calamity (the final boss). We don’t get to see how he develops his deep connection to Sorey and decides to help him.

The last three or four episodes moved at a pace where things didn’t have time to settle in. Dezel’s death didn’t have the impact that I thought it would, and I think it was because the anime moved forward too quickly. It seemed quick and his aura kept showing up, leaving me conflicted about how I felt when the character “died”. I wish that there were more seasons and episodes to tell the story more gracefully, because it needed just a bit more to give a more satisfying feeling. It would have allowed the more emotional moments to create more impact. The moments before and after Dezel’s death could have been given more weight, but since the story needed to finish I didn’t get a chance to soak in the fact that Dezel had died. Rose did what she could to ease the pain of losing him, but I wouldn’t have minded a little more emotion to come out from his death.

There was a bit of a disconnect with a choice that Tales of Zestiria the X made back in season one. Earlier in the series, two episodes focused on another Tales game (Tales of Berseria). It didn’t make much sense going into a new story where Tales of Zestiria the X leaves off. We were going to see Sorey and his gang help fight hellions to save innocent civilians. But instead of seeing the conclusion sooner, we get to see a new character, Velvet Crowe, escape from prison. At first, I thought that the two events were going on at the same time. However, in the second season, it is revealed that the events that take place in Tales of Berseria happen well before Tales of Zestiria the X. It was the actions of Artorius and Velvet Crowe that plunged the world of Tales of Zestiria the X into chaos. I’m typically a fan of this kind of storytelling. But with the limited number of episodes, I’d rather hear the backstory as explained in episode 18 (and a later episode toward the end), instead of getting two episodes that shorten the content. Especially since it was placed in an odd spot. If the latest story arc was concluded, I wouldn’t have minded as much.

Fans of the game should be pleased to know that the video game cast was the same in the anime. That isn’t always the case, and many fans of video games get nervous when it comes to dubbing the anime. I like the decision to keep the voices consistent because these actors have already portrayed these characters. They had time to work out any kinks and understand how the characters tick. Plus, during its simulcast run, Daymond wasn’t able to record for a few episodes (due to an illness) and FUNimation had to have an understudy pick up where Daymond could not (Philip Lamont also missed an episode during the simulcast run). But for the home media release, the actors returned to record the lines that they missed. I was impressed with the performances of the entire cast. I felt the emotions that the characters were conveying. Chris Niosi (Dezel), Caitlin Glass (Rose), and Alexis Tipton (Alisha) stood out the most. The raw emotions of each character were portrayed to perfection by each.

Featuring the main cast returned from the original game (myself included) own Tales of Zestiria the X Season 1 soon! https://t.co/vFeUqft9em

FUNimation gave a ton of extras in the two-part release for Tales of Zestiria the X. Part One even got a limited edition release, and it looks gorgeous. The way the box looks and feels will please collectors, as well as the artwork. It came with art cards, which aren’t always a fan favorite, but I liked them. Part Two didn’t get a limited edition release, which surprised me. Still, FUNimation had a total of three episode commentaries and one video commentary. Also included was a subbed 44-minute video about the Shepard. There were unaired previews, commercials, and textless openings and closings, adding loads of content for fans of the series.

Tales of Zestiria the X hit the mark on a lot of things. The story was great, the acting was superb, and the animation was beautiful. I wouldn’t mind if the series had been longer to give the ending a better feeling, and I wouldn’t have added two episodes of Tales of Berasia at the beginning of the series. I would have placed those episodes after episode 18, when more of that story is explained (if at all). Those who have played the game will feel satisfied that the voices stay the same and that episode previews mimic conversation moments in the game. The limited edition box for part one looks amazing and any fan should want to pick it up. I was pleased, and it makes me want to play the game to get the whole story of Tales of Zestiria.  I have a feeling it will do the same for others.

Catching up to Tales of Zestiria the X. I don't understand how an adaptation is allowed to be THIS much better than the source material.

Cons: Ending felt rushed; wasn’t a huge fan of having Tales of Berseria story being added where it was.