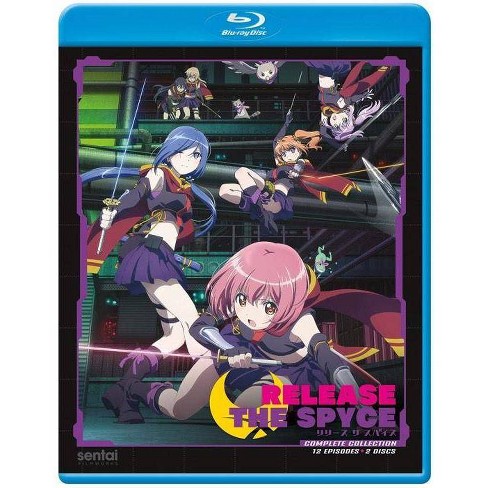 Sometimes, an anime series can create a wild premise that will grab your attention from the get-go. In Release the Spyce, we have a secret spy organization that recruits high school girls, whose abilities are enhanced when spice is consumed. Immediately I chuckled, thinking how silly that is and was expecting another series where cute girls were doing cute things. Yet after just one episode, I could tell this series was only beginning to spice things up and creating a fun show to enjoy. Release the Spyce destroyed my expectations and left me to wonder, why didn’t I hear about this project sooner?

The series starts in a town known as Soraski. It’s here where high school girl Momo Minamoto lives her life as she wants to grow up to be a police officer like her late father. Gifted with a fantastic sense of smell and taste, she looks for a police officer friend of hers. She ends up getting roped into a dangerous situation when a group called Moryo (which has cast a dark cloud over this city for a long time) attacks Momo’s friend. Thankfully, a group of high school girls who are part of the spy organization, Tsukikage, rescue both Momo and her friend from the criminals. Tsukikage then recruits Momo and teaches her the ropes of crime-fighting to help keep the city of Soraski safe. Momo puts her heart into everything and begins training to be as amazing as her mentor Yuki Hanzōmon, and is driven to be the best spy she can be. With the help of eating spices, her body becomes a terrifying weapon, which is the ace in the hole for the gang. While there are some bumps along the way, Momo establishes herself as an excellent spy and a welcomed recruit to the organization. It’s here where we begin to find out just how dangerous Moryo is and what it’ll take for Tsukikage to end their dastardly plans. Momo and the rest of the spies continue to take cases to thwart Moryo’s advancement and to help keep the city safe. But it’s a lot bleaker than viewers were led to believe.

I was much impressed at the level of action this series had, as well as how brutal it became. At first glance, you think that this is yet another anime where cute girls become strong thanks to eating spices (which again was such a weird concept, but I loved it). And you do get a lot of the cute elements you’d expect from a series like this (juniors wanting attention from the seniors, schoolgirl antics, and stylish uniforms). Yet some bloody moments would make any shōnen fan cheer in excitement. While there were some earlier hints that this series would be a bit darker than it appeared, episode nine was where things picked up dramatically. We watch as Hanzōmon remembers the undoing of her mentor as she was brutally murdered and how Hanzōmon has her eye cut by the ringleader of Moryo, Kurara Tendō. And it continues from there, giving me a drama that blew me away. Release the Spyce lulled me into a false sense of security and then ripped my illusions from the seams, giving fans a wild ride, which I find rewarding in anime. I thought this series did a great job of building the anticipation before the final fight with Tsukikage and Moryo. It wasn’t anticlimatic, and the tone of the story became a massive strength for the series.

The fight choreography was above the standards I was expecting for Release the Spyce. Seeing the fantastic swordplay and hand to hand combat gave me a feeling that I was watching a series that was on Toonami. I was much impressed by getting to see characters like Momo, Hanzōmon, Mei Yachiyo, and Fū Sagami show how capable they are (especially when Fū and Mei team up to take down an adversary). But the biggest highlight for me was watching meek Goe Ishikawa lose control of herself and go on a fighting spree. Her movements, as well as the added song, made the moment even more memorable. She was terrific, and the action was a spectacle to behold. Release the Spyce did not hold back, both on the fights as well as the damage our leading ladies would suffer in battle. I couldn’t believe what I was watching, and helps create a solid foundation for viewers.

The story itself is relatively straightforward. Sure, Release the Spyce had some tricks up their sleeve, like Mei revealing to be a double agent. But that’s expected when we follow a group of spies. Of course, secrets are spilled, and people switch sides (thankfully, Mei does switch back to Tsukikage in the end). However, the story was a little too bland and easy to follow for my liking. While there’s an underlying story arc to hold everything together, the series felt too episodic, at least until episode nine. Before that, the girls would be on a case to help stop Moryo from becoming an even worse problem. Stop drug smuggling, finding out who created a brain control mist, etc. It was too neatly presented, as I thought a more convoluted story would’ve made the series even more robust. And while episode nine and on kept things on a straight path storytelling wise, it was the added depths of deception and brutality that made the show much more enjoyable. Before then, there were some beautiful action scenes and funny moments. But nothing of substance to sink your teeth in. It stays fun, but Release the Spyce deserves a lot more notoriety than being merely a fun series.

And the aspect that truly blew me away was the diverse soundtrack for Release the Spyce. Right off the gate during some early fights, I was hearing a dubstep track, which had me dancing in my seat. I couldn’t believe it, and while it may seem out of place with anime, I love it. I cannot get enough of dubstep music in action anime and would like to see more of it. And while not every track was dubstep, the music was still compelling and hit the right tone during fights to make the series pop. It was well executed with the choices on how the series should sound, becoming a massive win in my book. Even the opening song was one so catchy that I couldn’t skip, not even once.

I found the characters we followed to be just as interesting as one would expect. Tsukikage has quite the dynamic group, and having a mentor and student pairs was a nice touch, albeit a bit played out. I wasn’t thrilled hearing the juniors calling their seniors “mentor,” but I think that says something more about myself than the series. But getting to see how the young girls live their lives, and their “ideology” of how they act as spies was an excellent touch overall (especially Mei’s).

Sentai Filmworks provided the English dub for the series, and I was impressed by nearly everyone who’s voice was in Release the Spyce. What I liked was how the cast had a mix of actresses I’m familiar with and ones I’m not. It created a beautiful blend, and I loved hearing how everyone sounded. The leading ladies Momo and Hanzōmon were voiced by stars Juliet Simmons and Kira Vincent-Davis, both of who are staples in the voice acting community. Both were fabulous in their performances and sounded very much like a mentor/teacher duo. Yet, the most significant nod I’d give is a tie between Cat Thomas (Mei Yachiyo) and Joanne Bonasso (Kurara Tendō). I loved the youthfulness Thomas brought to Yachiyo and could sense a tremendous free spirit type of performance. Thomas’s voice embodied what I’d want Mei to sound like considering how she blows like the wind in life. And Bonasso gave such vast range for Tendō, making her a great villain to see throughout Release the Spyce.

I was not expecting to enjoy Release the Spyce as much as I did. It has a lot of elements, and the series brings them all in perfectly. The action, the drama, and music all are top-tier, and I cannot stress that enough. Sure the characters are typical with their tropes and cliches, but I’m hopeful that many readers who were on the fence about this series will now give it a shot. It’s a modern-day Power Puff Girls anime, where a little sugar and spyce made this series shine bright!

Pros: More brutal action than I was anticipating; amazing fight scenes; diverse OST that was a treat to hear; story had a few elements that I greatly enjoyed; performances by Cat Thomas and Joanne Bonasso were tremendous standouts.

Cons: Wish the story did a better job at muddying the waters between who was good and who wasn’t.