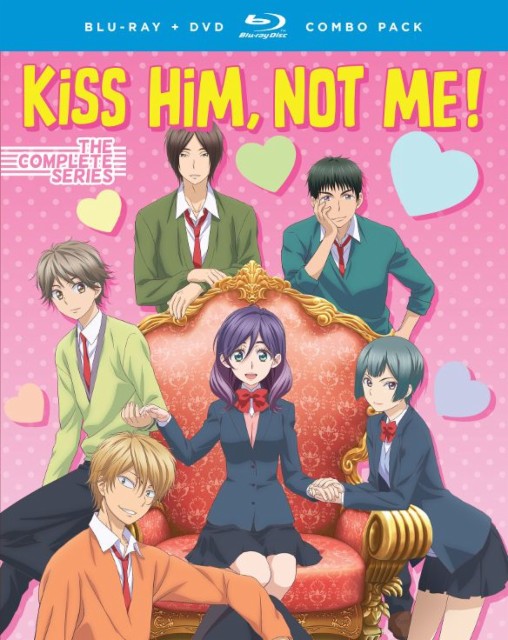 As crazy as this might sound, I believe it’s tough to impress viewers with the harem/reverse harem type of anime. There are fewer things you can fall back on to keep viewers interested. Sure, drawing attractive looking characters can pique interest, but you also need to have substance. And, if you screw up how you handle the deeper and more interesting themes that pop up, it might become difficult to earn the audience’s good graces. I think that’s the problem I had when watching Kiss Him, Not Me! While the characters looked great, that’s about as far as it goes for many of them. And it’s discouraging, because there were a few added variables that made me think it might have been different and something many fans would like.

#News Kiss Him, Not Me #Manga Gets Special Side Story Chapter in June https://t.co/ZyN4TPjzVW

So what is the show Kiss Him, Not Me! all about? Our main heroine Kae Serinuma is a huge otaku, and her favorite genre happens to be the fujoshi genre (AKA boy love). She would prefer to watch two princes get together from the sidelines and seems to have this fantasy with any two males she happens to see (which includes her classmates). She also starts off as an overweight young woman, who many view as a nuisance or undesirable. After her favorite anime character dies, she closes herself off from the world for a week. After that, she looks in the mirror and realizes she lost a ton of weight and had become a girl that every boy is interested in. Now the boys who wouldn’t give her a moment have a massive crush on her. How will Serinuma deal with all these pretty boys going after her heart? And will she be able to get the boy love scenario that she craves?

Kiss Him, Not Me! contains a ton of cliches and typical reverse harem hijinks that many anime fans have come accustomed to. You get the usual walking in on Serinuma, accidental touching, as well as all kinds of misunderstandings. But what sets it apart from other reverse harems is how Serinuma is such a crazed fanatic about not only anime but also boys love. So whenever the boys got close in potentially indecent ways, Serinuma would go berserk. It was comical at times, and it isn’t something I’m used to when watching a series like this. But the fact that she is a huge anime fan made her more relatable to me. There were a few funny moments when other anime series were mentioned, like Attack on Titan, JoJo’s Bizarre Adventures, and Yu-Gi-Oh. I enjoyed those aspects, which allowed Serinuma to be who she is, which wasn’t something I was prepared for. We all know the social stigma of being an anime fan. While that has decreased dramatically over the past few years, it still isn’t the most comfortable thing to talk about with new people. After the first episode, Serinuma was allowed to showcase her love for anime and boys love with her potential dates. They all accepted her interests (to a point), and even Asuma Mutsumi commented on how much her face sparkled when she got to talk about her passions instead of hiding them. It’s a lesson I think we can all learn, to try to show more of ourselves, and it’s surprising in this series, considering there were a lot of other topics in which Kiss Him, Not Me! fell flat (which I’ll get to later).

What is easily the worst part about this series is how terrible the potential dates are. We see four boys and one girl, and many of them display awful qualities throughout the series. Both Nozomu Nanashima and Hayato Shinomiya were terrible to Serinuma when she was overweight. But once she became skinny, they couldn’t get enough of her. Which is shallow, and should’ve made it easy for Serinuma to tell them to go away and not bother her again. Yusuke Igarashi started off that way, like both Nanashima and Shinomiya, but he was able to score points when Serinuma gained her weight back. He ended up seeing how great Serinuma is inside and out, and at least proved to be a suitable partner. Honestly, when it came down to it, the two best partners for Serinuma was either Shima Nishina or Mutsumi. I’ll throw Igarashi as a solid third choice, but those characters were the only ones who deserved Serinuma’s attention.

And you could see that throughout the series. Each suitor would get an episode centric to them, as well as new threats to Serinuma’s affection popping up every now and again. It was boring more than anything. There were some moments when the series would try to be different, with adventures at an anime convention, hallucinating that they were fighting ghosts, going on group dates, the whole nine yards. But it became difficult to differentiate this series from others. I will give Kiss Him, Not Me! credit for the final three episodes being interesting (although that usually happens with series like this). But it was nice to see Mutsumi grow and become more assertive in his interests. Plus his brother made a terrific antagonist with how smooth he was in nearly every situation. If the jokes were more consistent than maybe I’d feel different, but with how terribly this series handled some other subjects, it was impossible to enjoy this series thoroughly.

One thing that I do really enjoy with harem series or non-action shows is how they address important subjects and how they handle them. And there were a few that popped up that left a bad taste in my mouth. Those being weight problems, sexual assault, and male insecurities. The premise of Serinuma losing weight and becoming the prettiest girl in school sets a bad example, implying that women HAVE TO lose that kind of weight to be considered desirable or loved. I don’t like that, it can be hurtful to those who have body issues (with both women and men). It just didn’t feel like it was handled right. If Serinuma told Nanashima and Shinomaya to bug off, then I’d look at this series in a better light. Where we would see both of those dates learn from their shallow judgment to treat others with more respect. With Serinuma giving both Nanashima Shinomaya attention, just ignores how they treated her when she looked different.

Then there was episode eight, which was just terribly handled. We have Nanashima moving in his feverish sleep and sexually assaulting Serinuma. He was already a jerk to begin with, but right then and there it should have ended any chance he had with her as a friend or more. It’s a grey area when it comes to things like that, but in my opinion, Serinuma should have kicked Nanashima out of her life. It shouldn’t have mattered that he was moving in his sleep and not right in the head. What happened was so distasteful for a series to try and spice things up to add some unneeded drama. But for plot convenience, she forgave him after he explained himself and he saved the performance at the theme park. It just went over too quickly and unrealistically. I thought it could have been handled in a way that would teach viewers what is and isn’t OK. But that wasn’t the case, and I felt terrible watching that unfold. Yes, Nanashima did become a better person with how he began to act after the incident. But it felt like a forced plot point more than an organic change. It was as if the story had to make him do that for viewers to continue to care about him (which isn’t good).

And finally came the insecurities that go into the minds of both men and women when it comes to dating, more so for males as we follow Shinomiya. He is small and scrawny, and teased for his pretty boy looks. He started to compare himself to the other men that were interested in Serinuma and would become discouraged about himself. He felt like he wasn’t good enough and was bullied to an extent where people would attack his insecurities. It was as if he had to become what the “ideal man” was to have Serinuma look at him. I’m not sure how Serinuma felt about that, but the fact that Shinomiya was teased and couldn’t get out of that mindset, it just seemed as if he wasn’t able to grow to like who he is. It’s a struggle that many men deal with but won’t publicly talk about, and the fact that this was treated as poorly as it was isn’t the best kind of statement this series could make. It’s as if Kiss Him, Not Me! just dropped that bomb on viewers and then walked away from the entire subject with nothing in him changing.

#relatable
Kiss Him, Not Me: The Complete Series is now available on BD/DVD Combo! pic.twitter.com/9ppUuU3mmf

Despite all my critiques of Kiss Him, Not Me!, it allowed the Jeannie Tirado (who plays Serinuma) to flex her acting chops. She showcased a wide range of emotions, from happiness, to excited, to horny over two dudes being together. It’s not something you typically get in anime roles for women, and giving her the role of Serinuma was a terrific casting choice. In fact, I’d say the same for Michelle Rojas (who played Nishina), who got to perform a wide vocal range as well. As far as the male cast, they pretty much seemed consistent, but I think Ryan Pitts did a fabulous job in being able to stay as high energy as he was throughout the series (playing Nanashima).

For this title, FUNimation gave Kiss Him, Not Me! a standard release with a cardboard slipcover. In the form of extras, there wasn’t much included, other than some promos and textless openings and closings.

3/4: Kiss Him, Not Me taught me how to be a leading lady. No matter what weight, personal interests, or size of the role in VO and in life.❤

In summary, it’s hard for me to say this is something that you have to go out and get. It contains the typical reverse harem antics, but what makes it different is the anime fandom aspect, as well as putting boy love into the forefront. It’s not necessarily a subject that many people would be interested in, but this show did not care, which I applaud. Some fans will appreciate that, but it wasn’t enough to make this series a must see for me. It handled most of its subjects poorly and might leave a bad taste in peoples’ mouths (like it did for me). It isn’t the worst series I’ve ever seen, especially since overall, Serinuma was more in love with her interests than any of the suitors (which can easily be made into a positive direction for future reverse harem series). But it could have been a lot better. Kiss Him, Not Me! failed to become a better series in handling such serious topics which ultimately pushed me away. The fact at how bad they were flubbed makes me upset as to all the wasted potential in the show.

Pros: Jeannie Tirado and Michelle Rojas’ performance; characters looked attractive to their audience; having dates accept who Serinuma was when she admitted being a huge anime fan.