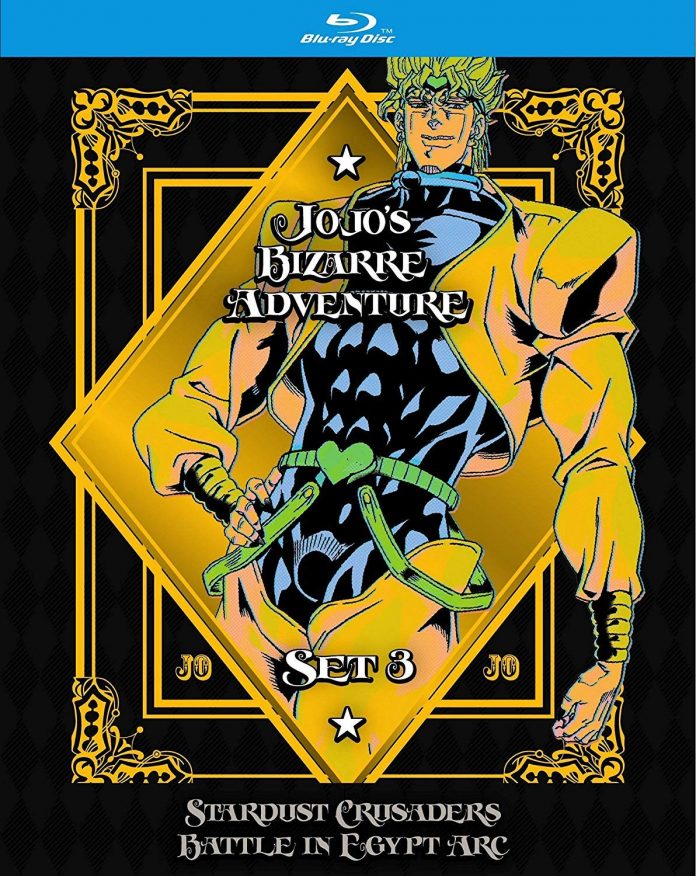 Finally, the century-long rivalry between DIO and Joestars will reach its conclusion. After a long journey through Egypt, we get to see if Jotaro can save his mother. And while JoJo has a considerable following amongst anime fans, I found myself conflicted with how Stardust Crusaders ended. It certainly wasn’t bad, but there were some choices that I found rather puzzling. But for something so beloved, I didn’t think I’d have as many issues that popped up. Still, if you have purchased the previous sets before this one, I doubt you’ll find much wrong with this latest release.

The second half of Stardust Crusaders is the Egypt Arc where our heroes finally reach the country. Along the way Joseph has the Speedwagon Foundation bring in another ally stand user, in the form of a dog named Iggy, to increase the group’s numbers to six. They find out that DIO has another nine stand users to aid him and it’s up to Jotaro and his gang to beat them all and find where DIO is hiding. For the rest of the series, each adversary has their own arc that typically lasts two episodes, and this formula continues until the gang reaches DIO’s hideout. But as you expect during every battle, there is a lot of blood, dismemberment, and explanations, all that JoJo fans have come accustomed to and love.

What I found odd during this half of the release was how hit or miss certain arcs were. There were some I found compelling and enjoyable, such as the battle against Anubis, D’Arby Older, and Pet Shop. All had unique moments creating a rush of excitement. Seeing Jotaro bluff and defeat D’Arby Older at poker was especially amazing with how intense it became. You could easily see the pressure getting to D’Arby Older and his eventually giving up, for fear that even with him cheating he’d lose. Despite having little action, the games that D’Arby Older forced our heroes to play gave the kind of tension that fans expect during a battle. The same could be said about Polnareff’s battle against Anubis and dealing with a sword possessing anyone who unsheathed the blade. So instead of the typical villain being another person, Polnareff (and later Jotaro) had to figure out a way to stop people from being possessed by a weapon. And while in general I found Anubis weak, seeing how it evolved when fighting Polnareff over and over was fascinating. The sword, not the holder, continued to fight and become a more formidable opponent (and I really enjoy sword battles in anime). But nothing beats the battle between Iggy and Pet Shop, which easily became my favorite arc. Pet Shop stand of ice was deadly and used in a way that was cruel and calculated (especially when killing the beggar Avdol hired). Pet Shop felt as menacing and deadly as DIO at points, despite him being a hawk. But seeing Iggy in action was terrific and listening in on the pup’s thoughts was the best aspect of the fight. You find out that Iggy isn’t just some mangy mutt who likes to chew gum and fart. Iggy helping our heroes at first felt like a gag to make viewers laugh. Later on, we see that he’s intelligent, and things began to make sense for why Joseph would bring him along.

However, there were other villain arcs that either missed the mark or felt annoying to watch. There were moments against Mariah that got my attention, like when she stuffed her bra with metal scraps to attack Joseph. Or when she was eventually defeated by having two cars collide into her (especially brutal). The comedy in this particular arc was either predictable or uninspiring. I could easily see where the magnetism was going between Joseph and Avdol. It just felt like Hirohiko Araki made Joseph less intelligent in his battle between Mariah, so I was more annoyed throughout this arc. And I was uninspired having to watch Polnareff take on Alessi. While Alessi’s stand of reverting time was cool, I didn’t enjoy seeing Polnareff as a child and naked. It felt distracting from the central issue of a villain trying to kill everyone. Seeing how perverted Polnareff was as a child was obnoxious. The same could be said for Alessi, considering how nervous he could be if he wasn’t sure he could win a fight. Throughout those two episodes, my endurance was tested as to which character bothered me more.

The tension and drama did pick back up once Jotaro and the gang arrived at DIO’s hideout. The battles our heroes were involved in had high stakes. Sadly, this was when many characters found their demise, which is no surprise in JoJo’s Bizarre Adventure (JJBA). There have been many times where favorite characters die, and this season was no different. Avdol, Kakyoin, and Iggy all gave up their lives to stop DIO and his minions from taking over the world and hurting Jotaro’s mother. As sad as those deaths were, it tied their characters up nicely and felt as if they fulfilled their duty for the audience. They all grew so much and became admirable and honorable people as they died. Still, I am surprised that out of all of them, Polnareff lived, even if it made sense. He had to deal with loss so much and learn how to move on from grief. This made him (surprisingly) a great character to show how to handle difficult life situations.

Still, I was hugely disappointed in the ending, where Joseph was brought back to life by a miraculous blood transfusion with DIO’s corpse. That was the most blatant use of “plot armor” in JJBA and something that I’m not happy seeing. I’d expect this in One Piece, with Pell surviving from an explosion that could annihilate the country. Or in Bleach, with fans learning about Ichigo’s powers. “Plot armor” is in nearly every popular property. I find it hard to let Araki off the hook with something so blatantly ridiculous and it left me with a terrible taste in my mouth. The ending could have been much better, with Jotaro being the sole survivor, and the photo he took with all of his comrades with a smile on his face. After all, with facing DIO, you’d expect many casualties. But instead, Joseph revived and lived happily ever after.

But that isn’t what I found the most disgusting about Stardust Crusaders. The animal violence in the second half of the series was offensive. Watching Cool Ice kick Iggy over and over was something I did not need to see. At all. It was terrifying, perverted, and every other negative adjective you could apply. And quite frankly, it’s getting to the point where I might not be able to enjoy the franchise as much as I once did. I understand what Hirohiko Araki is doing. This certainly shows how evil his villains are, and it does make sense. I found myself hating Cool Ice more than any other antagonist in the series. And there are times where something like that can be necessary, such as during the first season when DIO kills Jonathan Joestar’s dog to establish the rivalry and show that DIO doesn’t like the Joestar family line. But seeing animals brutally killed again and again made me uncomfortable. Does this need to happen with every villain? Why not change things up a bit to add more depth to the franchise, rather than being known as a property where animals come to die. It’s getting out of hand and made me stop and wonder why people don’t take issue with this.

As far as the English cast goes, Patrick Seitz deserves every accolade you can give him for his remarkable performance as DIO. He nailed the essence of the character perfectly. He sounded like pure evil and did a fantastic job doing all the screams of joy and pain he had to do. And I give him two thumbs up for chanting DIO’s catchphrase. Doug Erholtz also caught my attention for how well he played Polnareff. He was able to capture the “hamminess” of the character and brilliantly portray all the emotions called upon when needed. After Seitz’s, it’s one of the better performances in Stardust Crusaders. The rest of the main cast, as well as the one-off cast, sounded as great as you’d expect for the roles (especially with Richard Epcar and Chris Tergliafera). The nice thing about JoJo is that actors get to let their hair down and go crazy, aided by how bizarre the show can get, and it’s something I think many of them enjoy working on in the booth.

What gets my highest mark about the set is how well crafted the limited edition box is. VIZ Media continues to do this series justice and provide JoJo fans with the best a company can offer. I find the way that the box opens (like a book) to be the best way to release a limited edition box, and collectors should be pleased. VIZ Media also packed a ton of extra interviews with cast members Doug Erholtz, Derek Stephen Prince, Tara Sands, Patrick Seitz, and Michelle Ruff that will be a hit for any JoJo fan. Plus VIZ Media gave a key animation booklet with a ton of amazing art for each episode that I found cool to read (and art cards were also included in the release).

I’m conflicted on how I’d rate the second part of Stardust Crusaders. The many highs were a pleasure to watch and I would recommend others to check it out. But there were also many moments that left me shaking my head or riled me up (in a negative way). I didn’t like how the series ended and was a little offended by the writing that kept Joseph alive. VIZ Media went all out with their release, so I find it hard to give the product a low rating. Content-wise, you get what you get, but product wise, it’s easily one of my favorite pieces of memorabilia. But as I said, if you already have the previous releases of JJBA, why would you stop now? If you are a fan, this will be what you are looking for to continue feeding your JoJo craving. These releases are some of the best anime can offer, and it’s hard not to be excited when more are announced.

Rating 8/10
Pros: Captivating story arcs involving certain villains like D’Arby Older, Anubis, Hol Horse; Pet Shop vs. Iggy; Patrick Seitz and Doug Erholtz performances; the physical release is one of the best any anime company can produce; all of the extras included.