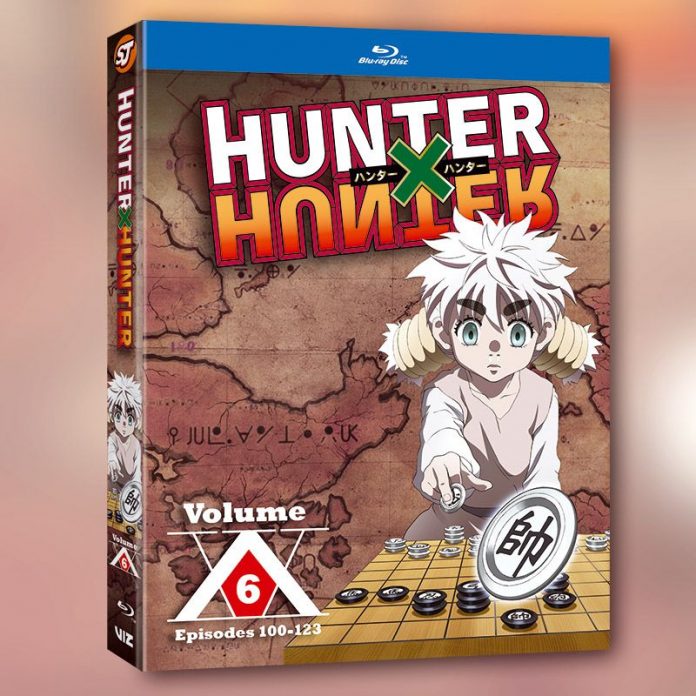 Reviewing the home media release for Hunter x Hunter has been my favorite assignment. It seldom sways away from enjoyable and has been one of the easiest series to binge. The story is magnificent, watching how Gon, Killua, and their new friends traverse the land to become better hunters. You’d think since we are in the thick of the Chimera Ant arc, that I’d be all smiles. However, a choice made by the Japanese Studio (Madhouse) hinders the overall enjoyment of this latest release. It may be controversial to lay blame on that choice, but there are always consequences from the decisions you make in life. And this volume of Hunter x Hunter is no different.

The sixth volume contains episodes 100-123, continuing right where we left off in the Chimera Ant arc. Killua and the team of hunters (Morel, Knov, Knuckle, Shoot, Palm) are all trying their best to stop the selection process King Meruem is about to begin. Things aren’t working in their favor and they continue to run into Chimera Ants, who are observing and trying to kill the team of hunters. Leol (the lion Chimera Ant) is causing issues and has gathered more allies like Cheetu to crush the hunters and become kings themselves. Thankfully Morel can thwart Cheetu as well as kill Leol to keep everyone safe from the consistent attacks. The hunters build a plan to take down the king and recruit two Chimera Ants (Ikalgo and Meleron) to join their ranks and stop King Meruem.

While all this is happening, the king learns board games to pass the time before the selection process. The king is learning all that he can to prove how superior he is. He has mastered nearly every game when a young girl (Komugi) who is the best Gungi player in the world sits across from him. The king is unable to defeat her, changing the way the king thinks of humans. Before, he believed in the survival of the fittest, but seeing how weak she was has altered Meruem’s ideology. His royal guards all notice the change and wonder how Komugi could affect the king as time moves on.

Finally, Morel and the team set their plan in motion as they storm the palace right before the selection process. They’ve lost contact with Palm, who was recruited by the country’s old second-in-command, Bizeff. He collects women he finds attractive to the basement storehouses, and it’s there where Palm drugs him and escapes and creates more chaos for her team. Despite losing track of her, Morel continues with his plan, and sadly all of the royal guard ants are ready to fight, leading to some fearsome battles. Our heroes are still alive, trying all they can to exterminate the ants. Not much is working in favor of humanity, but there is a ray of hope as the chairmen of the Hunter Association, Netero, fights Meruem.

I’ve been impressed with Morel as a character throughout this story arc. I love how he has the perfect combination of brains and strength. He isn’t solely using his brawn and nen to stop the ants as you would expect with his design. Instead, there was an added element of a seasoned veteran, to make him a complete package of a hunter. His intellect continues to shine and he has become a favorite to watch throughout this volume. I’ve found his planning and ability to fight a real treat. Unlike other series that use newer characters as plot devices or cheap ways to garner attention, fans should become attached to Morel and enjoy what he brings to the table as the hunters try to do what they can to stop this infestation.

But every new hunter we were introduced to has done a great job in connecting with viewers. I’ve enjoyed watching Knuckle become a better man with each passing episode. Watching him save Shoot from Youpi was touching and gave a great “brothers at arms” feel. Yet, his pathos was even more impactful when he wanted to fight Youpi to regain Shoot’s honor after Youpi looked at him and let him live instead of killing him on the spot. I’ve come to love this team and find myself more invested with their outcome in this mission the more I watch.

And what was quickly the best part of the release were the faithful encounters that were littered throughout the volume. If there is one thing anime does right, it’s getting the meetings down pat. I was as giddy as a young child when Gon finally met up with Pitou after what she did to Kite, and seeing the rage of Gon toward Pitou was something to behold. It was such a climax that I wish Hunter x Hunter stuck more to it, because of how rewarding it felt to have Gon sit behind Pitou as she healed Komugi. The rage and determination in his voice and eyes made the moment compelling and one of Hunter x Hunter’s best. And then Netero (probably the world’s strongest hunter) meeting the king face to face are staredowns anime fans fantasize about seeing. Two of the strongest warriors in this world finally meeting and about to throw down brings in the same kind of feeling boxing fans get when two heavyweights are about to fight.

Yet despite all of the bloodshed and drama Hunter x Hunter provides, we also get to see a love story build between two of the most unlikely characters; the king and Komugi. A simple board game brought the two together, and watching as the invisible king loses it was not only humbling but adorable. He wants to win to prove how much better his species are, yet he can’t win against this blind and silly girl who is the best Gungi player in the world. And throughout all of the anger, the king feels that despite losing and how ridiculous Komugi is, he can’t live without her. He protects her from a hawk that was scratching her and forces Pitou to heal her wounds. He doesn’t understand why he feels compelled to do these things and doesn’t understand what love is. So seeing young love sprout in Hunter x Hunter was a nice touch, which makes this arc gain even more accolades (although it isn’t perfect).

I’ve mentioned that there was a choice made in the anime that is polarizing and can stir up debate like no other. And that choice would be the consistent narration that ramps up from episode 111 and so on. I understand what the studio was trying to do. Because of so many moments happening at the same time, Madhouse felt it would be better to have a narrator help put all the puzzle pieces together in a neat little bow. A video sent to me on Twitter (thank you, Seth Carnes, for sending it to me) was put together to show just how much was going on during the invasion, and it’s insanely busy.

I’m honestly amazed at everything that is going on and how Yoshihiro Togashi is able to keep everything in sync, primarily due to his health issues. But my problem is two-fold when it comes to the narration. The biggest issue is how distracting it became to “marinate” the story and keep track of what was going on. Much like Durarara!!, which tells a linear story in a non-linear way, viewers are forced to think on their own to keep track. Durarara!! is praised for how it tells a story, and I felt as if Hunter x Hunter could have eclipsed the standard of non-linear storytelling if they took out the unnecessary narration.

And that became the other big issue I had with the narration, when there were moments that didn’t need it. The best example was in episode 118 when Ikalgo was searching for Palm in Bizeff’s storage house. At first, the narration was excellent because it helped explained the layout of the basement of the palace where Bizeff was storing the women he was kidnapping. Then later in that same episode, we get narration about how Palm left a message in nen-writing (which viewers can see) and then it’s explained why this was safer than leaving a physical note. Fans of Hunter x Hunter should already know that, and the narration offers nothing but more lines for the “voice of God” in this instance. And it became my biggest pet peeve throughout. There were times where the narration was needed, and it was great to have a helping hand in piecing information together. Yet the unnecessary parts of it was nails on a chalkboard and felt downright insulting at times. As if viewers wouldn’t have been able to understand the complexity of Palm leaving a message written in nen instead of a piece of paper.

The English cast, the gold standard in dubbing anime, once again blew me away with their performance. Erica Mendez, Cristina Vee, Ben Diskin, and DC Douglas all had standout moments that I found captivating. Yet I return to the mainstays in anime, Kyle Hebert and Grant George, who impressed me the most. The gruffness from Hebert’s Morel fit the character nicely, and I could not get enough of his inner thoughts when planning to attack. And watching Knov have a mental breakdown when he infiltrated the ants’ fortress was George’s time to shine, which gave me chills. So while the hunters were having trouble, the actors truly excelled and this became a massive strength for the volume.

Despite some pet peeves, I found myself enjoying the sixth volume of Hunter x Hunter. While the narration can get annoying, that wasn’t enough to hurt its overall score. It might get a lower rating since there was something that got on my nerves (making it feel like a chore to watch). But Hunter x Hunter continues to show why it’s one of the best anime titles around. The acting in it was amazing, and I’m excited to see how the series finishes in the last set.

Pros: Was a blast getting to know Morel, Knov, Knuckle, and Shoot more; enjoyed the Chimera Ants switching sides; amazing English cast with standout performances by Kyle Hebert and Grant George; the love story between the king and Komugi.

Cons: The attempt to tell so much happening at the same time, creating a lot of unnecessary narration; the pointless narration at points; volume ends at a point where you wish you had more episodes.