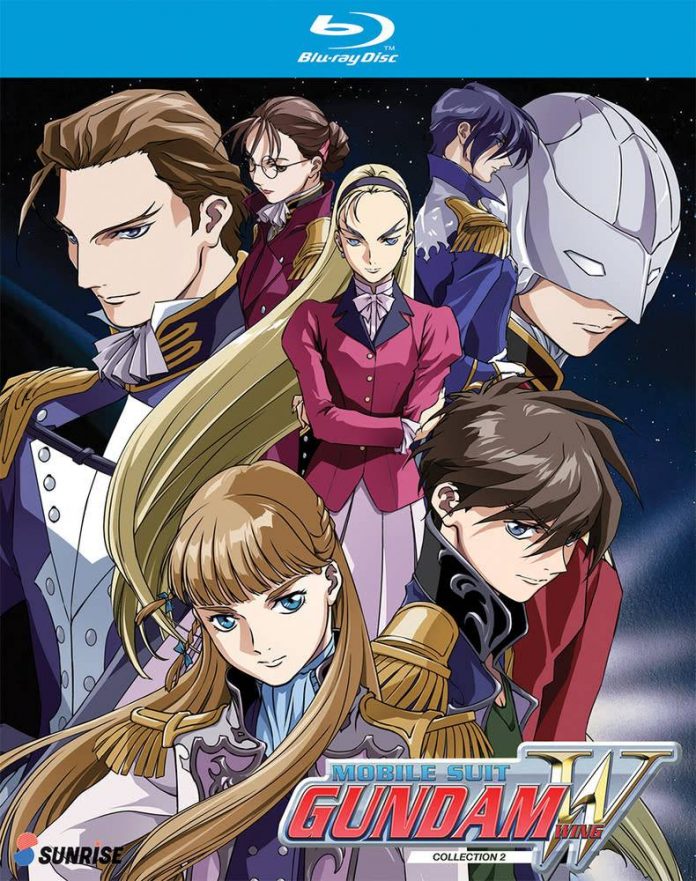 Now that the dust has settled and the war between the Earth and the Colonies has ended, it’s time to take a complete look at Gundam Wing. Most notably the Gundam responsible for bringing widespread knowledge to the franchise. Thanks to the giant robot battles and exciting plot, Gundam Wing began a long-line of Gundam shows getting noticed in the West. However, after finishing this series, I’m left to ask a straightforward question. How? After growing up and rewatching a series (I’ve seen bits and pieces of it from my childhood), I’m left wondering how on Earth Gundam Wing managed to captivate audiences back in Toonami’s Cartoon Network Days.

(If you’d like to see what I had to say for the first part of Gundam Wing, you can check that review here.)

I can't express how much it means to me to have been able to take this journey, but I'll do my best. I never really considered myself an "anime fan" in general, but I watched Toonami every day after school as a kid, and Gundam Wing was my absolute favorite.

My roommates and I used to deliver pizza for the same @pizzahut. Every afternoon after classes we watched #DBZ and #GundamWing on #Toonami together then delivered hot pies until 10. Then bring free pizzas home and hang out all night #simplelife #TuesdayThoughts

In the second part of the release, we watch as Relena tries to spread her message of pacifism as she rules over the Sanc Kingdom. Of course, the Romefeller Foundation has other ideas, as they still strive for world domination. However, they are dealing with a civil war of their own after Treize steps away from OZ and creates his own faction. Still, Romefeller continues to dominate and takes control of the Earth. Thanks to Relena’s passion, she was able to convince Romefeller to disarm themselves and strive for peace (which was absolutely amazing to see her actually accomplish). Sadly, a rebel army from the Colonies called the White Fang declare war on the Earth and is led by Zechs, who was also known as Milliardo Peacecraft (the brother of Relena). It then falls on the Gundam Pilots to fight for peace and stop the ending of lives on both sides.

I think what puzzled me was that a lot of the stuff I was looking forward to developed in a very convoluted way. I wanted to know what Treize’s plan was for OZ to take over the Earth and Colonies, as well as what Sir Zechs was trying to do, with his ties with OZ and Sanc Kingdom. But instead, as soon as the second part of the series began, OZ just fell apart. Because the Romefeller foundation wants to use more Mobile Dolls, and has put in the research to make them stronger, Treize decides to leave the organization—thus splitting up OZ into a Treize faction and others that followed the Romefeller foundation (adding another group to this story). This became a huge issue preventing me from enjoying Gundam Wing thoroughly. I’m not saying the story had to have two clear-cut sides. But throughout the second half there just too many parties to keep an eye on. You had the Colonies, with their rebellious White Fang faction and OZ splitting into two camps, as well as the Sanc Kingdom, and you can’t forget the old Earth Sphere Alliance. It just felt a bit overwhelming, especially for those who might have trouble being able to follow everything.

And it didn’t help with how characters kept switching sides throughout the story. In one episode Treize is an enemy of OZ and in the next one he becomes the new authority of the entire Earth. It left a horrible taste in my mouth. Once they captured Relena and made her Queen (a figurehead), she started to convince the foundation to withdraw their military exploits behind and begin more talks for peace. That was enough to change their minds (which is excellent on Relena’s part) but is unrealistic. No warmongering organization is going to change its mind that fast. Plus, once the Colonies (who have been repressed by the Romefeller Foundation) decided to revolt, the Romefeller Foundation couldn’t believe they’d resort to this after they were making strides to peace. I just got a headache from that scene.

ANNCast is live! Zac, Jacob and special guest @laureninspace scream and fight their way through 49 episodes of the biggest mecha action 1995 had to offer: MOBILE SUIT GUNDAM WING! https://t.co/BblB5Chb8n pic.twitter.com/zJk5LCfhvH

The story overall in the second part of this release seemed to be melodramatic, continuing a theme that’s been there since the beginning. But when the Zero Wing and Epyon Gundam’s were introduced things just felt odd throughout the story. Both Gundam’s were equipped with a system called the Zero System that would “show the pilots’ destiny,” but it was a system where the probabilities of outcomes are shown to the pilot to help them make the best choices in battle. But instead, Treize would present a facade to both Heero and a lesser extent Zechs that it was their destiny that would be shown. It felt silly, and just too played out. It could have easily been described as a method to help human pilots counteract the Mobile Dolls instead of the verbal diarrhea that Treize was doling out.

I also believe that the main cast could have been developed better. In the second half, all of the Gundam pilots seemed useless besides Heero. Heero was the main focal point and his flying to battle after battle was needed. But with what Heero was doing, the other four weren’t required. Quatre did have flashes of usefulness before the five pilots teamed up together, but that was it. Duo would barely show up, and he began playing “house” most of the time. Trowa arrived out of nowhere and ended up going to the circus he was staying at before, with amnesia (which felt cliched). Finally, Wufei had no purpose, and in fact, made things worse until the end. Wufei was never really needed in this series at all and didn’t do anything to enhance the story. Instead, he just made things worse until the final battle, and even that felt weird as he developed some infinity with Treize before he killed him. But honestly, what was the reason to have Wufei in the series at all?

That isn’t to say he was the only issue. I believe that Trowa’s character as a whole would have been better off if Quatre had ended up killing him. It would have given Quatre some growth and really see the consequences of war up close and personal. It might have also been a good way for the other Gundam pilots to learn such a valuable lesson. But having him come back and forget everything only gave Gundam Wing the excuse to drag this series out until they found it necessary to remember anything. It was as if they wanted to reset him as a character after he infiltrated OZ, which made him fascinating to watch.

But besides the Gundam pilots, the characters were mostly just weird, in that they could switch sides or allegiances so easily. Especially Dorothy, who seemed to go to any party that would create a body count. Or characters would go missing until the very end (the five engineers from the colonies). Through all of that, I can at least give Relena kudos for her speeches, in being able to convince others to strive for peace. So I was absolutely surprised as to how Relena grew as a character, despite some misgivings I had earlier. She wasn’t a perfect character, but I at least enjoyed how she was able to change Romefeller Foundation.

When I watched it all you got was Outlaw Star, Big O, Gundam Wing, and a ton of Tenchi Muyo.

As for the positives, the Gundam fights were fun, something that I always look forward to watching. I enjoyed the explosions that you see in a lot of mecha battles, and it was something that was able to bring some enjoyment out of the series. The fights weren’t spectacular like you see in a more recent anime. But I still enjoyed seeing some of the major conflicts and getting to see every Gundam getting a chance to shine. Each had some moments to look cool.

Not to mention that fans of Gundam Wing will enjoy seeing this series remastered in Blu-Ray. It looked great, and is a huge reason why you’d want to buy this. It looked fresh with the remaster and that alone would make Gundam Wing a worthy investment. Getting to see one of the more iconic Gundam series in Blu-Ray is a huge benefit for this release. Especially getting to see one of the better looking 90’s anime in Blu-Ray. Whether it be from the character designs to how the Gundams themselves looked. The aesthetics of this series still were cool to see, despite my issues with the series.

Still, I’m left wondering why this series blew up when it did. All I can think of is that it arrived at Toonami at the right place and the right time, giving those who enjoy giant robots something to watch. There was no need for this series to stretch to 49 episodes, especially with how nonchalant the ending was. Thankfully there’s still a little more to see with the OVA’s, but as of now it just felt anti-climatic.

We had a chance to talk with screenwriter Katsuyuki Sumizawa, who's worked on iconic titles like Gundam Wing, Sailor Moon, and InuYasha. We talk up his career and work, plus his tales of drinking with Hideyuki Tomioka & Masashi Ikeda. No, really. https://t.co/8ybXU2ekSu

The release I received was the standard Blu-Ray release. For extras, it came with clean openings as well as the commercial collection for the series. If you are interested in getting all the cool extras Rightstuf got for Gundam Wing, I’d suggest looking for the Limited Edition release. But if you’d like to finish off the collection of Gundam Wing, you can find the standard Blu-Ray release at Rightstuf.com.

Overall, my feelings toward Gundam Wing hasn’t changed from what I was expecting. Gundam isn’t my favorite franchise, and I tried my hardest to keep any negative emotions at bay, especially considering it’s been so long since I’ve seen parts of it. I felt that the first part was more enjoyable and wished that it could have been shorter than 49 episodes. The characters drove me crazy, especially considering how Wufei was not needed. The giant robot battles are here to stay and looked great, but I don’t think that’s enough to bring in new fans to this franchise. As I’ve said before, Gundam Wing isn’t the old Gundam series to bring back on Toonami. I don’t think it has aged well, and it should be viewed in history as the Gundam that brought the franchise to the west. No need to tarnish that legacy with another run on Adult Swim’s Toonami where many would pick it apart.

Cons: A lot of the characters were poorly written; series felt like it dragged on; too many sides to keep track of; the anti-climatic ending.