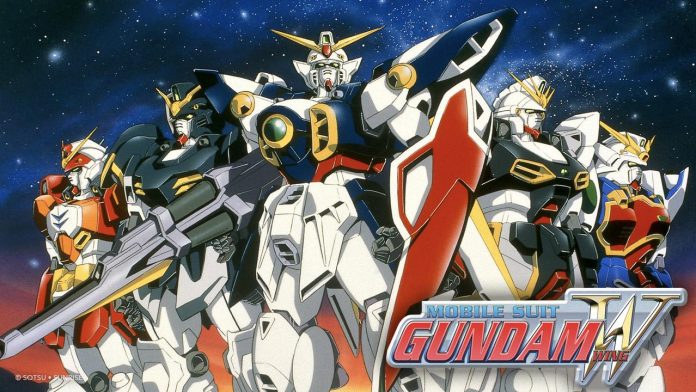 When looking back at the history of Toonami, Gundam Wing is one of their biggest shows, with an impressive legacy. It seems as if Gundam Wing was the reason that mecca anime and Toonami became a thing. After Dragon Ball Z, it might have the best legacy of any show to air on the block. It’s been credited with advancing the niche fandom of Gundam to widespread knowledge in the West and entertaining many during the Cartoon Network days of Toonami. So with Righstuf recently releasing a Blu-ray version of the iconic show, does it stand up through the test of time, and should it have a return-to-glory moment by airing on Adult Swim’s Toonami now?

And our second quick interview today: executive producer Hideyuki Tomioka chats about his time working on the Gundam Wing series, the evolution of the franchise, plus his candid take on where Gundam has gone since the 90s: https://t.co/LqbzBGgDHs pic.twitter.com/K2HIcqA9l4

I wonder if the fans who’ve requested that Toonami replay this series have a significant memory of it. I’m wondering if their judgment is a little bit clouded, due to the legacy that Gundam Wing has. Watching the first 25 episodes that are included in part one of the release, things felt clustered at times and made very little sense. Episodes end with a juicy cliffhanger and then move on to an entirely different plot point at the start of the next episode (really testing my memory). I didn’t get the continuity that I like to have when watching an extended series (longer than 13 episodes). Gundam Wing jumped all over the place, which can make it hard to keep track. Luckily, watching episodes in spurts made picking up all the different agendas and plot points easier. But if this was airing week to week, I think many fans would either lose interest quickly or feel confused about what’s going on (the typical reaction I see many fans have with Gundam series).

From the beginning, Gundam Wing took its time to settle into something enjoyable. I did enjoy watching most of the series, but the start felt like it took too long to get our five heroes to meet up and for the overall story to come together. It felt a little too random at times. But once the show progressed to the more compelling parts of the story I became very thankful to see the Gundam pilots interact with one another finally. But it seemed like Gundam Wing was trying to appear more intelligent by adding all these different perspectives, such as the five Gundam pilots, the Earth Sphere Alliance members, OZ brass and their soldiers, and even a couple of rebel factions that developed through the recent political decisions. There are a lot of things at play in the first 25 episodes, and it can take a bit to get a full grasp of the current political climate. It was fascinating as things progressed, but the start felt sloppy.

Plus, a lot of the characters we are supposed to care about fell flat for me. I know the joke about how Gundam Wing’s leads are all children of the “emo era,” since they act in melodramatic ways. Not to mention that, besides Duo, I wasn’t really in the corner of any of the Gundam pilots. Heero, Wufei, and Trowa all felt like the same character, only with different backgrounds. I can deal with Heero because he’s been billed (in fans minds) as the lead, but having Heero duplicates is a little much. Later on, Trowa joining OZ made for an exciting storyline, considering that some of the Gundam pilots were taken into custody. But for most of the time, we follow five teenage boys who act their age. They are angry at how the world has turned out; they are mad that the Colonies have branded them as outlaws, etc. And Relena’s character having such an infatuation with Heero made no sense. He said he was going to kill her, which doesn’t mean you should do whatever you can to follow him. That felt weird.

One of the top 10 anime love betrayals.

I found it funny that my favorite characters were part of OZ. While being a “Char” replacement, Sir Zechs Marquisse has a backstory that’s compelling (being part of a royal family that was wiped out by the Alliance), and what fans see while Gundam Wing unfolds made him interesting. He ultimately betrays the Alliance and OZ while trying to restore the honor he lost. In addition, the leader of OZ, Treize Khusrenada, was involved in some of my favorite parts. He seemed to know all about Sir Zechs, yet he gave him a powerful Mobile Suit to fight against him. He also knew how a lot of these battles would play out (looking at the arc where Wufei attacks his base), and so I’m left wondering what Treize has up his sleeve. But it’s tougher for me to enjoy a series when the heroes aren’t as interesting or fun compared to the villains.

That isn’t to say I didn’t like Gundam Wing. Quite the contrary, I left the first half of Gundam Wing feeling tremendous and excited about what happened (since I’ve long forgotten how this series went). I found OZ’s plan to fool who the Gundam pilots were supposed to kill very clever, making them kill pacifists in the Earth Sphere Alliance who strived for peace. Which again points to how intelligent Treize is leading the organization OZ. His usage of Lady Une to kill the Colonies with false cooperation is brilliant, considering that typically an organization would use brute force. Now the Colonies have their own civil war over whether they should trust OZ and condemn the Gundam rebels or not. I found that kind of plan amazing and it’s easily the best draw for Gundam Wing.

And if you like giant robot battles, Gundam Wing has you covered. During the start of the series, guerrilla warfare is the Gundam’s specialty. They pop up out of nowhere and lay waste to many Alliance military bases. The animation isn’t exactly what you’d expect from a blockbuster hit like One-Punch Man, but I found the robot battles fun. And due to how durable the materials are that are used to build Gundams, there wasn’t much that other Mobile Suits could do to stop them. It leads to OZ having to develop Mobile Suit Dolls (Mobile Suits that have no human pilot to operate it), and giving one of their best subordinates (Sir Zechs) an abnormal Mobile Suit called the Tallgeese. And while at times it felt as if the Gundams were too strong for the Earth’s defenses it forced OZ to adapt and find strategies to prevent them from winning.

I will say that the iconic moments in this part of the release were all super spectacular to see again. I enjoyed watching Heero tell Relena that he will kill her, and when Heero self-destructed the Wing Gundam. Plus, watching the duel between both Heero and Quatre was a nice way to end the first half of this series. All these moments reminded me of why people seemed to like this series and why it’s been credited as the most popular Gundam Series of all time. I always enjoy watching 90’s anime primarily because of the visual aesthetic of anime at that time. Gundam Wing reminds me of how much I enjoyed Yu Yu Hakusho, Slayers, Trigun, and many other animes produced at that time. But I know that there will be those who are more accustomed to newer anime and would prefer to see series looking like that.

When it comes to the English voice cast of Gundam Wing, you can certainly tell that it was a 90’s dub. That isn’t to say that it’s terrible. I found it great to hear some iconic voices such as Brad Swalie (Quatre), Scott McNeil (Duo), and Briand Drummond (Sir Zechs). It was fun to see what some of the voice cast have done in other projects. So if you are a fan of Canadian Dubs (Black Lagoon, Inyuyasha, Death Note), I’m sure you’ll enjoy hearing how they performed in Gundam Wing (even if it sounded hammy at times).

As far as the physical release, I was given the standard release that contains 25 episodes on four Blu-ray disks. Just a simple Blu-ray case with no cardboard slipcover. It didn’t come with many extras (clean openings), but if you want more extras with your Gundam Wing release, try your luck at getting the limited edition release Rightstuf produced earlier. But if you are interested in owning the series and nothing else, it can be found on Rightstuf.com.

gundam wing, episode nine: superpowered elite newtype assassin Heero Yuy is losing a basketball game to a bunch of high school kids 99-100, but then pulls it out at the last second with a megadunk

there are people who don't love this show?? pic.twitter.com/rToftDfjTW

Overall, I left the first part of Gundam Wing feeling optimistic. that is to say that at least I have been enjoying it. As far as a return to Toonami, I would consider looking elsewhere for that nostalgia type of show (such as Yu Yu Hakusho or G Gundam). I don’t think this series would necessarily translate well with the current Toonami audience. The beginning of the story is random at times, and I don’t think people would like to follow the Gundam pilots as much as I did. But if you are curious why this show was a huge hit, I’d suggest taking a look at it. I forgot how much I enjoyed this series and hope that it can finish strong during the second half.

Pros: Overall a fun story to watch OZ’s plan play out; interesting villains; a lot of robot battles; a great dose of nostalgia.

Cons: Story felt all over the place at the start; next episode would start in odd spots instead of resolving the issue from a previous episode; Most of the Gundam pilots felt too similar; wasn’t a huge fan of Relena so far.