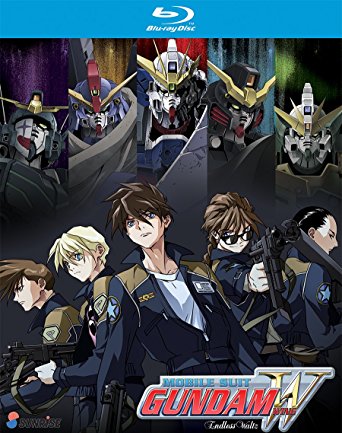 Just when you thought there wasn’t any more Gundam Wing story left, Japan certainly had a surprise for me. In Gundam Wing, with the series ending with Relena looking at Heero as she boards a spaceship, we were given a three-part OVA ending (as well as a movie version of that OVA) to finally put a cherry on top of the iconic Gundam series. I won’t say I’ll miss Gundam Wing after going head first into every possible piece of content I could, but it certainly left an impression in my mind. But the real question about this release was; did Endless Waltz do enough to change how I felt about the series and was it needed in the long run?

Endless Waltz begins a year after the big battle between the Earth and the rebellious White Fang faction of the Colonies. Peace has taken over the universe, leaving the Gundam pilots feeling as if they aren’t needed (and, more importantly, their Gundams). However, the Barton Foundation has risen into the forefront to try and take over the Earth, since the White Fang failed to do so. While Dayton Barton is the leader of this foundation to try and take over the world, they decide to let the daughter of Treize Kushrinada become the new figurehead (Mariemaia Kushrinada) or queen of the Earth (to take over a role that Relena once held). Apparently Treize married into the Barton family making his child part of this new Foundation. We learn how the Barton Foundation was involved with the Gundam pilots. It was this foundation that created “Operation Meteor,” the original plan to send the five Gundams to fight OZ and destroy the Earth Sphere Alliance. We see how Trowa isn’t the real Trowa Barton and how he assumed the name, which is probably looked at as a way to keep out the Barton Foundation (considering what happened in this story arc). The Gundam pilots, as well as the Earth’s defenders, and Sir Zechs’ Marquisse (who didn’t die after all) fight against what the Barton Foundation is trying to accomplish, with Heero and the rest of the team fighting them out.

(I’m starting this review by what I saw in the OVA’s cause there were differences).

I leave feeling mixed about Endless Waltz as the final chapter in the Gundam Wing Story. I think that it was good that we finally finish off the last remnants of animosity between the Earth and Colonies. The Barton Foundation originally planned Operation Meteor to overthrow the current government of the Earth and then take it over themselves. So they weren’t looking to help the Colonies, but themselves (as evident in how the real Trowa Barton was acting before he was killed). The Barton Foundation had to be dealt with, especially with how they were letting themselves be viewed by the public. They decide to use Mariemaia as a figurehead who is only seven years old to help spearhead this new world order. That certainly left a bad taste in my mouth, which is what an evil organization needs to do.

#WhoRemembers: Gundam Wing Endless Waltz released 21 years ago! Did you watch this? pic.twitter.com/kQC8mAizgk

What bothers me is how none of the pilots improved from what they were in the television series. Wufei once again proved to be more of a nuisance as he became part of the Barton Foundation, thinking that he was part of a noble cause. Unlike Trowa, who joined the Barton Foundation and ended up causing more trouble for them. Heero remained his usual self (which is the greatest), and Duo didn’t get as much time either. Quatre, at least, helped stop the disposal of the Gundam’s prematurely, but I had very little empathy for him and didn’t feel like he did much for the series besides just being part of a wealthy family with soldiers who would fight for him.

Even the return of Zechs felt underwhelming as he just returned, gave himself a new code name, and then flew away with Nion. His return has such little impact that it felt as if Zechs wasn’t needed. He was used to stall the Barton Foundation and left with minimal impact, with Heero and Relena getting most of the glory. I felt compelled to follow Zechs’ character after Gundam Wing played out. Instead, he turned into a throwaway character that showed up to add nostalgia so fans could say “we knew he didn’t die,” and then feel happy about it.

I recommend watching the movie version of Endless Waltz over the OVA’s. I thought that the two would end up being the same thing, but I also watched the movie and couldn’t be happier with my diligence, because there are differences. In the OVA’s some parts certainly seemed odd. The story seemed to move fast, and there were a couple of pieces that didn’t quite add up in my mind, which felt weird. In fact, in episode one of the OVA’s ended so abruptly that I was having flashbacks to Gundam Unicorn (the TV series cut). Thankfully for the movie version, the additional scenes added helped the story of Endless Waltz feel complete. In the movie version, we see how Wufei got a ton of civilians and former soldiers to rebel against the Barton Foundation, thanks in large part to Dorothy making an appearance. And we also got to see how Wing Zero was destroyed before it started to fire shots at the Barton Foundation base. Again, this just made things clearer, which I’m always a fan of.

🚨 NEW release alert 🚨
You might want to pull the trigger on getting #6… which means volume 6 of Gundam WING Endless Waltz GOL is out now!
Details: https://t.co/unec4DWU32 pic.twitter.com/HUX8SHvVpq

However, when it comes to upgrades, the animation and art of the Endless Waltz were top-notch. Being able to see this story in Blu-Ray is something that I’m sure will excite a lot of Gundam fans. The animation for the mech battles was stunning to watch and captured why Toonami fans love space odyssey adventures so much. It was beautifully done and something I cannot gush enough about. It was visually fantastic and captured what made 90’s anime look so amazing. I felt as if this movie or OVA series (which ever you prefer) were needed to help round out Gundam Wing.

With this Endless Waltz release, there are two other Blu-Ray discs in this set, which are just recaps of Gundam Wing through the perspective of each Gundam pilot. One disc recapped the first part of Gundam Wing, and the second disc reviewed the second part. There were also perspectives given from Relena, Zechs, Nion, Une, and Treize. These recaps were not dubbed, however, which made them even more of a chore to finish. Now I won’t fault this release for adding these in, I’m all for it. But I’m sure those who are familiar with Gundam Wing won’t bother to watch these. Yes, there are a few never before seen scenes that came up at the end (and also the beginning of the second disc). Plus, there is the novelty of these Operation Meteor episodes getting released for the first time. But to me, they didn’t add much. We see the pilots return to their base, Wufei leaves, with the Duo, Quatre, and Trowa toasting to the new peace that should spread all across space.

In this release, Rightstuf gave it a standard Blu-Ray case with no cardboard slipcover. The extras include clean endings, promos, and original next episode previews. If you want to complete your Gundam Wing collection, you can find this release at Rightstuf in the link here.

In the end, I feel like Endless Waltz did enough to finish Gundam Wing nicely. The remnants of discourse were snuffed out, lives were saved in the name of peace, and the Gundam pilots went on their merry way in a world that now has peace. I mostly enjoyed watching Endless Waltz over the Gundam Wing series because of how spectacular the animation looked. Some parts could have been handled differently, and I would readily recommend watching the movie version over the OVA’s. But if you are a true Gundam fan, I can’t see how you wouldn’t want to get the Endless Waltz release to finish this series the way it was supposed to.

Pros: The animation was dazzling throughout the entire OVA series and movie cut; The movie cut was enjoyable to watch; seeing how Trowa became a Gundam pilot was interesting; finish the story of Gundam Wing nicely.

Cons: OVA cut is inferior to the movie cut; the never before released recap discs didn’t do much for me; the pilots never improved as characters.