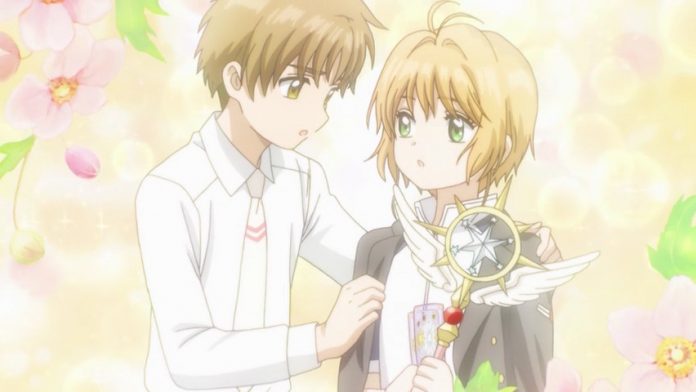 Growing up in the 90s and 2000s, I always had a soft spot for Cardcaptors. While the English dub and localization did a lot to change the series (trying to make Li the main character, English names, etc.), the series caught my imagination when I was a young anime fan. Now, as we fast forward to today, I am ecstatic that fans of Cardcaptor Sakura are able to experience a new journey of the greatest sorcerer on the planet. And while I’m not sure how big of a franchise it is, I’m led to believe that I’m one of many who are excited to dive into a whole new adventure (especially since the original series had a run on Toonami). So what is Sakura up against after securing the Clow Cards, and is junior high even more challenging for her?

This new adventure for Sakura begins as she starts junior high school. It’s here where Syaoran returns from Hong Kong and informs Sakura that he will be staying in Tomoeda for the foreseeable future, bringing nothing but bliss to Sakura (considering the two seem to be more open about how they feel for one another). That night Sakura has a weird dream involving a mysterious cloaked figure. Once awakened, Sakura checks on the Sakura Cards (the Clow Cards before capturing all of them) and notices how they are all blank and powerless. With Kero and Yue’s help, the three begin a quest to find out why this has happened. Strangely enough, weird things start to happen in Tomoeda, reminiscent of when the Clow Cards were running amok. Sakura discovers a new dream key that she can use to capture and activate new magical forces and turn them into the form of clear cards. With her guardians and friends’ help, Sakura begins another card capturing adventure as she tries to figure out why her Sakura Cards have been rendered useless, and what are these new clear cards, and who is the mysterious figure she keeps seeing in her dreams.

While I’m typically disappointed when the same plot point is used to continue a story, I enjoyed the direction of Cardcaptor Sakura: Clear Card. While this does make the story a bit predictable and formulaic, I found myself intrigued by what Sakura was dreaming (she was having visions of her dreams while awake) and why her cards suddenly became useless. So while I’m normally hoping for stories to go to a new place, there was something familiar about this new plot that made Cardcaptor Sakura: Clear Card feel comfortable. You know what you’re signing up for when you hear the phrase “Cardcaptor,” and I appreciated the fact that the new story held true to its predecessor. It isn’t going to win you over with a convoluted plot (like another CLAMP manga that blew me away). Still, I’d probably prefer a more reliable story than something entirely out of character.

And from the first 11 episodes, I like the changes in the clear cards from the original series. The cards themselves aren’t exactly a word for word copy of the Sakura Cards (Spiral, Gravitation, Gale). It helps give Cardcaptor Sakura: Clear Card its own identity without playing second-fiddle to the previous series. The new cards also look fantastic, and I loved the design that CLAMP came up with for them. It also had me expecting to see some exciting combos that weren’t used in the previous series. It was fun and easily continued the same feel and style from years before.

One issue was how slow the story took to develop. At the start, we have Sakura going on another adventure to capture these new cards. But a lot of the set was more toward her regular life and how her relationship blossomed with Syaoran. It’s not that I’m opposed to that, but I wouldn’t have minded more of a balance between the story of her capture of the clear cards and her regular junior high life. The split felt more 70/30 on the mundane side, giving the series a few more lulls. And so much of the story still hasn’t played out yet, at least in my view. I don’t feel close to knowing why all of this is happening. There have been some scenes showing Eriol Hiragizawa (the reincarnation of Clow Reed) talking with his retainers about how they can help Sakura from afar and he seems to have more information about why the clear cards are around. But the story didn’t go much further into that at the end of this release. So I’m left wondering what is going to happen next.

Not to mention that the series’ formula was as predictable as the previous one, with each episode having a new card to capture (much like a monster of the week type of storyline). The overlying plot point that held the first 11 episodes together was only hit on for a few moments when Sakura would talk about why this was happening and what made the Sakura Cards lose their power. And so, just like in the first series, we get Sakura in a new costume, looking for a new card to add to her arsenal to help find more powerful clear cards. It’s simple, but it could be difficult for an older fan to sink their teeth into it.

I was impressed with how the newer series upped the animation quality while still keeping the original look of CardCaptors. I dare say it did a better job in that department than Fruits Basket. But it was beautiful to see how this series looks since the animation process has advanced as far as it has. Despite those advancements, it didn’t feel like I was watching a brand new series. While it looked fresher, the aesthetics of Cardcaptors wasn’t lost. The new series enhanced the viewing experience while staying true to the original series, something you don’t often see.

The action was also fun to watch, as it was a nice callback to what fans remember from the earlier series. It was nostalgic to see Sakura once again twirl her wand to begin a battle or capture a card, and at times I couldn’t wipe the smile off my face. It was even more evident when Syaoran joined in the fray and used his magic to where it felt like it was only a couple of years ago that the original Cardcaptors anime ended. I only wish there were a few more battles where both Sakura and Syaoran team up to fight.

There is just one other thing that crept into my mind as I was watching Cardcaptor Sakura: Clear Card. Was Tomoyo always so obsessed with Sakura? I know that they are best friends, but wanting to videotape her in new costumes, almost like she wants to spy on her 24/7, left a bizarre impression on me. It was borderline obsessive, and made me feel uncomfortable. Maybe it’s just me, but there are elements between the two girls that felt a bit off.

FUNimation decided to bring back Monica Rial and Jason Liebrecht to reprise Sakura and Syaoran’s roles, respectively. It’s a nod to their work back on Tsubasa Reservoir Chronicles, a manga series (with an anime adaptation) that I cannot recommend enough. And while both are fantastic actors in their own right, neither sounded young enough for their characters. I think I feel that way because of how old I am and knowing who the voices of those characters are. It’s difficult for me to imagine that both are junior high students when the actors playing them are not. But that’s a difficult position to be in, and I don’t think the answer is to find junior high actors to voice the iconic roles. I think both did the job admirably, and it’s more on me to disconnect between Liebrecht and Rial and think of the sounds more as Sakura and Syaoran. And it wasn’t just them; nearly every voice actor assigned to a child was not quite authentically junior high sounding, which is again a VERY HARD ASK. The only two that sounded natural to me were Jill Harris and AmaLee. That isn’t to say the acting was terrible because the acting hit the necessary chords emotionally. Scenes of the sprouting love between Sakura and Syaoran were terrific and were enhanced by Rial and Liebrecht’s acting. It was simply difficult to convince me that these were junior high school students’ voices. And that’s more on the reviewer than anything.

The physical copy of Cardcaptor Sakura: Clear Card was a mixed bag for me. It came with some fun extras like an episode commentary and an OVA episode that was dubbed in English. But for some reason, this release didn’t come with a cardboard slip-cover, which disappointed me. I own the second part that I’ll be reviewing later and that did have a cardboard slip-cover. So why didn’t the first part receive one? It’s a little confusing and one kind of detracts from the enjoyment of owning the series. So while the included extras are a considerable boon, seeing it on a shelf was aesthetically poor.

After the first 11 (12) episodes of Cardcaptor Sakura: Clear Card, I’m delighted that a continuation of one of my favorite anime series happened. It was something I didn’t realize I needed, and is both nostalgic and comfortable to watch. Seeing Sakura get an update in animation and fights was too cool, and watching her relationship with Syaoran grow was something to behold. I’m interested to find out why this is happening to our heroine and hope she can capture all of the clear cards to stop whatever bad is going on.

Pros: Loved the continuation of the main story; the upped animation quality looked beautiful and still felt like the original series; the clear card designs; using the Japanese names instead of the localized ones.

Cons: Hard to believe that the voices provided sounded like junior high students; the story hasn’t progressed much in 11 episodes; some lulls due to Sakura’s normal life; the Blu-ray case not having a slip-cover.