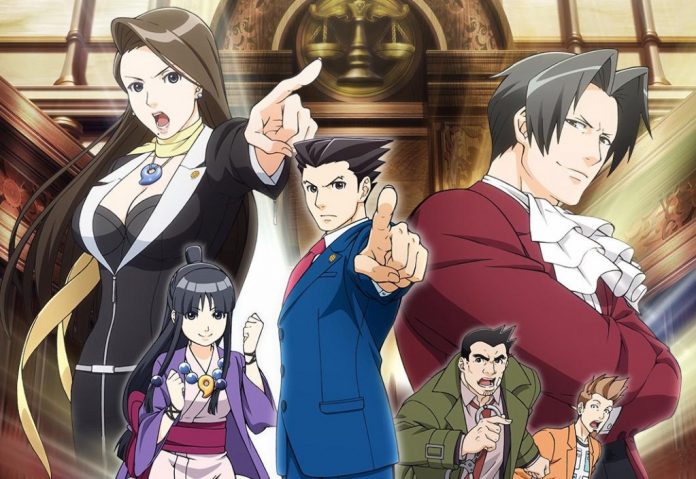 Toonami Faithful earlier reviewed the first part of season one which you can check out here if you missed that. This article will cover more what happened in episodes 13-24 as well as some of the extras that weren’t included in the first part of the Ace Attorney release.

For those who are huge fans of Ace Attorney, I’m not sure how you’ll feel about the anime. While I’ve always wanted an anime adaptation of the video game, the effort A-1 Pictures put forth could’ve been better. Although I was glad to see the studio stay faithful to the video games, the animation and swiftness of the series limited my overall enjoyment. Still, Ace Attorney: Phoenix Wright and Justice for All made me nostalgic for when I played the original games. And while I’m sure some fans wish this property was handled better, I think it’s worth being purchased by hardcore enthusiasts.

If you are unfamiliar with the world of Ace Attorney, the world has a swift judicial process, where accused people have three days to be proven innocent. Prosecutors will do whatever it takes to get a guilty verdict. And even if there might be evidence to the contrary, these prosecutors continue to do what they can to win their case. Phoenix Wright has just become a defense attorney, after having been saved by one when he was a child. And now he will do whatever he can to help justice prevail and send those who committed heinous crimes to prison.

The first half of this release tells the story from the first Ace Attorney video game. I already covered that in a previous review, so I won’t go into massive detail about it here. It was great to see the first game adapted, and it had some powerful moments, for example when Mia dies, and when Phoenix obtains a not guilty verdict for Maya. But I was saddened at how poor the animation quality looked. There were some rather odd camera angles focusing on Maya’s feet, which I did not understand.

The last half of the season adapted the second video game, Justice for All. However, not all of Justice for All was shown in this release.  We see the second turnabout involving a private doctor (Dr. Turner Grey) who wants to speak with his former nurse, who died instead of the first case that took place in the game. I’m not sure why the anime decided to skip the first case, especially since this series has been praised for being so faithful to it. So not being able to hang out with Phoenix, Maya, and the rest of the cast was tough to swallow. I can see how the anime makers believed it made more sense, since the second case from Justice for All starts with Maya back in her hometown after leaving Wright’s office. But I wish that A-1 Pictures had stuck to the original story.

Fans still get to see the remaining cases from the game, as Maya is once again framed for the murder of Dr. Turner Grey. He had wanted to do a spirit channeling (which Maya was to perform) in order to talk to his former nurse after his reputation was ruined. Dr. Grey wished to contact the nurse after he was investigated for medical malpractice. She died in a car crash, and a young woman convinced the doctor to try the spirit channeling to clear his name. Phoenix then finds out that the young woman who talked the doctor into this was actually the nurse who supposedly had died, Mimi Miney. Under stress and exhausted, Miney lost control of her car and killed her younger sister. What makes this case incredibly difficult was that Maya’s aunt, Morgan Fey, was also in on a plot to lock Maya up for good and for her daughter to take their “rightful” place as the family’s head.

Once Maya was cleared, she and Phoenix worked a case involving the murder of the Berry Big Circus ringleader Russell Berry, when the famous Magician Maximillion Galactica was arrested as the culprit. Many of Maximillion’s coworkers didn’t like him (due to his personality) and believed he murdered the beloved ringleader. Russell and Max had disagreed about his current wages. However, it turns out that an acrobat named Acro murdered Russell by accident, as he was planning to kill his daughter. His daughter (a lion tamer) put pepper on Acro’s younger brother’s scarf, which caused the lion to bite his head. Acro wanted revenge, but Russell Berry ended up dying trying to protect his daughter.

Finally, Phoenix attempts to gain an acquittal for Matt Engarde after a famous hitman (Shelly de Killer) abducts Maya. He tries to force Phoenix’s hand to get his client (Engarde) off for the murder of his rival, Juan Corrida. Phoenix tries everything in his power to keep the trail going, even after the return of his counterpart Miles Edgeworth. Thankfully, with Miles, Gumshoe, and the rest of the central cast, Phoenix is able to get a full confession from Engarde (with some helpful testimony by Shelly de Killer). It’s here where the first season ends.

It was enjoyable to see these cases play out in the anime, much like in the game. It is a lot darker, given all of the silliness in Ace Attorney, than one would be led to believe. Being in a world where guilty verdicts are handed out like traffic tickets can be terrifying for all who inhabit the area. And watching Phoenix fight for justice was something that spoke to me. And things got darker and sadder as it continued. It was tear-jerking to see Maya’s family set her up for murder due to the family rivalry between the mystics. Maya and later her cousin Pearl had to watch as Pearl’s mother (Maya’s aunt) was arrested for aiding in a murder. Plus, the murder of Dr. Turner Grey was sad—seeing how Mimi wanted revenge for being blamed for medical malpractice and the death of her sister. The turnabout involving the circus was even more gut-punching when we learned why Acro murdered Russell Berry. While Ace Attorney had many silly moments, the more emotional ones came to light. It added a wonderful element that I felt the video game was lacking.

We also got an exciting story when Phoenix finally took an assignment in which his client was guilty. Phoenix would remark how he’d only like to handle cases where he trusts his client and feels they are innocent. That changed with Engarde, and it forced Phoenix in a difficult position. I’d rather have seen how Phoenix would handle a situation where he’d have to gain an acquittal for someone guilty or face the punishment of losing his license or having his client achieve a mistrial. And even though Ace Attorney added some wiggle room for Phoenix to do his job and have Engarde behind bars, I wish it was bleaker than simply trying to save Maya. To Ace Attorney’s credit, this season felt heavier than the first part.

Sadly, the animation didn’t improve, which hurt the viewing experience. I’m surprised that I preferred watching the video game more than the anime. And while it wasn’t TERRIBLE, it was disappointing how poorly it looked. Given how popular Ace Attorney is, not having smoother animation is a downer.

And what hit the hardest for me was how lackluster the new characters were. I wasn’t overly impressed with Pearl and Franziska von Karma when they were introduced in the anime. In the video games, they played a larger role and left a big impact on me. But in the anime, they didn’t do that much at all to stand out. They were just there and seemed like props,  and later just disappeared. The thing that Ace Attorney has always nailed is their characters. People were able to connect to them very quickly. That didn’t seem to be the case in the anime.

The English dub sounds great and the casting fit the characters well (which I discussed in the previous review). Some viewers might be surprised to hear the localized names in the anime (since FUNimation hardly ever does that), but I’d prefer it like that since that’s how I experienced Ace Attorney. Every performance felt strong, and I liked the rendition of Franziska that Jessica Peterson created. It gave the new prosecutor a strong voice that was much appreciated. The entire cast from the first 13 episodes was just as strong in the latter half, and if you are curious how I felt about the performances of Eric Vale, Lindsay Seidel, Christopher Wehkamp, check out the first review Toonami Faithful did here.

FUNimation included a few extras, such as English episode commentaries and two blooper reels. I was shocked since it is rare for blooper reels to be added to a home media product. However, this release isn’t my favorite because FUNimation took away the cardboard slipcovers for re-releases. While this particular product has the entire first season, it comes in a bare Blu-ray case. I hope that this will change down the road when FUNimation does a full season series release in the future.

So I leave Ace Attorney feeling mixed. While I’m pleased that the video games get an anime adaptation, it wasn’t as strong as it could have been. With poor animation, missing a turnabout, and the lightning pace, this series is another in the list of poor video game anime adaptations. But I give some credit to FUNimation’s English dub, and while I wish they could’ve brought in the voice actors from the games, the cast does a fine job. If you’re a hardcore fan, this release is worth your attention. But I wonder how this will grab casual viewers. Nevertheless, I still look forward to more Ace Attorney and cannot wait to check out the second season.

Pros: Getting to see the first two games animated is a treat for long time Ace Attorney fans; an almost completely faithful adaptation that captures the aura of the series; a decent amount of extras included; a solid English cast.

Cons: The animation for the series is surprisingly lackluster; a lot of the small moments/interactions that make Ace Attorney great were missing due to the pace of the series; a case being taken out in the second half of the release; choosing the localized names will be hit or miss with some fans; no cardboard slipcover.