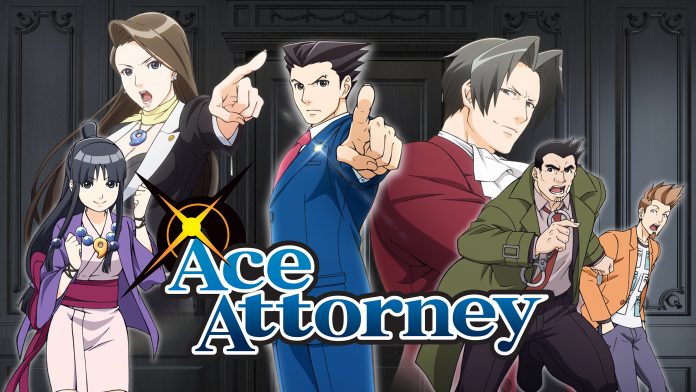 I’ll start off by saying that I am a huge Ace Attorney fan. I’ve played many of the games and always thought that there should have been an anime made. The characters, lore, and music all had the necessary traits that would allow a studio to make an anime that would please fans. So when I heard that Ace Attorney was going to get an anime, I was thrilled. It was all I ever wanted, and the fact that it happened made me happy and pleased without seeing a single episode. Sure, it could have been a train wreck, but I had faith that no studio could mess this up. From what I’ve seen I am pleased with what Ace Attorney gave its fans, but it is by no means a slam dunk of a show.

⚖️ what is Ace Attorney and why you should play it – a thread ⚖️ pic.twitter.com/TYD9wSQyJf

The story of Ace Attorney: Part One follows the same plot you’d get from the first game of the franchise. So if you played Ace Attorney, you know right away what we are dealing with, since all cases (in the first game) were adapted from these 12 episodes. For those who might not be familiar with these games, they take place in Japan, where Phoenix Wright has just become an attorney and his first case is defending his best friend, Larry Butz. Wright proves his friend’s innocence and shows he has what it takes to protect his clients. This leads to more murder cases coming into Wright’s lap. There’s the case of his mentor’s death, where the victim’s sister Maya was falsely accused as the murderer. Then Wright and company had to defend TV star Will Powers from murdering his cohost on the show. And it ends with Wright defending his old friend and prosecuting star Miles Edgeworth, not once, but twice on murder charges.

Now there might be some who worry about the studio straying from the original storyline. This adaptation, however, was very faithful to the video game. So it did feel as if the old games were coming to life before my eyes. Thanks to that faithfulness we got to see how each case and murder affected Wright, his team, and the people he defended in a way that wasn’t easily conveyed in the earlier games. In fact, the anime might have added a scene or two (here and there) to help paint a complete picture of a case. Adding those scenes helped enhance the story I came to love from the older handheld games. Seeing the emotion in areas we weren’t previously able to add a layer of pathos that helped me (and potentially) other fans with the Ace Attorney cast. Instead of reading the text over and over, this anime was able to bring the franchise to life. Fans have longed to see the crazy antics in the courtroom happen in real time instead of happening by smashing the “A” button over and over. We got to see all the objections, hold it, etc. animated.

I enjoyed how in the Ace Attorney games each case could be connected with another. In the five cases that we see unfold in the courtroom, four of them became related (some more directly than others) and it forces viewers to pay attention to every little detail. It’s the same as you’d get in typical live action cop dramas (NCIS, CSI, etc.), even if it seems a little childish. However, the fact that it follows the same type of recipe that cop drama shows do is what I found to be a strength. There aren’t many anime series that mimic what Western cop dramas do. For those who might like shows such as Law and Order, you might find yourself enjoying Ace Attorney to help fill a need for courtroom drama.

Ace Attorney in a nutshell. pic.twitter.com/ue9jbEWd1V

Interestingly enough, FUNimation decided to record the English dub with everyone using the localized names that fans were given in the games when they first came out. So you get funny names like Larry Butz, Wendy Oldbag, and Dick Gumshoe. When it was simulcasting on Crunchyroll, fans had the option to either hear the localized or traditional names, so I found this option interesting, although some might get upset about that decision. It’s reminiscent of what FUNimation did all those years ago with Case Closed (which was brought up during the episode commentary in this release), and not many people were thrilled with the localized names in Case Closed. I’m curious what lead to this decision, because FUNimation typically will use the traditional names when dubbing. I don’t mind it, only because I grew up on the localized names, but I’m sure there might be a few who aren’t too thrilled to find that out.

Sadly, Ace Attorney didn’t do much when it came to its production. It didn’t look as crisp as I had hoped. It was lacking in some areas, where shots would seem odd or off. It was especially noticeable when you see the terrible 3-D audience in the courtroom at times. There were moments that I enjoyed, such as when you’d have witnesses go crazy after being questioned by Wright, or when either lawyer was pointing dramatically at the other. They help capture the spirit of the Ace Attorney games. But It didn’t seem as if this anime quite captured the magic of the games that have amassed a large fan base. The animation seemed safe, as if the studio didn’t want to go overboard and potentially make things look less like Ace Attorney. Even the fault faces from characters were subpar, Which made me believe that this anime was going through the motions instead of trying to capture what made it unique in the first place. And some of the cases went so fast, it makes me wonder if those who haven’t played the game can follow the line of thinking of both Phoenix and Maya, specifically in the third and fifth turnabout. Parts in the game where you’d get more information about the backstory weren’t added in the anime (or shown without any audio). You have to take a leap of faith to understand where Wright is coming from. Those who haven’t played the games might feel a little confused, or think that the conclusions Wright reaches come out of left field. I think that the anime putting five cases in just 12 episodes is the main problem. I wouldn’t say I felt like the anime was rushed to match the first game in 12 episodes perfectly, but looking back, it wouldn’t be a stretch to come up with that conclusion.

Something that caught me off guard was how much the camera seemed to focus on Maya’s feet through the first 12 episodes. It felt odd because I never thought of Ace Attorney of having a lot of fanservice. Sure, Mia certainly fits the bill for fans to look at (especially when she’d wear the same clothes that Maya had on). But there were a lot of times where they focus mostly on Maya’s feet, which just felt weird and made me uncomfortable.

Instead of getting the cast who played these characters in the video games, either Crunchyroll or FUNimation (my money would be on Crunchyroll) decided to have new voices play the iconic characters instead of having the original actors reprise their roles (such as Sam Riegal, Kyle Hebert, and Abby Trott). I’m sure there will be folks who aren’t too pleased with that decision— fans typically enjoy hearing consistent voices for characters. If you are turned off that much by the new cast, then I’d suggest not picking this title up.

More on the cast of this release: Eric Vale picked up the lead role of Phoenix Wright (something I was not expecting), which must have been a fairly nerve-wracking role (due to how popular Phoenix Wright is). He handled the puns and delivery of Wright well and sounded what I’d expect the character to sound like. In fact, his nailing the “objection” line is the most critical part of playing Wright, as I found that to be the strongest aspect of Vale’s performance. And while I enjoyed both Lindsay Seidel (Maya Fey) and Christopher Wehkamp (Miles Edgeworth) in their roles, at times they didn’t sound as crisp as they can be. Which shocked me considering how talented both are (and how much I enjoy hearing both in all kinds of anime). Toward the beginning, both seemed a bit stiff in their performance, and later on the two sounded much more comfortable with their roles. Other than that, the cast appeared to be playing the characters safe, and not going as crazy as I think they could have been.

For this release, Ace Attorney: Part One comes in a standard Blu-ray case with a cardboard slipcover. It includes an episode commentary, which was enjoyable, especially when the guests were talking about the localization of Ace Attorney (it included Eric Vale, Lindsey Seidel, Kyle Phillips, and Tyler Walker). FUNimation was also kind enough to provide a blooper reel that was pretty funny. Listening to anime bloopers doesn’t have the same impact as live-action bloopers, but it’s still fun and I’m glad it was included. Finally, both a textless opening and closing song were included.

I’m a bit pessimistic about the first part of Ace Attorney. I am happy an anime was made in the first place. But when looking at the series critically, there’s a lot more that could have been done to make this release better. Things seemed rushed, and that may prevent anyone who might not have already played the games to support this anime. This series seems to bank on the fact that you are already invested in Ace Attorney. It’s because you played the games, not because you discovered something new, making it hard for newer fans to feel comfortable watching. I think it’ll give fans of cop dramas something they’ll enjoy. But in general, I am disappointed since it could have been a lot better and less childish. I’m hopeful that things will improve in the second part of the series. Otherwise, Ace Attorney might be better suited to remain a game instead of a multimedia franchise.

Pros: Seeing the Ace Attorney games come to life; added scenes added to the story; how connected to the story was; hearing “objection”.

Cons: The animation production seemed bland or terrible at times; banks on the fanbase getting invested instead of attracting new fans; odd fanservice; will be a divide with the localized names.