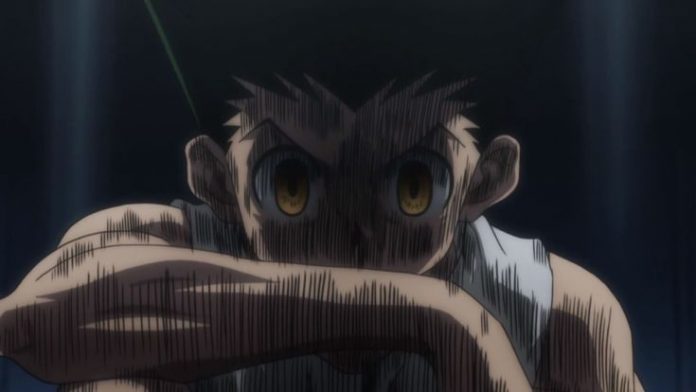 Hunter x Hunter is easily one of my favorite shows to have aired on Toonami in the last few years. It was already a property I loved, having bought the Viz releases of the older anime. And being able to see the newer series go significantly further into the story was an absolute delight. There’s so much to say about the series. Still, I’d like to focus on the fun, adorable protagonist, Gon, and how he subverted my expectations for a shōnen protagonist in a magnificent way.

At the start of the series, Gon’s aunt warns him about the dangerous prospect of becoming a hunter. To prove her point, she requires Gon to catch the master of the swamp (something his father accomplished at his age) to prove he is capable of even taking the hunter exam. While this proves easy for Gon, he soon learns that his aunt was correct about the difficulty. Once aboard the boat to begin his quest to be a hunter, Gon sees how unexpectedly dangerous even something as simple as travel can be, as the ship hits a fierce storm, overwhelming much of the crew and hunter exam applicants. While he and his newfound friends (Kurapika and Leorio) make it through just fine, this is the first time Gon sees the truth in his aunt’s caution.

These events and several more at the start of Hunter x Hunter are alarm bells and set up for the later trope subversion of what’s to come for both Gon and the audience. But both (Gon and viewers) only half realize this; while it’s clear that becoming a hunter is dangerous for most people, Gon passes each challenge with ease. Gon seems unique, with even a few of the hunter examiners telling him as much. And while Gon overcomes every challenge with little to no issue, there are more warning signs in the background, showing risks that are more subtle than the life-threatening difficulties of the hunter exam.

People die in Hunter x Hunter relatively frequently, and while Gon is not happy about it, he generally doesn’t get too upset by it. Random people meet their demise in the hunter exam around him. Killua, his friend, murders an examinee in front of everyone. However, Gon is far more upset that Illumi was traumatizing and bullying Killua than the murder committed by his friend. It’s not explained why Gon seems so unaffected by the random death parade that goes on around him in the first arc, but I’d posit that it’s due to a combination of recognizing those that died did so knowing the risks they took and that the people that died have little to no connection to him. Gon’s more upset over what is done to Killua because he is his friend. It’s not that Gon doesn’t care about the needless loss of life, unlike Hisoka who revels in others’ misfortune. But when death comes from an act of malice rather than a risk, Gon seems to have a stark reaction.

Fast forward to Yorknew City, where viewers see a new side of Gon that hadn’t been public. Gon becomes apoplectic when he observes the actions of the Phantom Troupe. He had initially seen them as like Hisoka, a group that lacks all care for others. However, when it became clear that they were capable of empathy due to their distress at the death of Uvogin, Gon’s rage soared to where he could hardly contain it. If not for his overriding concerns for Kurapika, I suspect Gon would have failed to control his anger. Gon first-hand saw both sides of the Phantom Troupe and was not prepared for the tonal whiplash of seeing how people with compassion and hearts can turn them off. Gon witnesses truly heinous actions and seems to come out unscathed following Yorknew, but there are invisible scars upon him that will show much later.

Following these events, Gon and Killua travel to Greed Island continuing their search for Gon’s father. The story wastes no time in introducing a new antagonist – Genthru, the Mad Bomber. Genthru is murdering Greed Island players in his quest to win the game being played. It seems he is without any moral compunctions as he is willing to mislead, backstab, and extort those around him. As expected, Gon ends up having to deal with him for his survival. However, being the pure soul that he is, once he defeats Genthru, Gon cannot bring himself to let the villain or his henchmen die, even after all they’ve done. Previously Gon wasn’t as forceful with trying to save every life around him (as the hunter exam showed), but seeing the Phantom Troupe’s callousness towards others seems to have changed that. Gon now puts more value on the lives of people he barely knows than he did before those events. Gon’s invisible scars seem to have forced him to change for the better.

It’s during the Chimera Ant arc where every bit of this setup pays off brilliantly, and ultimately the pure shōnen hero trope is smashed into pieces. At the onset, we’re introduced to Kite, a student of Gon’s father, Ging. Gon begins his journey learning about the chimera ants with the newly developed desire to prevent death where possible. He is more than willing to put his life on the line to help with Kite’s investigation. After all, Kite started Gon’s journey to becoming a Hunter in the first place and can be viewed more like a father figure for Gon more so than his actual father. And the pressure of keeping his loved ones alive continues as Kite puts all his trust into Gon during this story.

When Gon first encounters the chimera ants, he is just as reticent to kill them as he had been with Genthru, despite Kite’s warnings of the dangerous situation. This is likely a result of Gon’s processing of his encounters with the Phantom Troupe – not wanting to be like them by shutting his empathy off completely. After seeing their callousness, he started to care more about not letting people perish, including enemies. Additionally, the Phantom Troupe had even tried to recruit him, which could have fed into Gon’s desire to not be like them. Later on, Gon is only barely able to kill any chimera ant on the rationalization that they’re uncaring beings, unable to empathize for even their own. However, Gon’s internal struggle with death and murder reared its ugly head once his mentor Kite is murdered.

When Neferpitou (Pitou) ultimately kills Kite, previous scars that affect Gon opened up to a deeper level, putting the pure shōnen hero subversion into gear. Gon cannot forgive Pitou the way he did Genthru or the Phantom Troupe when he was acting the way a typical hero would. The damage is too much and too personal, such that Gon cannot cope. The secret danger of being a hunter, beyond the risk to one’s life, that had been subtly warned about time and time again, presented itself in a flash. Gon’s repeated exposure to malice tainted him with a deep hatred, causing him to develop an angrier side that no one believed to be possible for the character that inspires many to “smile again.”

Kite asked if Gon could kill a chimera ant even if they showed a level of compassion. And I’m sure many fans weren’t sure the young hunter would be able to if the time came. However, they’d be wrong, as Gon is capable of murder, but only after one of the ants took something precious from him. This subversion of Gon works so well because it has been established by now that while our hero accepts death in the line of duty, and can even forgive malicious killers (after fighting them), but even he has a breaking point.

And that’s what makes this such a unique and memorable moment for Hunter x Hunter, that Gon, a character as soft and loving as any other shōnen protagonist, can lose himself this much not over general injustice, but personal loss. The closest comparison would be to Dragon Ball‘s Goku when he goes Super Saiyan, but even that is treated as a side effect and it takes less and less effect on Goku over time. The next closest comparison would be to Bleach, but Ichigo is viewed as an opposite to a pure hero, and his berserk moments are him losing to another personality. By contrast, Gon is losing himself to his own rage, to such a degree that I even got upset with him!

During my initial view, I was so distraught that a friend of mine coined the term ‘Gon needs a snickers’ as a way to make me laugh. A character I loved (and still do) managed to be selfish enough to upset me to a level that felt real and personal. If that’s not fantastic writing, I don’t know what is. You don’t see that in anime, especially with a hero like Gon. He is initially portrayed as an indomitable spirit of optimism and purity. When Killua gave up on their friendship, Gon refused to do so. When Kurapika was in the throes of a maddened quest for vengeance of his own, it was Gon who pulled him out. During every conflict, every adversary, Gon was able to show the light within many characters he’s touched. So the fact that Pitou was able to crush someone as full of light and determination as Gon, it stands to reason why this subversion is writing at its greatest. Gon sacrificed everything for vengeance, something that I don’t think many would have thought they’d see from the earlier episodes. During the hunter exam when Hanzo points a weapon at Gon’s forehead, the young hero did not falter. And thanks in large part to the death and destruction he’s witnessed, the world finally broke Gon. This goes beyond his attitude, as the nen pact he creates to defeat Neferpitou is so hate-fueled that it damages him not only mentally, but also in a physical way. Giving viewers a more obvious sign of what he has done to himself.

Gon is an amazing person, and someone I and many others love to root for when watching Hunter x Hunter. But in peering deep into the abyss, the abyss looked back into Gon and showed us even the most innocent person could snap and become a monster. Which is the genius of Gon’s subversion of the typical shōnen protagonist. His loss of that innocence was perfectly in character with his personality, and he was able to come back from it, showing us what a truly well-designed character he is. Gon is flawed but ultimately is still good. This complexity is what makes the character and the show so special.