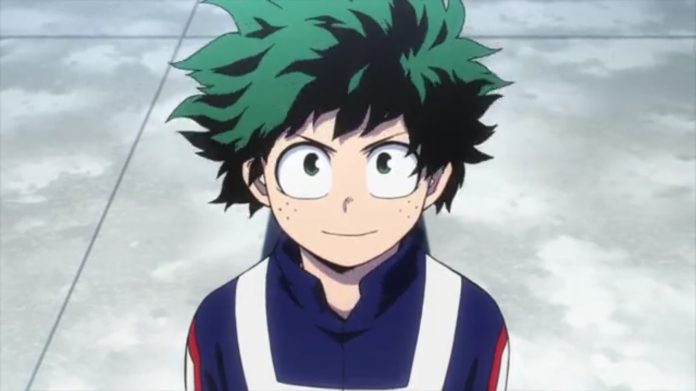 I couldn’t be happier with the fans of Toonami. Previously, I’ve been asked to bring up this topic, and I feel now is the time to strike when the iron is hot. The “My Hero Academia on Toonami” train is at full speed, and I want to get more fans to join this bandwagon until we hit critical mass. Those who follow me know I’m a huge fan of this series, and believe it to be one of the best shows available for Toonami. It has everything that the executives would want in a show as well as the entertainment fans crave. So it’s time to talk about it; let’s get My Hero Academia on Toonami.

Usually, I wouldn’t go as all-in as I have for My Hero Academia. I’ll suggest shows in my editorials if that’s the topic (like predicting the next series to join Toonami), but I try to stay away from pushing one particular show. I have a lot of confidence in My Hero Academia, and I’m willing to put myself out there to help get this series on the block. It has action; it has superheroes, and it has emotional moments that tug at your heart. This series would be a great addition to the block, and one that others also would appreciate watching.

#ToonamiPanel: My Hero Academia and Fairy Tail are top 2 shows. Super and JoJo still get requested and of One Punch Man 2

What has changed that compelled me to write about My Hero Academia and Toonami? Honestly, it was the fans. According to Toonami at their recent panel in Atlanta (MomoCon), they revealed that this series is one of the most requested shows for them to air. That’s huge! That’s something I didn’t expect. I have been asked about the state of My Hero Academia and if it has a shot on Toonami, to which I just wasn’t sure. There are a ton of exciting and fantastic action anime, so it’s difficult to set one ahead of everything else. Unlike fans, Toonami executives cannot keep track of every new series that airs in Japan. Which is why they rely on fan suggestions more than some would expect. So for Toonami to notice, the fans had to have pushed for it. For the past “how many” months My Hero Academia has done a lot to garner attention from fans to get this kind of consideration.

It shouldn’t be a surprise that My Hero Academia has been suggested, considering it has become one of the better action shonen to come out of Japan in recent years. It has set itself apart, thanks to the manga series that’s running in Weekly Shonen Jump, and its massive popularity. As I describe it to those who aren’t into anime (or haven’t heard of the series), it’s Marvel (or D.C.) meets anime in a crossover that works to near perfection. You can see the similarities when watching the series, with its art direction, character designs, and overall themes. It isn’t a “typical” anime that might scare viewers who are not into the genre.

We get to follow Izuku Midoriya (AKA Deku) as he goes from being a quirkless child to the successor of the greatest hero on the planet, All Might (his role model). Of course, the first step for Deku to become the heir apparent to All Might is to go to school, and he ends up enrolling into the top hero school in Japan (U.A.). He makes friends with other promising students (potential heroes) and goes through all kinds of trials to reach his goal. Those tests include things such as classes to prove himself or facing real danger against real villains. So far, fans have been shown an exciting and engaging adventure with Deku. It’s been one of the main reasons why this series has become so popular.

This may come as a surprise to some, but while I think this series could turn out great on Toonami, it does have some issues to consider. One issue is how the production committee for My Hero Academia decided to pace its adventure. They decided to go for a slow burn rather than a rapid, fast-paced, action-packed superhero showdown. It moves at a snail’s pace, almost deliberate to a fault. After watching the first season and the second season now, I can easily see the frustration with how slow the first season felt, despite it only being 13 episodes. Not much in those 13 episodes was accomplished (only one true arc was completed). Not every character in Deku’s class had a lot of screen time, and we do not get to see Deku do very much in the first season either. All valid complaints, but because there is a second season, I find the planning of season one acceptable.

I even heard rumors about the second season, and that they only adapt two chapters per episode (that’s nearly One Piece level slow). Some will argue that this series will catch up with the source material at some point so why go so slow now? I get it. Fans want My Hero Academia to showcase all aspects as to why it’s awesome, which includes more action at a faster pace. It can be tough if one episode focuses more on Deku and All Might’s relationship instead of action (and vice versa). It would be more beneficial if every aspect were shown at least a little bit in every episode. But I find this slower pace almost refreshing, because it allows the more dramatic moments to breathe instead of being rushed through.

Related: Seriously, why isn't #MyHeroAcademia on #Toonami yet? pic.twitter.com/b3OOJViiD3

While the first season lacked the action that fans are being treated to in season two, it had more emotional appeal while it built the underdog story of Deku. I feel that made season one memorable. We were able to witness how Deku turned from a weak civilian who cries a lot to a more capable hero, who still cries a lot (Deku does happen to tear up quite often, although I find that more relatable considering where he began). But what made season one fun was that there are a plethora of characters for fans to watch (20 in Deku’s class alone). Getting to learn more about Deku’s classmates and friends like Iida and Uraraka, learning about everyone’s quirks, and the challenges Deku faces in this first season, like proving himself to the staff at U.A. and his peers, was the best parts of season one.

However, now that we entered the Sports Festival arc in season two, the action has ramped up dramatically, and several characters are given a chance to shine more than they did in the first season (simply due to the length of the series). You start to see the personalities and backstories fleshed out, that can help create favorites among fans. Each episode in season two continues to reaffirm why this series is so great and gives more characters battles that are both dramatic and beautiful to watch. What season one lacked, this next season has improved so much so that everyone cannot wait for the next episode. Season two has upped the ante and has left season one in the dust, possibly being looked at as one of the best series of the year.

My Hero Academia brings a little of everything to the table, things that kids who grew up with the Cartoon Network would appreciate. Fans get to see some beautifully animated action sequences (thanks to Studio BONES) that leave the audience in awe. Seeing some of the moves thrown by characters like All Might, Deku, Bakugo, and Todoroki is dazzling to the eyes, which is something a lot of Toonami fans love. My Hero Academia has great animated fights and some that people will rave about. But what makes these battles more memorable is how well this franchise can stir fans’ emotions, such as when Deku completes something nearly impossible in the entrance exam at U.A. or how he handles facing Bakugo (a childhood bully of his) in combat training. You root for Deku; you root for his classmates, you root for good triumphing over evil (something reminiscent to series such as Justice League and Batman Beyond).

What I think should help My Hero Academia join Toonami is that a dub of this series is already available, and FUNimation is releasing that dub at the same time (or close to) that of the subbed simulcast. It would’ve been nice if Toonami could have jumped on this dub as they did with Space Dandy, but it just wasn’t in the cards. And with how Attack on Titan Season Two has performed (thus far) that actually might be for the better. Maybe it would have been too soon to air this on television late at night on Adult Swim, while the die-hard anime fans can stream it at their leisure. I would prefer for Toonami to wait until the second season is over, that way old fans can return to see it and new fans can learn why it was so popular. Despite seeing it already, I’d be more than happy to watch it again, especially with the Toonami “Faithfuls” out there. It wouldn’t lack all the hype— in fact, I think a run on Toonami after the second season ends might rekindle it. Does this mean I believe that it will invigorate the ratings for Toonami? No, in fact, they might drop again. But, I think My Hero Academia has as good a chance as any to attract more viewers.

That’s my pitch for My Hero Academia. I do believe that the action, animation, and themes are all something Toonami fans would want to watch. This series deserves a chance to run on Toonami. The goal for any anime series is for it to air on television, and My Hero Academia could easily take the risk and run with it. It’s fun! It’s a series that I think a lot of fans can feel nostalgic about, especially if they watched superhero shows in the 90’s and 2000’s. Keep requesting it, Toonami fans, because those who haven’t seen it will thank you for it later.

C.J Maffris is an editorial writer for Toonamifaithful.com. He wishes that My Hero Academia was a thing back when Toonami was on Monday through Friday on Cartoon Network. Plus Ultra. Feel free to follow C.J on Twitter to talk all things Toonami @SeaJayMaffris