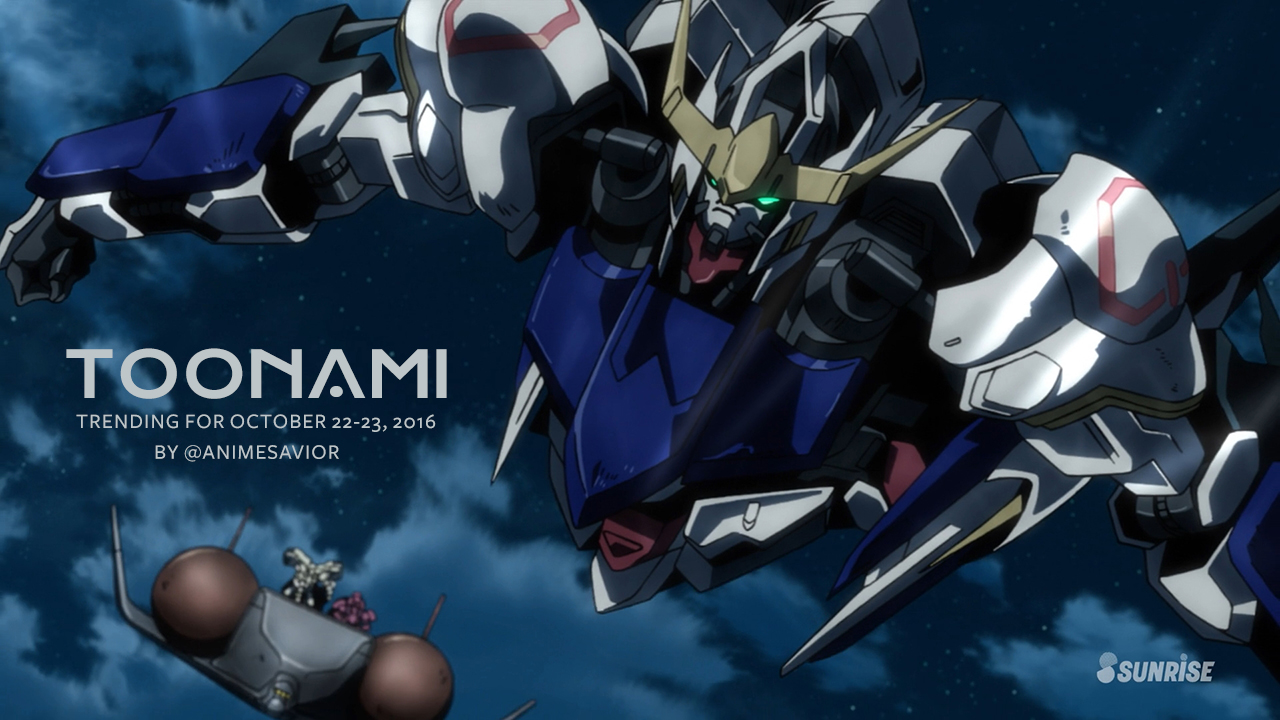 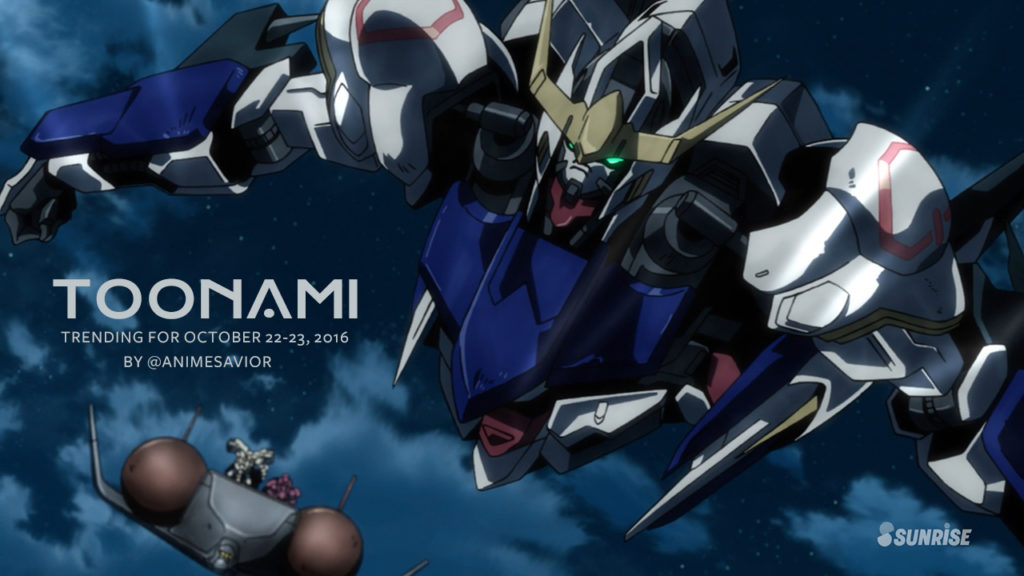 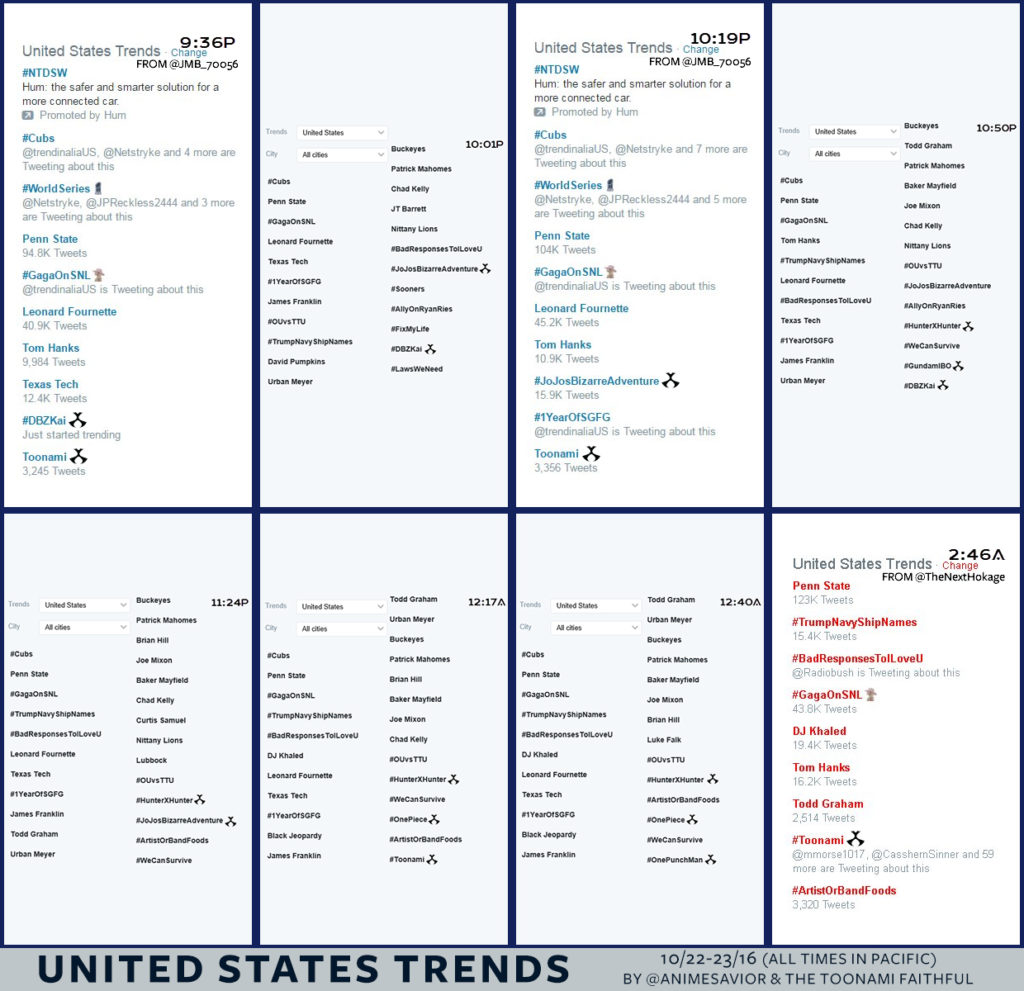 “I’m ready for you to show me  everything that you’re capable of, [Mikazuki]. Your true potential.”

The Toonami Trending Rundown for October 22-23, 2016. Business as usual for the better cartoon show as Toonami all but one show successfully trended in the US during the night, in addition to Toonami trending on tumblr. The only notable downside is that Naruto failed to trend this week, though considering the buzz of the Cubs going to the World Series for the first time since 1945 was occurring at the same time, we’ll take what we can get.

While the fate of DB Super’s dub is still in the air, there is fortunately some progress in regards to bringing the series to US shores, as both Crunchyroll and Daisuki have received the streaming rights to air the subbed version. So for those itching for some more Dragon Ball, you now have a legal way to check out the new series while the wait for the dub continues.

While this doesn’t involve Toonami or its shows per se, Steve Blum as well as many voice actors whose works have been featured on Toonami are presently apart of a labor strike with some of the big video game companies over issues such as the need for a fairer compensation, greater transparency in what they are working on and what is expected of them, and the easing of the intensity of their vocal demands, which if overworked and left unchecked, can and has led to actors straining and even damaging their vocal chords.

Personally, Voice Actors have played a big and quite frankly underrated role in bringing our favorite anime, cartoons, and video games to life, and it’s very doubtful these works would be nearly as enjoyable if it wasn’t for their efforts, and I thank them for that. The health and well-being of all involved can help dearly for the sake of the art and it would be a tragedy if an actor suffer an avoidable event that ruins their ability to voice their characters and inspire others. I do wish both the actors and the developers my support and all the best in hopes for an equitable solution so we can continue enjoying these great games and talents for years to come.

The countdown to Intruder III continues as we’re only just 2 weeks away, but in the meantime, next week is Halloween weekend, so Toonami will be taking a week off from regular festivities, as the previous 7 episodes of Iron Blooded Orphans will be shown. See you again next week and stay golden as always.

Special thanks to @myanimewaifu, @JMB_70056, @TheNextHokage and others I forgot to mention for spotting some of the trends on this list.

The Cresent Moon, Mikazuki. Only Toonami on [adult swim] on Cartoon Network.