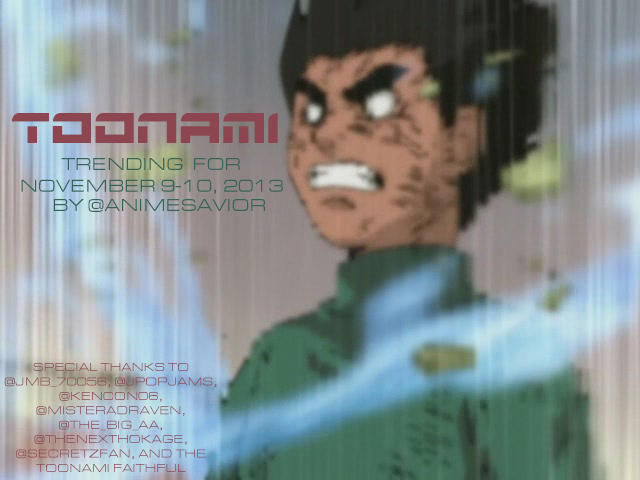 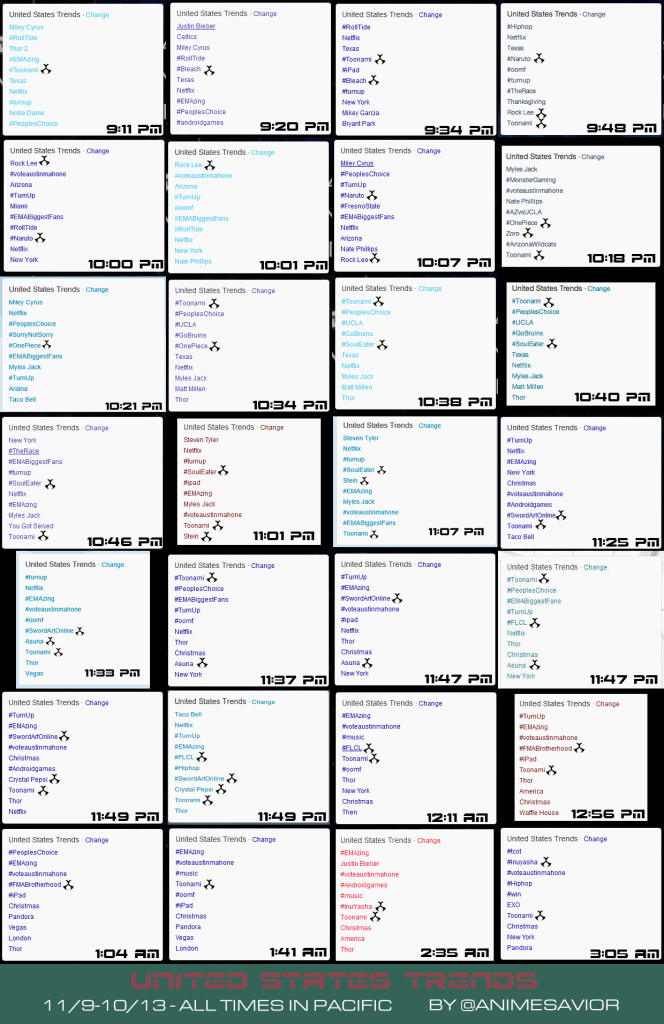 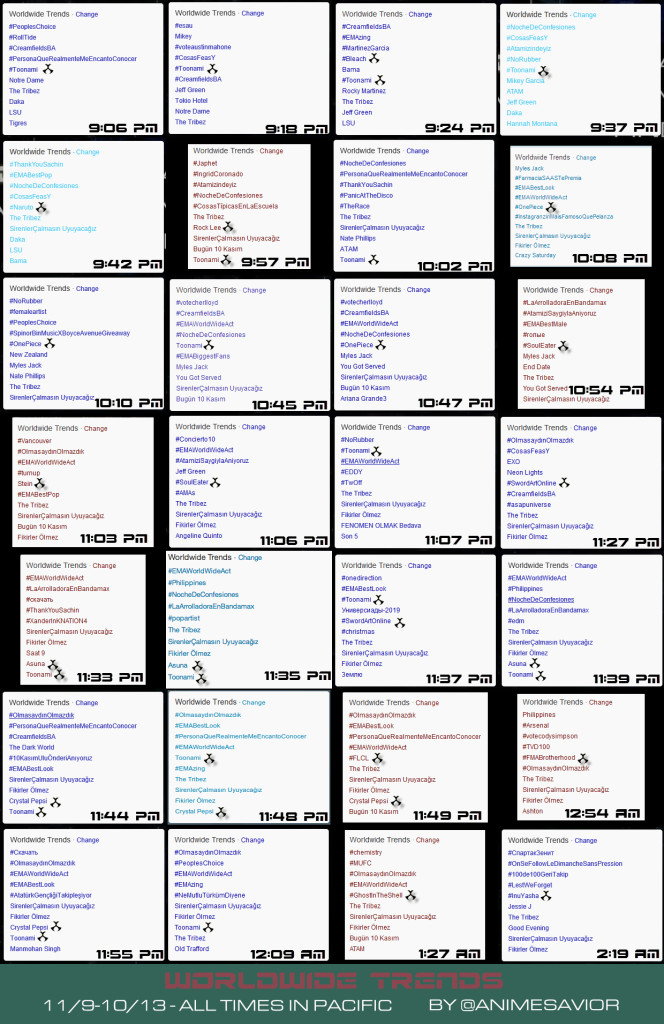 “This technique is even more forbidden than the primary lotus. It is not without danger, but it will be your trump card. But listen, you can only use this technique on one condition, one very strict condition.”

The Toonami Trending Rundown for November 9-10, 2013. Asuna’s unfortunately still stuck in her Nervegear and (virtually) kidnapped so that means we’re kicking off Sword Art Online’s Fairy Dance arc, as every show made the US and Worldwide trending list with the exception of Ghost In the Shell (though that trended Worldwide, but not US), Star Wars TCW, and IGPX (oh, the insult to injury for Jose after witnessing SAO and his negative reaction to it).

We also got a special trend from every show between Naruto and FLCL with Rock Lee (as he ramped up the effort in his battle with Garra in addition to viewers learning about his past), Zoro (as a gang of pirates tried, and failed to kill him), Stein (as the madness begins to completely consume him), Asuna (as she fails to wake up from her Aincrad slumber as Sugo virtually kidnaps her), and Crystal Pepsi (which is a discontinued Pepsi variant which FLCL has referenced numerous times).

If you haven’t heard, we got big Naruto news: On the same week Toonami expands to 11:30pm Eastern and brings in Space Dandy, Naruto Shippuden will make its long awaited debut to the block.  That’s right, the legal red tape that has prevented Shippuden from airing in US airwaves since its Disney XD cancellation is finally off. It will also be uncut too, so those dissatisfied with how Disney handled the show will be glad to know that the show’s in good hands. I’d just like to say that this is just another example that if the revival of Toonami has told us anything, it’s to never give up and nothing is impossible.

Unfortunately, this also means Naruto’s last night will be on November 30 and will be off the schedule during movie month, so if you’re up for binge watching Naruto from where the point where Naruto leaves the schedule to where Shippudden starts, you’ll need to watch from Episodes 54 to 153 (if you want to skip the filler arc) or 220 (if you don’t). Toonami just finished Episode 50 if you’re wondering, so if you’re going to start binge watching now, start there. If you want to binge read the manga instead however, you’ll need to read up to Chapter 245 to get to Shippuden’s starting point.

In Sword Art Online news, the special edition “epilogue” will be out at the end of the year and will stream (subbed) in Crunchyroll. Unfortunately, SAO’s run won’t be finished on Toonami until a month after the fact (two if it gets fully preempted for movie night) so unless you’ve already seen the show subbed, hope you got the extra patience.

Speaking of Sword Art Online, I personally have a few things to say regarding the Fairy Dance arc, but considering it’s length, I’m going ahead and making a full editorial about it along with related issues like “What’s a Toonami show?” and “Why Toonami doesn’t do “otaku pandering”. I got other commitments that could delay it’s completion, but I should have it done sometime before Toonami starts next week. For now, let me know if there’s something I need to know regarding this and all I can say regarding Fairy Dance is keep tuning in and judge the show for yourself.

Tonight’s new promo was a review of Assassin’s Creed IV, which got an AARGH out of 10. Speaking of which, some of you are probably holding out on getting it for the next gen versions, and the PS4’s coming out this Friday, so good luck to those that are gonna camp out or are hoping that their preorder will be fulfilled in time, and the same goes to the potential Xbox One buyers the week after. And as Luffy and co. showed us last night, be careful handling your money when you go get your new console(s).

Other than that, enjoy Veterans Day, and see you again next week. God bless the troops and for those affected by Typhoon Haiyan, our prayers go out to you.

Note: There are reports of #StarWarsTCW trending, however I have not seen a non-tailored screencap to back it up.

AARGH! Only Toonami on [adult swim] on Cartoon Network.