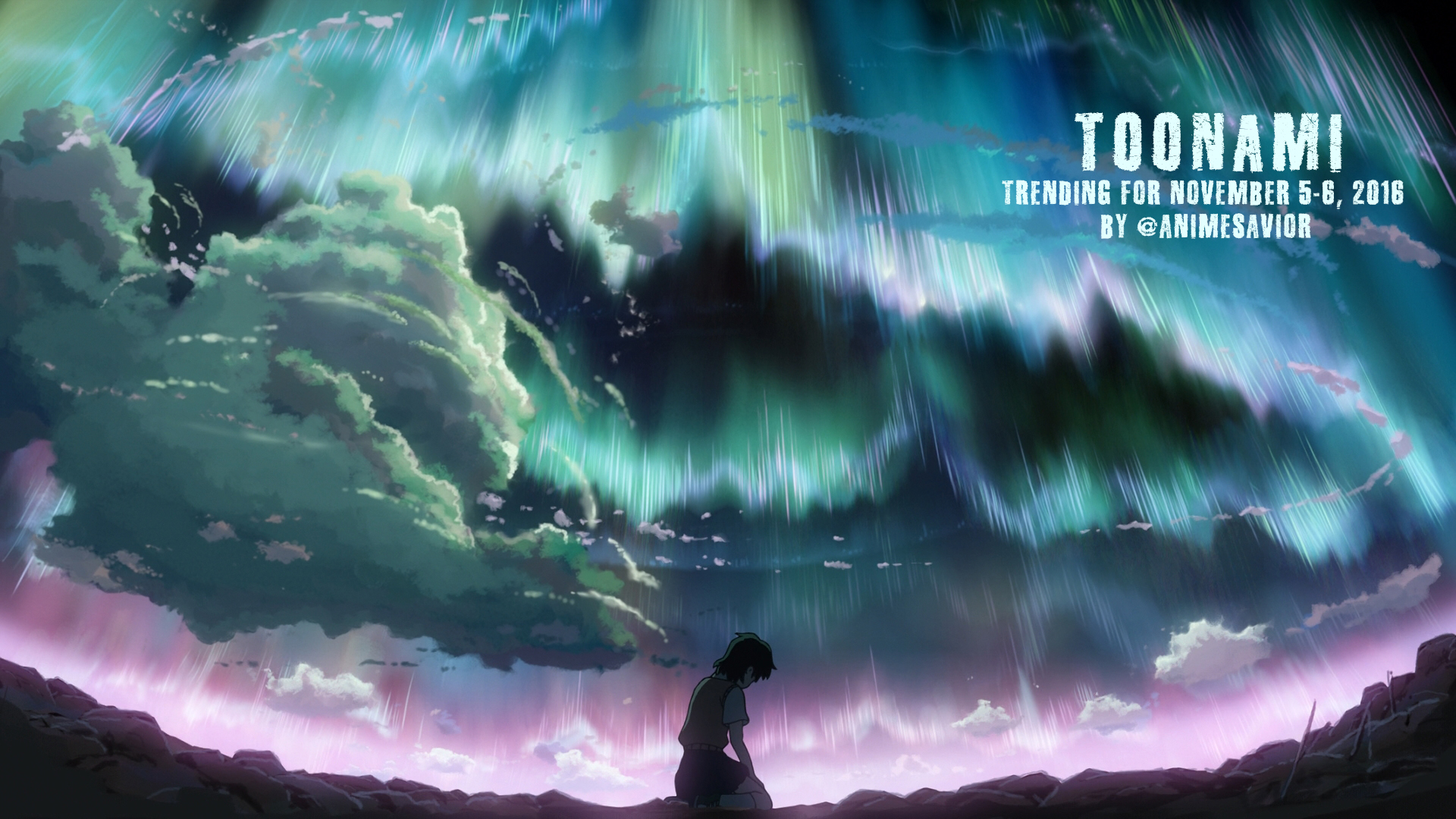 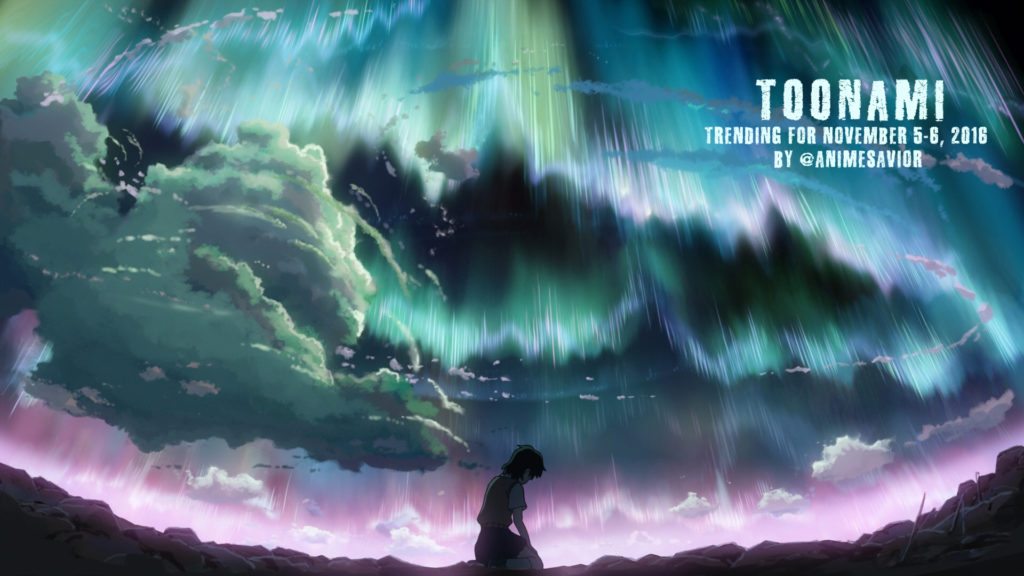 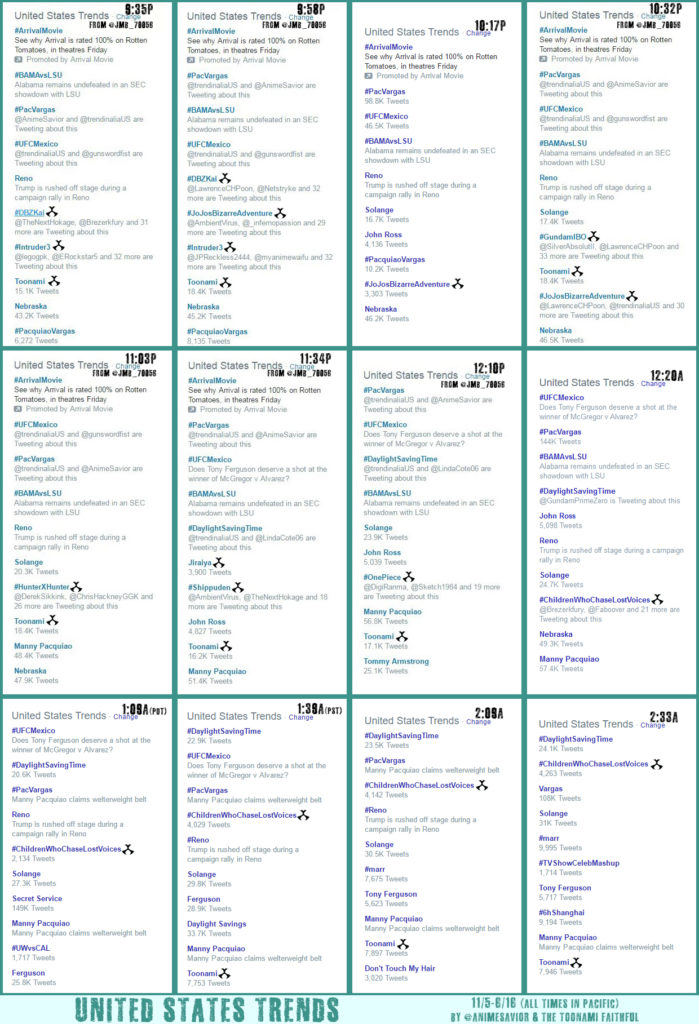 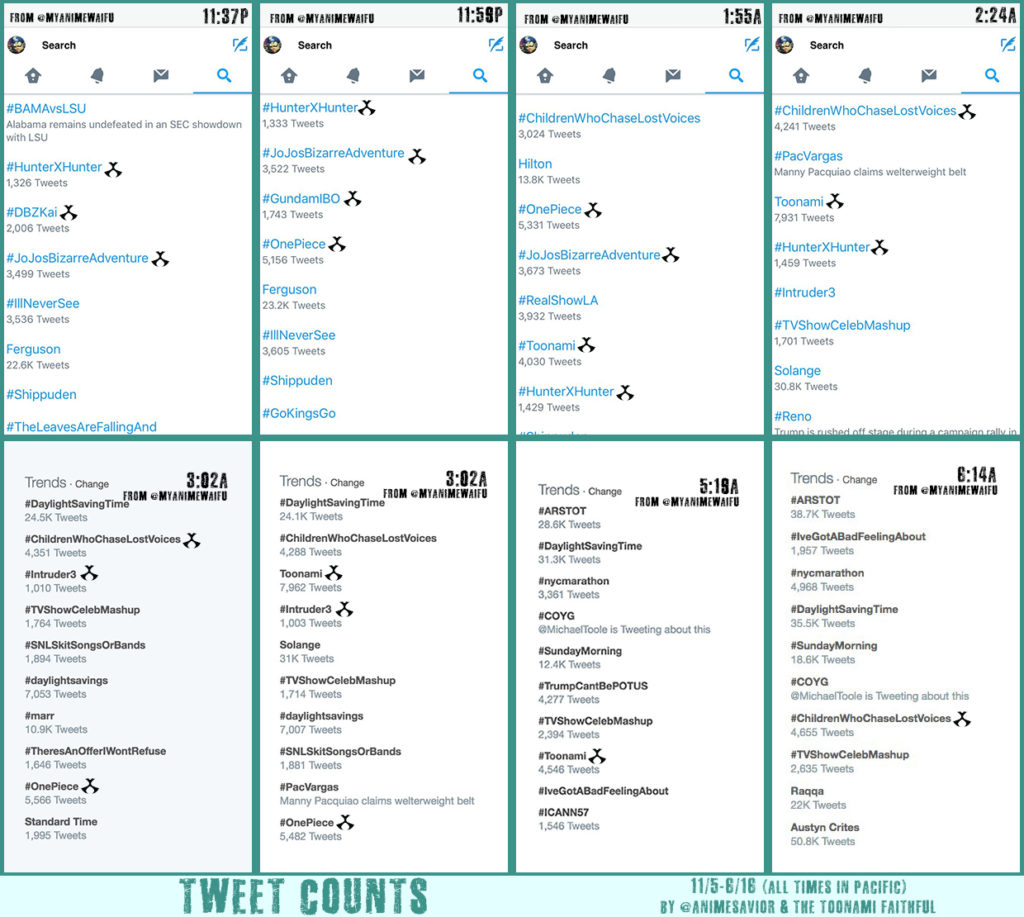 “I heard a voice telling me to keep on living and embrace my loss. You should have the same voice I did. It’s a curse that we humans must bear…”

The Toonami Trending Rundown for November 5-6, 2016. Intruder III begins it’s 4 week run as #IntruderIII and every show had successfully trended during their respective East Coast airings, while Toonami would also trend on tumblr. Naruto would also produce a character trend in Jiraya as Pain mortally wounds and ultimately kills him, but not before Jiraya sends an encrypted message via Fukasaku to the village regarding Pain.

This week’s feature was of course the first episode of Intruder 3. If you missed it or want to see it again, you can check it out below.

In addition, Toonami showcased a special presentation of the Makoto Shinkai feature film Children Who Chase Lost Voices. As a result, the film’s hashtag trended throughout the duration of the airing, and even through the West Coast airing.

Of course, given the current circumstances of why Toonami can’t show many movies nowadays (high acquisition costs and a lack of budget nowadays to air them, especially as movies are only aired once or twice), it may be awhile before another movie will get to air on the better cartoon show. Understandable as the top priority should always be getting big anime shows that are enjoyed by millions at a weekly basis, and with some of these big shows not being cheap acquisitions, trying to have movies as well can be a strain on Toonami’s budget. But as we’ve seen time and again, nothing is really impossible for the better cartoon show and if Toonami, the fans, and the distributors are up for it and can make it happen, perhaps we could possibly see a movie air every now and then in the future. All I can really recommend is to keep watching Toonami and supporting the anime industry overall as always, and whatever happens, happens. Sending Toonami your movie recommendations wouldn’t hurt either.

Great news in regards to DBZ as if you haven’t heard, after over a year of waiting, Funimation has finally received the the dubbing and home video rights for Dragon Ball Super. Of course as the dubbing process begins among other things, the show’s US broadcaster still remains in the air. While we’re pretty much assured Toonami will be interested, as Jason himself has previously mentioned, other networks will be among those bidding for these broadcast rights, especially with a series as highly anticipated as this one, so we just gonna need to wait and see what happens. And again, as with all potential shows, if you want to see Super as well as other Dragon Ball installments like the Buu Saga make it here at some point, keep supporting the block and the industry, and let Toonami and Funimation know.

Tune in next week as Episode 2 of Intruder III is shown, while Hunter x Hunter begins the Heaven’s Arena arc, and Naruto begins the Fated Battle Between Brothers arc, among other great moments. Until next week, congratulations to the Chicago Cubs on winning the World Series and finally breaking their 108 year championship curse and of course while I’ll stay neutral on the Election here, if you’re going to vote on Tuesday, all I’ll say is to choose who you think is best and make your voice heard.