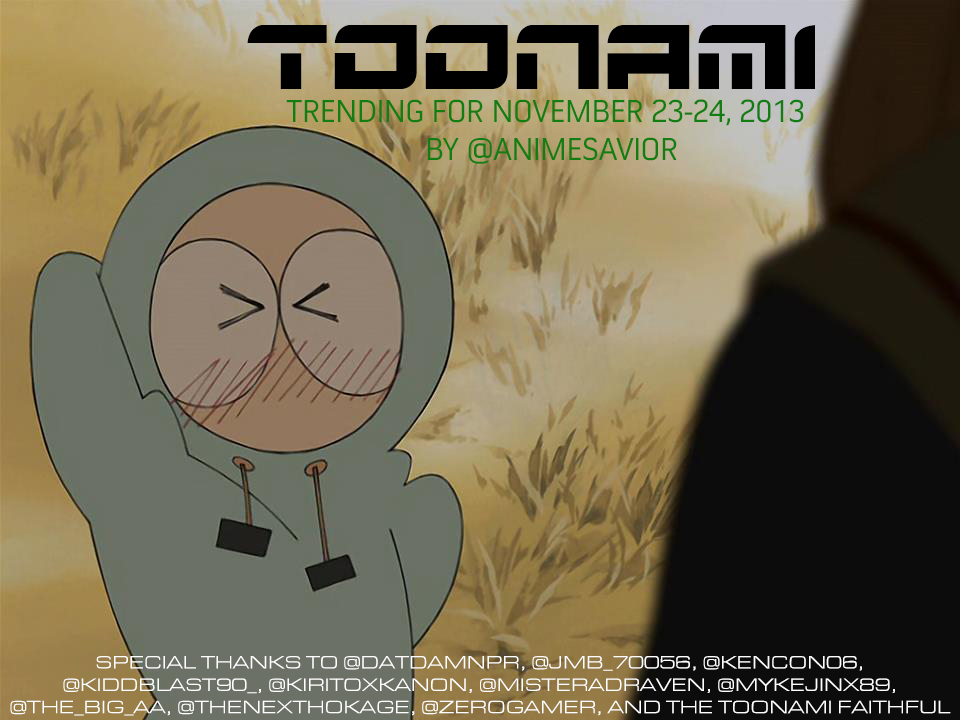 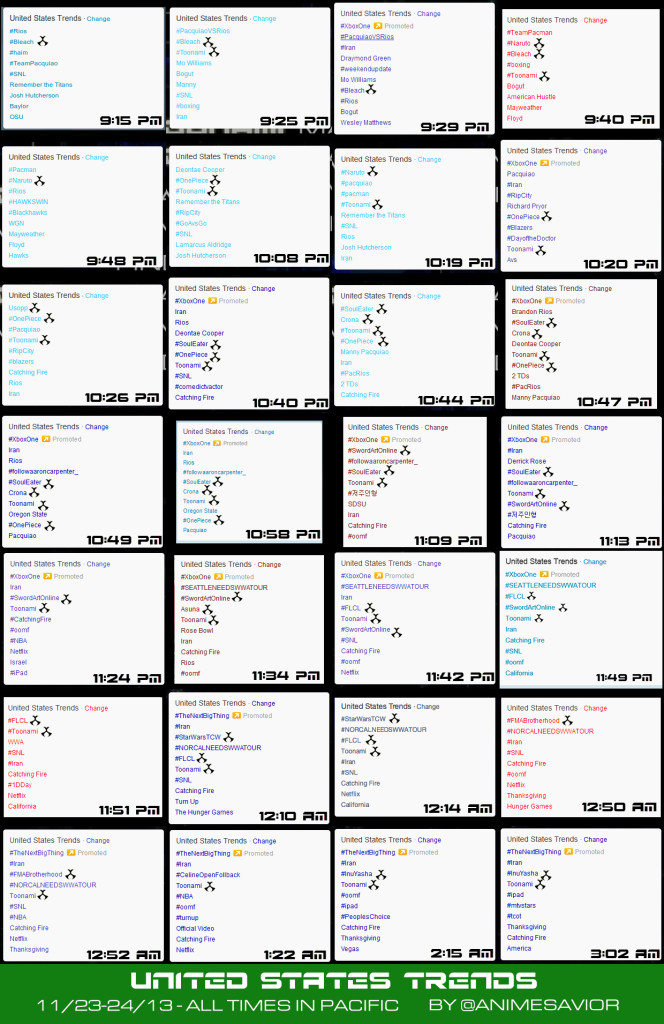 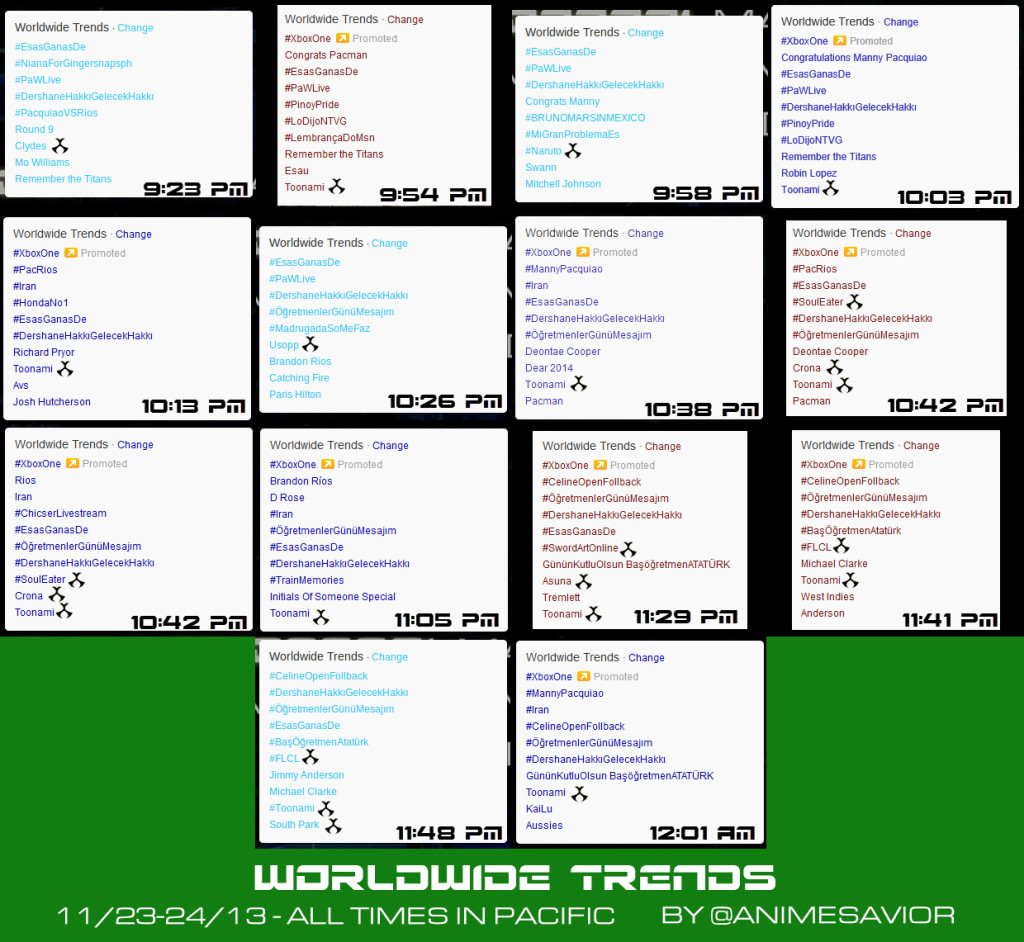 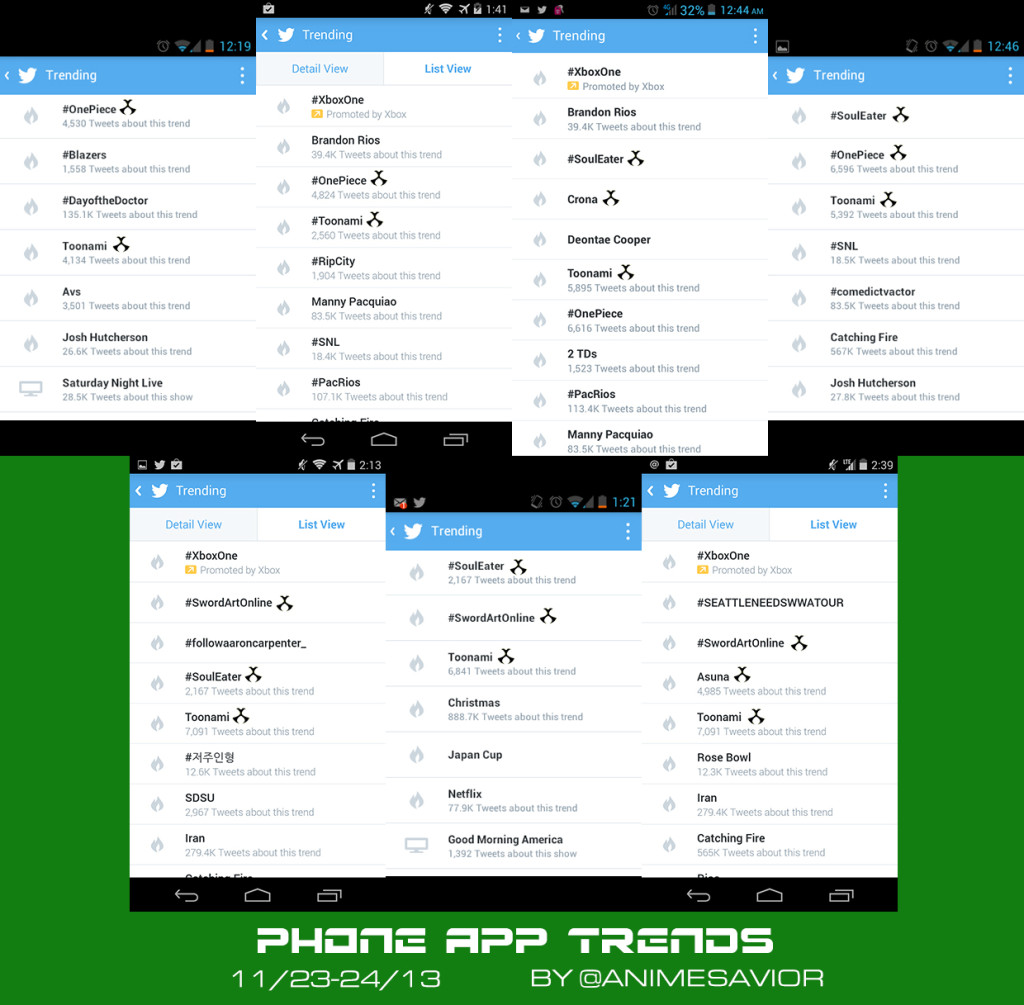 “You’re really too amazing, Takkun. You drink the pulp now, and you do Furi Kuri, and you do Googly Googly and Drooly Drooly. When did you start to change and grow up and everything, Takkun? Is it because of Haru-san, is she changing you?”

The Toonami Trending Rundown for November 23-24, 2013. While the first shots of the 8th Console War have been fired and we had a tough night of trending with Pacquiao’s victory over Rios (his first win since Toonami’s revival, I might add), Toonami had great social media buzz regardless, with every show except for Ghost In The Shell and IGPX trending in the US and Naruto, Soul Eater, Sword Art Online, and FLCL trending worldwide. All I can say is much like Manny Pacquiao himself, the Toonami Faithful sure showed up for their game.

In addition, everything from One Piece to FLCL had something from within the show trend with Usopp (as he tried to get back the Merry’s repair money from the Franky family), Crona (as she tried to run away but fell down a hole and was eventually found by Maka as she fessed up her sins), Asuna (as Sugo, dare I say, “seduced” her), and South Park (as there were a couple scenes in the show that used the South Park art style). In addition, during Bleach, the block showcased the return of the Clydes, and that also trended worldwide.

Why are the Clydes back, you might ask? Well as you may know, Microsoft sponsored much of the block for the night to show off the new Xbox One and some of it’s digs. For those that successfully got one, hope you guys are enjoying it like I am and I’m sure some of you guys used the Xbox One’s TV feature to watch Toonami tonight. And for those still on the fence, I personally do give you my recommendation for it, though for those that want to wait till more games come out, no need to rush. (Not to mention that you’ll probably need to wait due to the launch shortages anyway.)

And hey, love or hate the Xbox One, Toonami needs money to grow, and having sponsors on board can only help our cause (not to mention there’s a reason why people say fansubs have not helped the industry’s financial issues). And don’t worry PS4 users, the block will be reviewing the console soon enough. In terms of the Console Wars, Toonami is neutral territory. I would like to say that the Xbox One trended because of us, but considering that it was the promoted trend during the first half of the block, we can’t really tell there.

If you haven’t heard the news, we have yet another programming announcement: Blue Exorcist will air on Toonami this coming March. It will most likely be SAO’s replacement since it’s finale is expected to end around that time, but it was assumed that SAO would originally replace Eureka 7 but actually replaced ThunderCats, so who knows? Not to mention with the movie month schedule still in the air, I can’t give you an exact date for when that happens. But regardless, with this, Space Dandy, and Naruto Shippuden, the block is primed to get even bigger next year. And who knows what else they have in store.

In trending news: Twitter has implemented a “TV Trending list”, though currently it’s only available for the IOS and Android apps. As you can see by the new “Mobile App Trends” image, it’s still a work in progress (or in technical terms, in Beta), so I’ll figure things out as we go along. But much like the regular trending lists, for those that can spot Toonami programming on the list, mention  @AnimeSavior on Twitter when you post up a screencap so we can mention it on the rundown. Thanks in advance.

Tune in next week as we will have our last “regular schedule” for the rest of the year, with  Naruto finishing it’s uncut run and FLCL showcasing it’s final episode, among others. Have a Happy Thanksgiving and Black Friday, congratulations to those that successfully got their Xbox One consoles, and see you again next week.

Note: #XboxOne was the promoted trend during the first half of the block.

Jump Ahead. Only Toonami on [adult swim] on Cartoon Network.