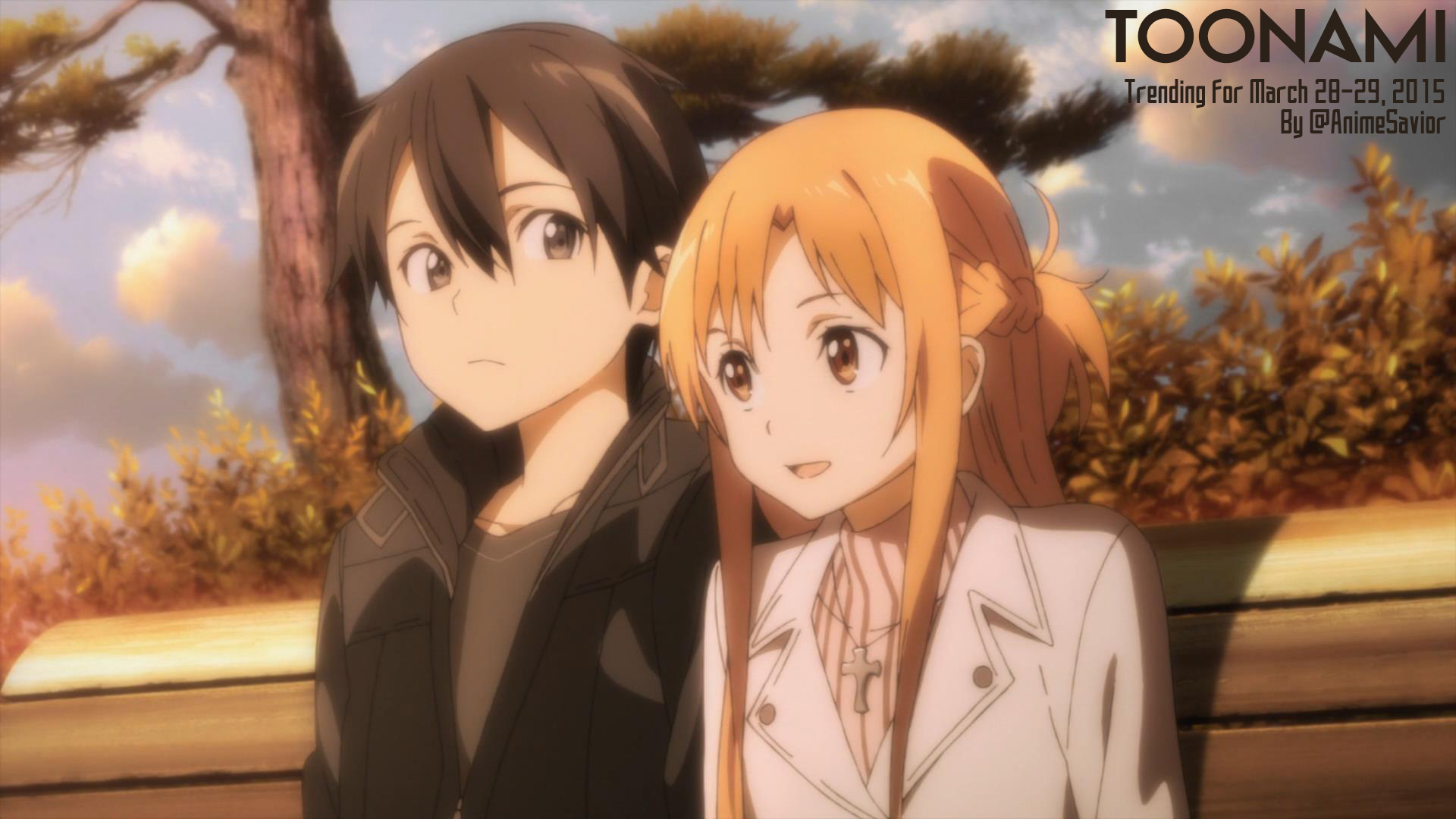 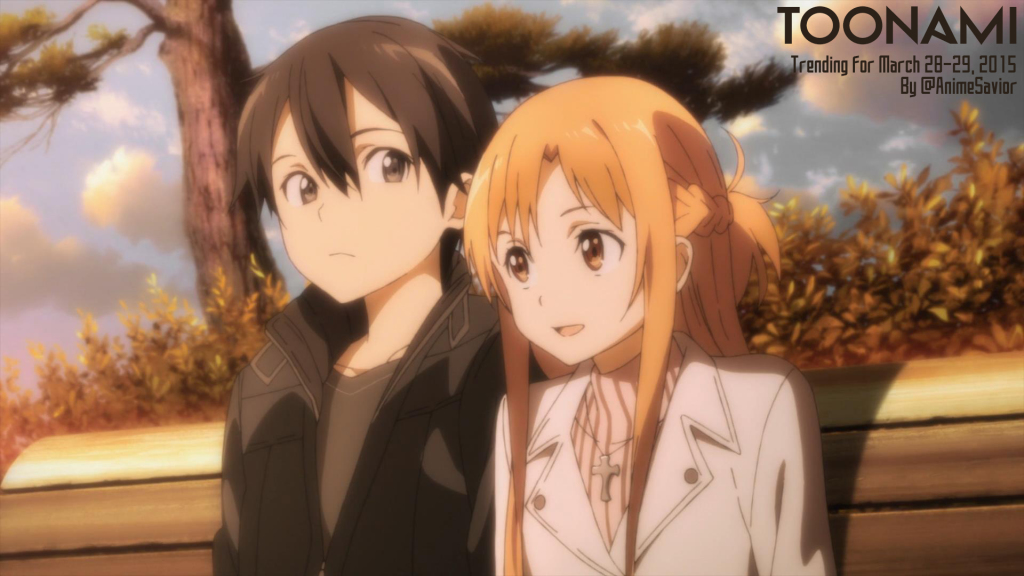 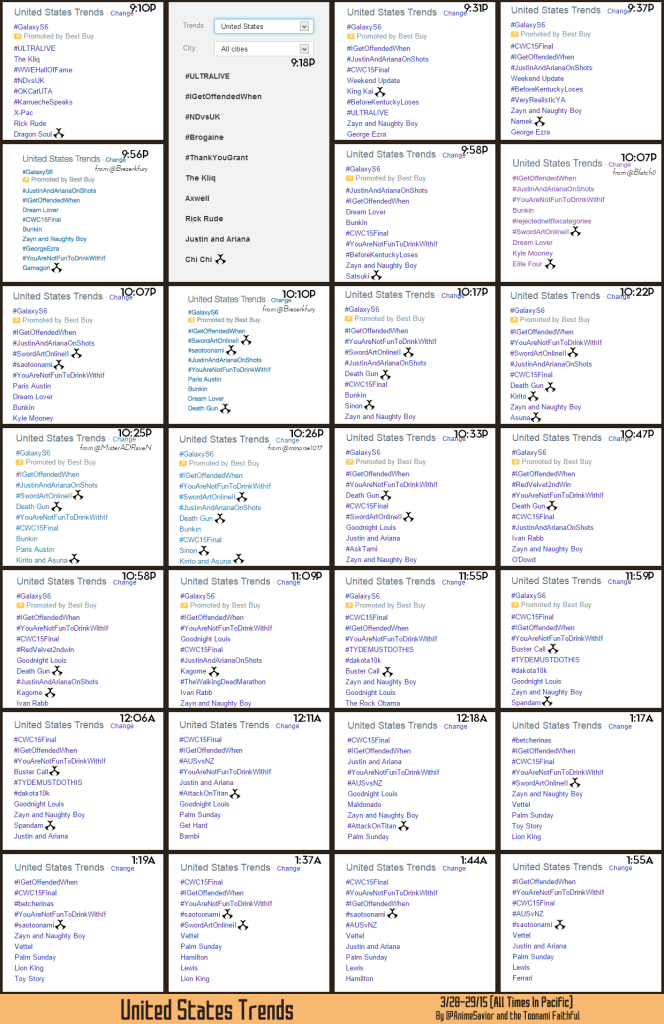 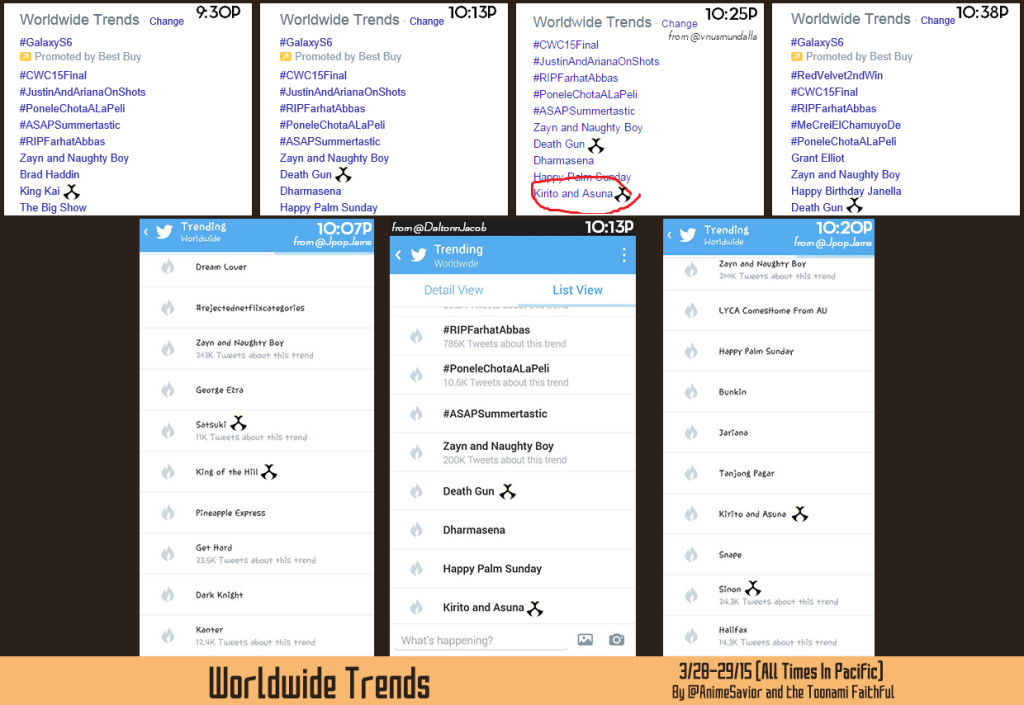 “4000 people died in Aincrad. It’s been a year and finally those memories are starting to fade. But now, more people are dying in another virtual world, and I’m getting pulled back in. It’s like someone doesn’t want me to ever forget.”

“No one show is going to “save” or “kill” Toonami and anyone who says otherwise has absolutely no idea what they are talking about.”

The Toonami Trending Rundown for March 28-29, 2015. To the joys of its fans, and to the dismay of its detractors, Sword Art Online has indeed returned to Toonami as we kick off the Phantom Bullet story arc with a bang. And boy, what a night it was. In terms of shows, both #SwordArtOnline and #AttackOnTitan managed to trend in addition to Aniplex’s designated hashtag #saotoonami. In terms of character and in-show content trends, every show save for Naruto and Attack on Titan managed to produce one, and we got ourselves quite a list this week.

DBZ brought us Dragon Soul (the shows opening theme), Goku (as he stops Krillin from killing Vegeta in hopes of a rematch), Chi Chi (as she is reunited with Gohan, but gives no sympathy to Goku), and King Kai and Namek (as our crew begins their journey to Namek to find a way to revive the Dragon Balls).

Kill la Kill had Satsuki trend (as she calls for a Student Council election in the form of a battle royale), Mako and Gamagori (as Gamagori gives Mako and Ryuko a ride home, but have to deal with clubs in the Battle Royal along the way) and the Elite Four (as Ryuko makes it to the finals with the Elite Four, whom challenge her to a King of the Hill showdown.)

SAO returns with a bang with the trends of Death Gun (as he introduces himself in Gun Gale Online by murdering Xexeed), both Asuna, Kirito, as well as Kirito and Asuna (as they go on a date touring the Tokyo Imperial Palace while reflecting on their days in Aincrad) and Sinon (our newest protagonist to the show, though she didn’t actually appear this week).

InuYasha had Kagome trend as she gets captured by Hitomiko, who is possessed by Naraku, but manages to free herself and Hitomiko thanks to some hidden abilities.

And One Piece had the Buster Call and Spandam (as Spandam inadvertently pushes the snail communicator that calls for a Buster Call on Enies Lobby), as well as Nami (as she struggles to overcome Kalifa’s bubble powers) all trend.

A note regarding this trending rundown:

Some of you might have noticed that lately the trending rundown has been published rather later than usual. This is mainly because I am presently undergoing house renovations, which has taken a lot of the spare time I have, in addition to school and family matters,  so I do apologize for those that may be affected. I will continue to try and post this out as quick as I can, but for those that can’t wait and need an early draft, let me know.

In regards to the elephant in the room of SAO’s mixed acclaim (which for those not in the know, I have made my say in regards back when SAO I completed it’s run, which the point still stands), despite the “civil war” that has erupted in regards to this, surely Reki Kawahara and his crew must be doing something right if it’s popular in both sides of the Pacific, why Season 2 came to be in the first place, and why Toonami and Aniplex brought it back as a headlining show.

Much like what I’ve said about Kill la Kill when it premiered, no one show is gonna simply lead us to the next anime boom, (and in SAO’s case, one show won’t lead to it’s demise either, to say nothing of the irony of why folks say Kill la Kill is Toonami’s “savior” and SAO is Toonami’s “killer” more or less boils down to fanservice), but having many shows of high quality and mass appeal will, and if SAO can live up to it’s expectations, it will certainly help our cause.

If Toonami’s demise did came down to that, what would truly kill Toonami would not be because of SAO, but your lack of support of the block and the anime industry as a whole. So even if you do hate SAO, I do suggest you still support the block regardless, or at least the shows you like. Despite some setbacks, things have been looking up for both Toonami and anime as a whole, and I’m sure we all agree on the well being of Toonami and the industry is good for all of us.

Until next week, have yourself a Happy April Fools day, a great Holy Week, and stay gold.

Think You Can Handle It? Only Toonami on [adult swim] on Cartoon Network.