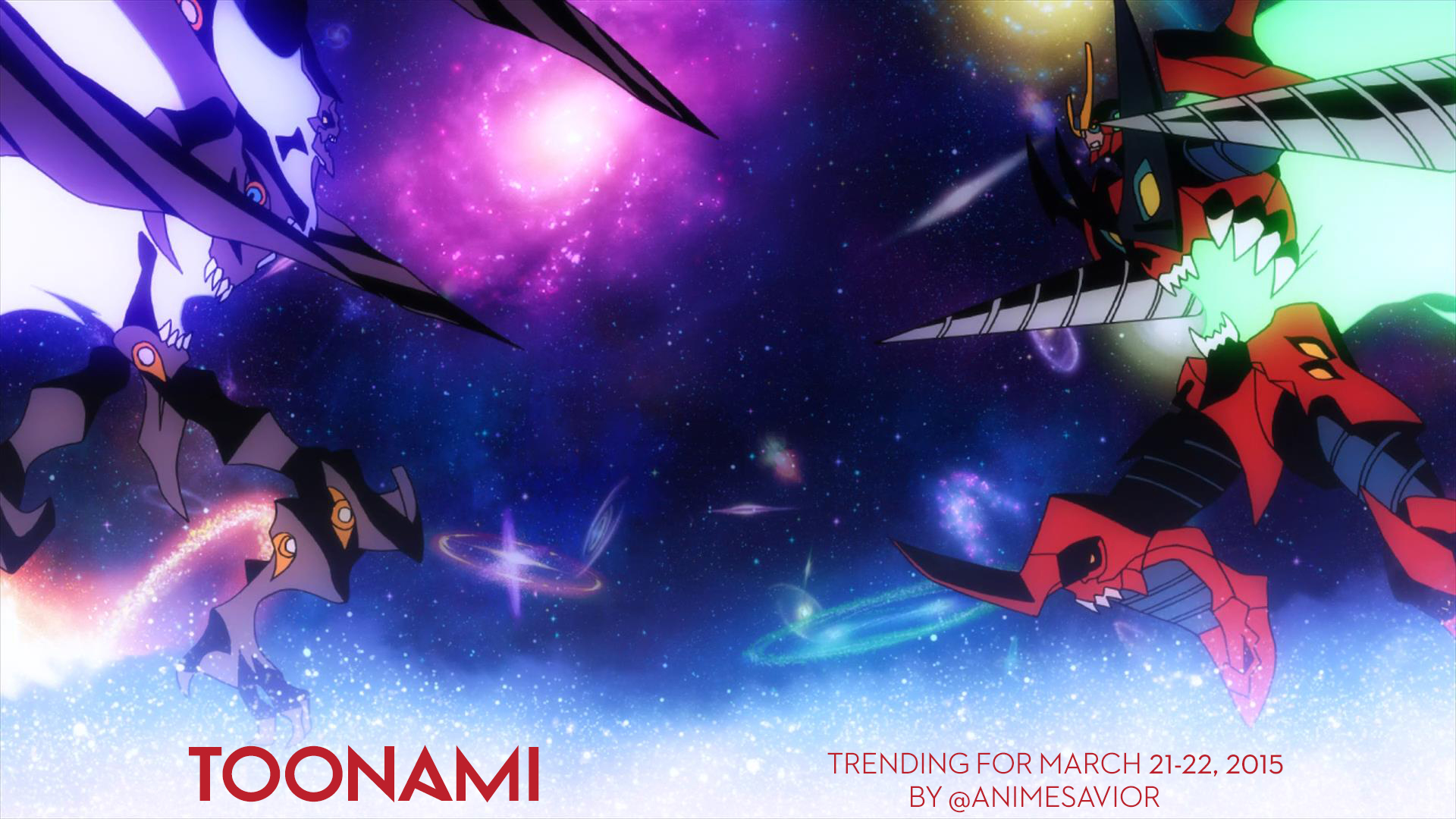 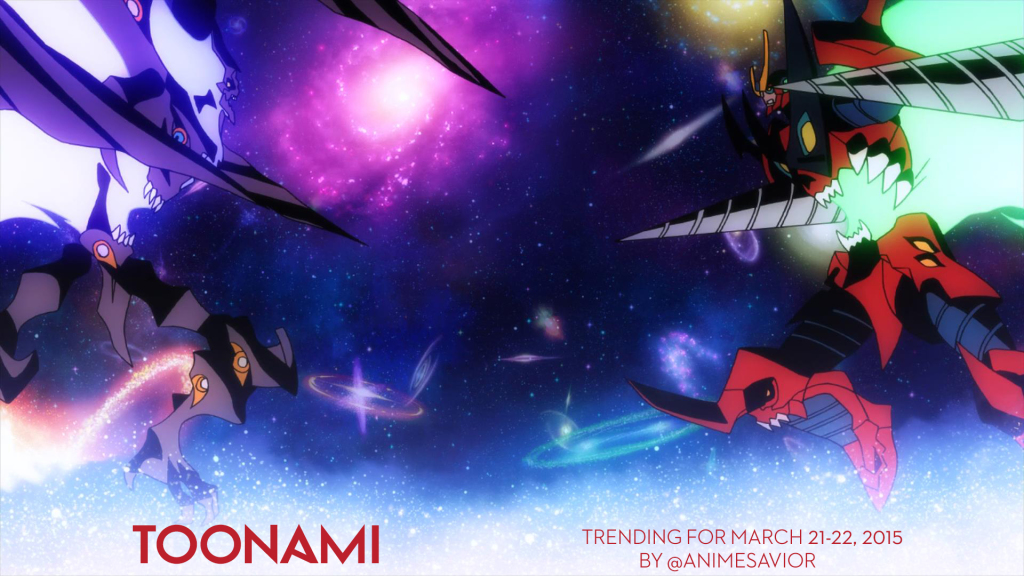 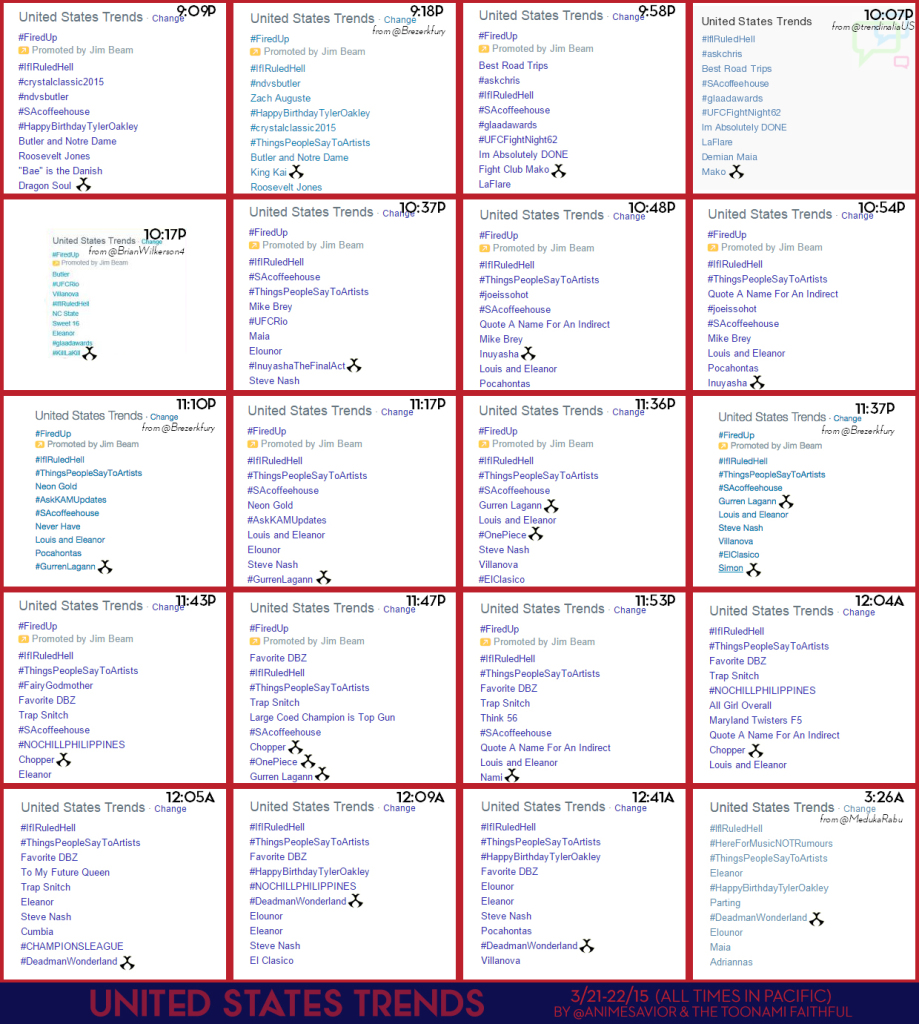 “Mark my words. This drill will open a hole in the universe! And that hole will be a path for those behind us! The dreams of those who have fallen… The hopes of those who will follow! Those two sets of dreams weave together into a double helix, drilling a path towards tomorrow! And that’s Tengen Toppa. That’s Gurren Lagann!! My drill is the drill… THAT CREATES THE HEAVENS!!!”

The Toonami Trending Rundown for March 21-22, 2015. Both Gurren Lagann and Deadman Wonderland end their respective runs with a bang as in terms of shows, every show but DBZ Kai and Naruto Shippuden trended. In addition, Toonami also trended on Tumblr. In terms of character and in-show content trends, every show save for Naruto and Deadman produced at least one.

DBZ brought us Dragon Soul, the OP intro to the show, as well as King Kai, as he mentors Krillin on using the Spirit Bomb on Vegeta, which he ultimately misses. Kill la Kill brings us Mako and Fight Club Mako, as she is given a Goku uniform by Satsuki and is forced to fight Ryuko for her family to continue living the high life, but ultimately learns the adage that money doesn’t always bring happiness. InuYasha had InuYasha trend as Naraku gets Sesshomaru to fight him, but the will of Tetsusaiga makes sure things doesn’t go his way. One Piece brings us Chopper, as he eats his third rumble ball to defeat Kumadori, but goes berserk in the process, as well as Nami, as Kalifa, dare I say, gives her a paralyzing bubble bath. And finally to send Gurren Lagann off on a high note, Simon trends as he finally defeats the Anti-Spiral, marries Nia in her final moments, and walks off into the sunset, passing the torch off to Rossiu and company to continue humanity’s goals.

After 27 weeks of Simon and Team Dai-Gurren aiming for humanity to retake the surface from the Anti-Spiral, Gurren Lagann’s run on Toonami is now in the books. During the shows run, the shows designated hashtag, #GurrenLagann trended in the US and/or Worldwide during 10 different weeks of it’s run as well as during two different occasions beforehand as the show was being promoted. In addition, the misspelled #GurrenLaggan also trended during one occasion. 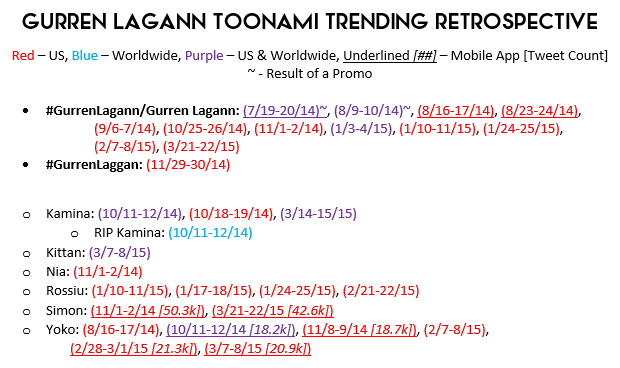 While a continuation of the anime doesn’t seem likely, we do have a consolation prize as the manga is now being released in US shores, so for those that want to see what happens next, go check that out.

Next week brings us the return of Sword Art Online, as we kick off the English dub premiere of Phantom Bullet arc at 1am Eastern, to go along with an encore presentation of Attack on Titan at 3am. Until next week, enjoy March Madness, and stay gold as always.

Link Start. Only Toonami on [adult swim] on Cartoon Network.