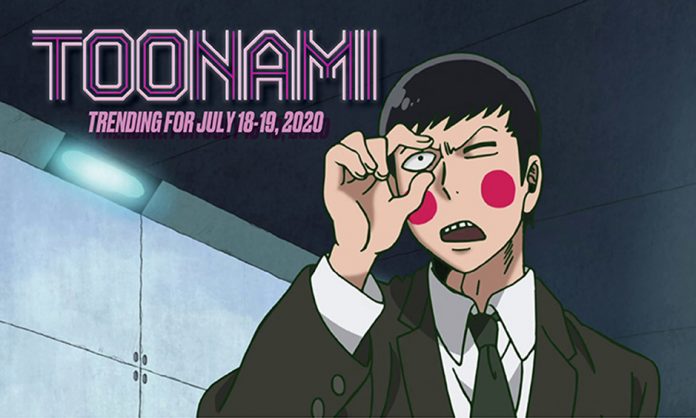 A report on the social media buzz and news from the Toonami broadcasts of July 18-19, 2020.

This week on Toonami, Ballmastrz: 9009 rolled into its second season instead of the return of JoJo’s Bizarre Adventure: Golden Wind that many were anticipating. With the finale for Paranoia Agent looming on the horizon, one question remains: what happens next? Adult Swim Con (July 23-25, 2020) may have the answer. Commercials for the event teased show announcements and sneak-peeks for Toonami original projects like Uzumaki and Blade Runner: Black Lotus. All the more reason to tune in to the Adult Swim Con edition of Toonami this Saturday, July 25!

On July 18-19, #Toonami, #ParanoiaAgent, and #MobPsycho100 trended in the U.S. on Twitter during the east coast runtime. Briefly, #ParanoiaAgent was the sixth trending topic in the Arts & Culture section of Twitter’s Explore page.

Despite the confirmation at FunimationCon that the dub for JoJo’s Bizarre Adventure: Golden Wind is complete, Jason DeMarco tweeted that it may not be ready to air on TV. He answered a fan on Twitter who asked what would be following Ballmastrz: 9009 after the season one finale:

Before the Tournament of Power begins on Dragon Ball Super, Goku teams up with Gohan, Buu, and Hercule to face fighters from the ninth Universe in the Zeno Expo, a martial arts showcase, to teach Future Zeno about the sport. Inspector Maniwa returns in Paranoia Agent, armed with new information about Tsukiko Sagi, her past trauma, and an ancient weapon to wield against a large-and-in-charge Li’l Slugger, who’s been growing in size and strength since Misae Ikari denounced his power over humanity’s darkest emotions and single-handedly defeated him in the previous episode. In Mob Psycho 100, Mob and Teru fight against members of the ESPer terrorist organization Claw as they search for Ritsu and the other kidnapped ESPers. When faced with a vision of his brother in a pool of blood during his fight with Muto, Mob’s rage and sorrow completely unleashes his psychic powers. Mob’s powers used Muto’s ability against him, reversing the traumatic imagery into Muto’s mind instead and causing Muto to fall unconscious. The Black Bulls are reunited in Black Clover, but their hideout is in shambles. At the same time,Henry pieces it back together into the fortress of their dreams, the rest of the crew help Yami track down his magical beasts that escaped from their pen. Ballmastrz: 9009 season two kicks off with the Leptons enjoying a massive winning streak and surge in popularity, but Ace still feels something is missing in his life. He finds joy in the robot “parents” presented to him by Gaz and Babyball until his “parents” attempt to replace his body with robot parts, and Ace is forced to destroy them. Later, Gaz discovers she has contracted the Blab, an STD that manifests as a head on her belly and spews jokes non-stop, just before her appearance on the Obah Wexley show. Gaz avoids complete catastrophe by improvising as a sock puppet ventriloquist, which earns her praise from Obah and the audience. The fight against the Sound Four continues in Naruto: Shippuden, when Shikamaru, Choji, Kiba, and Neji find themselves trapped inside a barrier with the enemy ninja while their physical bodies lie unconscious. Samurai Jack season five continues as Jack flees an assault by the Daughters of Aku, a group of assassins raised and trained to kill him. He manages to kill one of the Daughters, despite being injured, and discovers that the enemy is human rather than robots, like he assumed.

Did you enjoy this week’s Toonami? Let us know by commenting below or directly on our social media. Be sure to follow us on @ToonamiNews on Twitter, and @ToonamiFaithful on Facebook and Instagram. You can listen to the Toonami Faithful podcast on Soundcloud, iTunes, or Spotify for interviews, discussions, and breaking news updates. This week, CJ, Paul, and Caboose, Jr. come together to discuss Black Clover, which is currently airing on Toonami. Listen at the link below or on your podcast platform of choice: