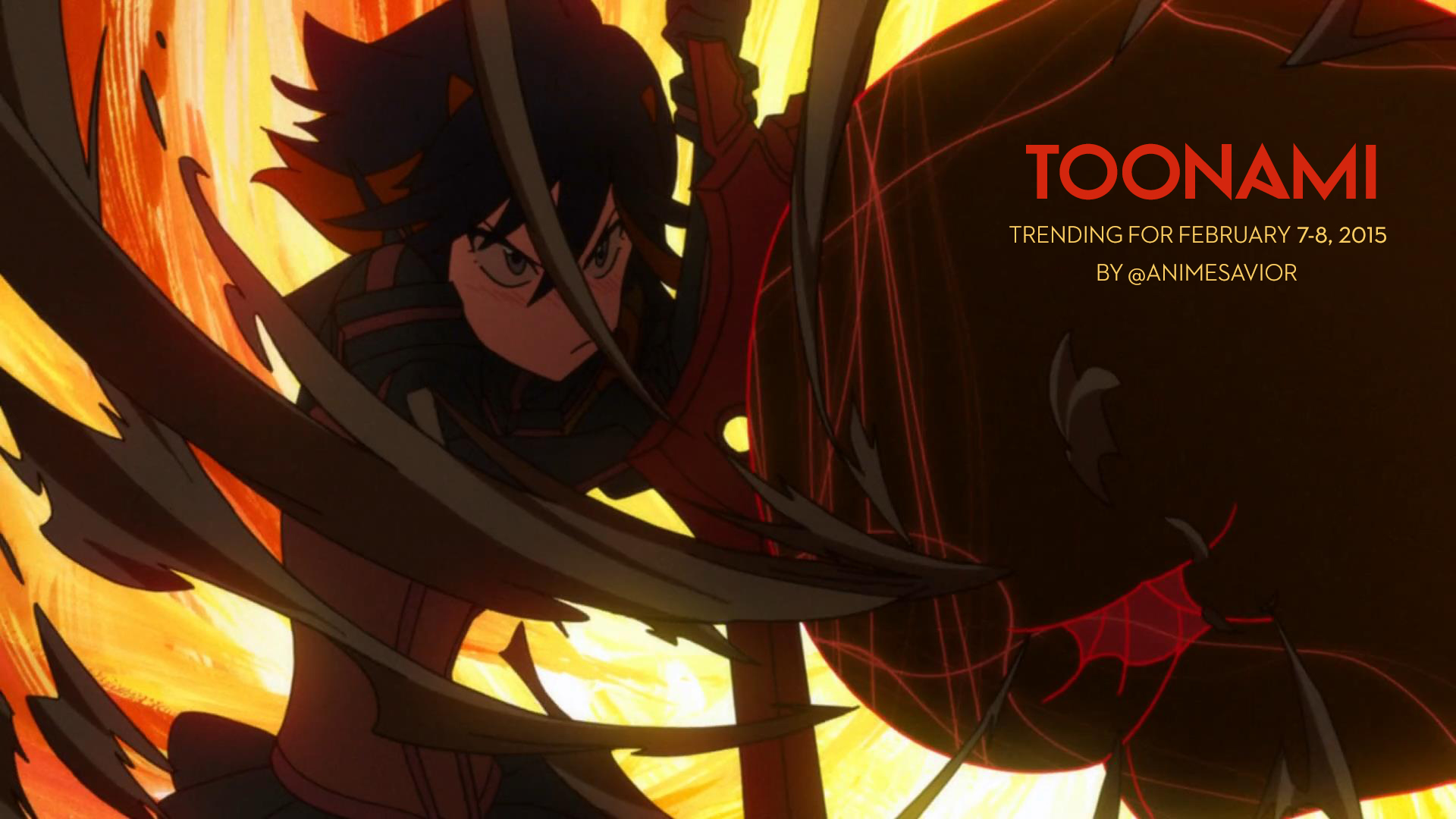 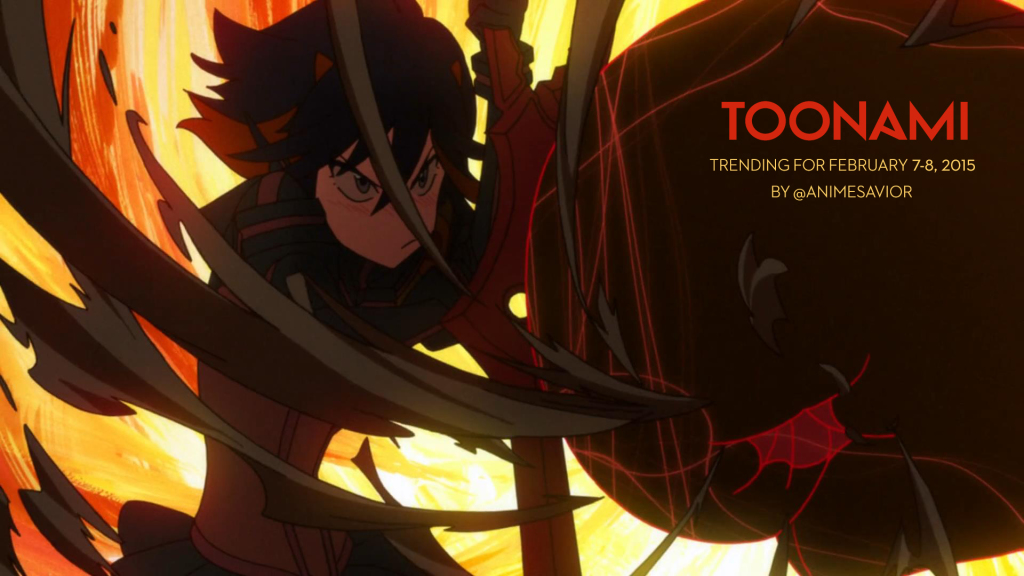 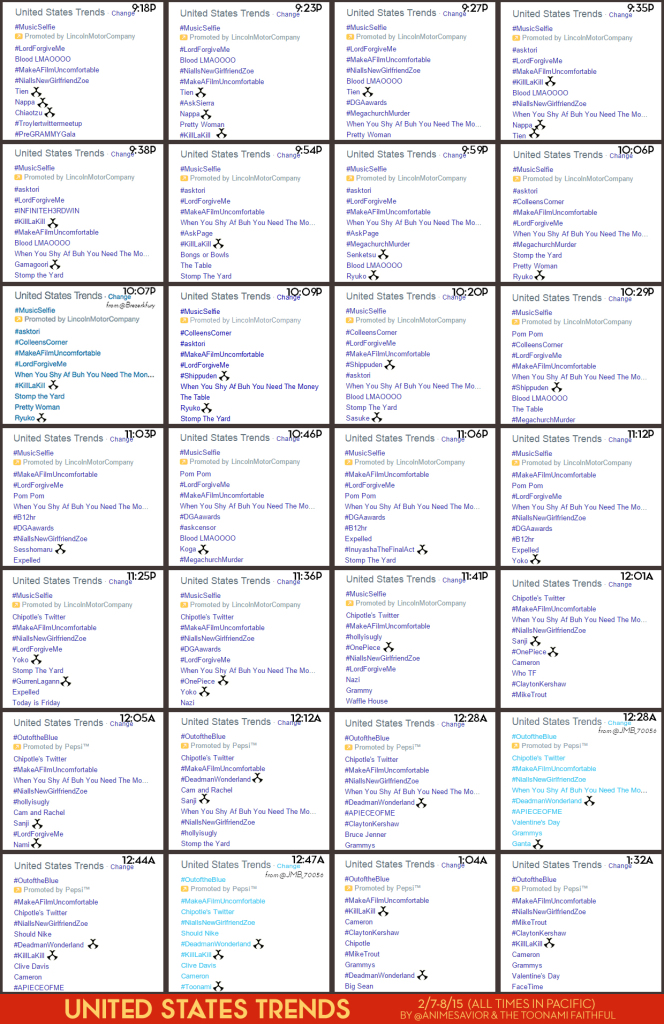 “[This Goku uniform], I got it from my father. […] And are you seeing this scissor blade? It was left behind by the same scumbag that killed him. And now, you’re gonna tell me who this belongs to, Satsuki Kiryuin.”

The Toonami Trending Rundown for February 7-8, 2015. With Toonami being shortened by 3 hours, some may say that things look pretty grim for the block, if not anime as a whole. But with the series premiere of Kill la Kill, among other great moments, you may just be saying otherwise as every Toonami and every show but DBZ Kai reached the US trending lists, not to mention that Kill la Kill also trended during it’s west coast airing, making sure it’s run on Toonami started off on a high note.

In addition, every show on the block each produced a character related trend. DBZ brought us Chiaotzu, who self-destructed in vein to try and destroy Nappa, Tien, as he lost an arm to Nappa and tried to avenge Chiaotzu’s sacrifice, and Nappa, as he barely got no more than a scratch, despite their efforts. Kill la Kill brought us Gamagoori, as he basically enforced Satsuki’s rule over the academy, Ryuko as she confronted Satsuki to find out who really killed her father, and her Goku Uniform Senketsu, as she discovers him to help her achieve her goal. Naruto brought us Sasuke, as he disowned his relationships with Naruto and Sakura in order to team up with Orochimaru to try and defeat Itachi. InuYasha brought us Koga as he copes with the loss of his shards and tries and consoles Kagome and InuYasha, as well as Sesshomaru, as he tries to save Rin from the underworld. Gurren Lagann brought us Yoko, as he we were treated to her days as a schoolteacher, until the Anti-Spiral attacks forced her to rejoin Simon’s crew. One Piece brought us Sanji, as he refused to take down Kalifa due to his rules in Chivalry, as she gets, dare i say, bonded with Kumadori but takes him out with the help of Chopper, and confronts Kalifa to battle her in Sanji’s place. And Deadman brought us Ganta, as he defeated the infamous Minatsuki in a battle of Carnival Corpse.

Really, the only blemish of the night was that DBZ Kai didn’t trend, not to mention that, as Ryuko’s VA Erica Mendez pointed out, neither did Satsuki.

Much like Attack on Titan and Sword Art Online before, there are high hopes for Kill la Kill’s run, some even going as far as saying that Kill la Kill will “save” Toonami and anime as a whole. Granted, while one show won’t simply start the next anime boom, having many shows of high quality and mass appeal will, and if Kill la Kill can live up to it’s expectations, it will certainly help our cause. (Ironically, I should probably mention that last year, some have said that SAO would kill Toonami as well. Of course since Toonami is still running and SAO 2 is among the most requested shows to eventually air, that was never the case.)

Tune in next week as Naruto begins the Twelve Guardian Ninja arc, among other great moments from the other shows. Until next week, stay golden and don’t lose your way.

Legend: The shows listed are ordered based on their appearance on the schedule. Show trends are listed in bold. The number next to the listed trend represents the highest it trended on the list (not counting the promoted trend), judging only by the images placed in the rundown.

Special thanks to @Brezerkfury, @JMB_70056, and others I forgot to mention for spotting some of the trends on this list.

Big Bang. Only Toonami on [adult swim] on Cartoon Network.