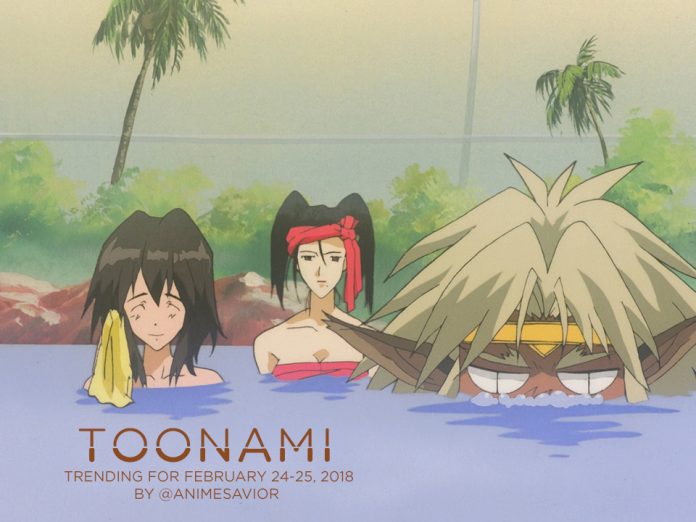 “Let me remind you that we’re here looking for Caster shells, because we have no idea what to expect at the Galactic Leyline, alright?”

The Toonami Trending Rundown for February 24-25, 2018. For many long time Toonami fans, this has been considered a night to remember as among other moments, the Tekkadan vow revenge on Jasley, while Kite, Gon, and Killua feel the wrath of Neferpitou, and the Outlaw Star crew enjoys the hot springs on Planet Tenrei and get some caster shells. The last part is of special mention, as for the first time in Toonami’s history, episode 23 of Outlaw Star has been permitted to air on US airwaves, with the block having a little more leeway with nudity this time around (though some nipples were censored for obvious reasons).

On Twitter, every show from DBZ Kai to Hunter x Hunter as well as Outlaw Star would successfully trend in the US. Meanwhile on Tumblr, Toonami and Hunter x Hunter would both trend. Dragon Ball’s buzz also produced a character trend in Gohan as during Super, Trunks was rather surprised Gohan had settled down from fighting and raising a family with Videl and Pan after last seeing him defeating Cell, while in Kai, he uses the power the Supreme Kai gave him against Buu.

For this week, Toonami showcased a game review for the newest Dragon Ball game in Dragon Ball FighterZ, presently available on all modern gaming platforms except for the Switch. It received an 8.5 out of 10 score.

This trending rundown was posted a week late due to some personal and real life issues on my hand. Apologies for the inconvenience. We’ll have the previous week’s trends up within the coming days, and we’ll see you again on Saturday as always for another round of the better cartoon show.

Special thanks to @myanimewaifu, @mmorse1017, and others I forgot to mention for spotting some of the trends on this list.

Time for that rubber match. Only Toonami on [adult swim] on Cartoon Network.