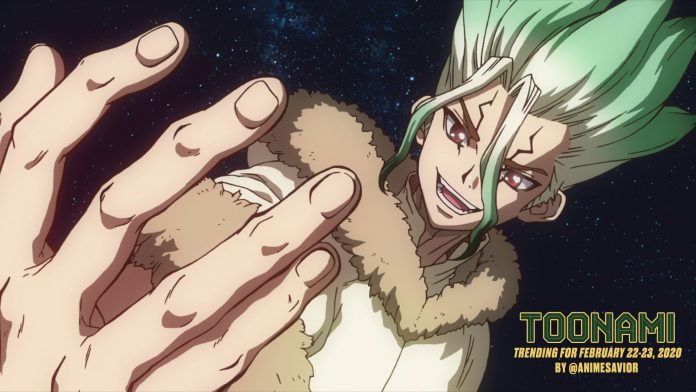 “Looks like you actually did it. You’ve done exactly what you said. On the day we first met, you remember what you told me?  Our home, you’ve made it a Kingdom of Science. And now comes the next part, the Kingdom of Science’s fight with the Tsukasa Empire.”

The Toonami Trending Rundown for Feb. 22-23, 2020. It’s the calm before the storm that will be the Stone Wars, as Dr. Stone’s first season comes to a close.

Dr. Stone ended the season with a bang as Senku and the village complete the cellular phone technology that will allow them to communicate with Taiju and Yuzuriha, who are undercover at Tsukasa’s growing empire. Senku also discovered that his father and the surviving crew aboard the International Space Station left a record in their gravesite. Upon creating a record player, Senku would hear one final message from his father, including Lillian singing a song meant for him. Meanwhile, Sword Art Online saw the beginning of the “Final Load Test” as the wall between the Human Empire and the Dark Territory disintegrated, with Gabriel and the goblins beginning their assault against the humans. Despite being outnumbered and outmatched, Alice and the Integrity Knights are forced to soldier on, setting up a defensive maneuver on a cavern entrance in what they believe to be their best chance to stop them. And Demon Slayer gave us a little backstory of Zenitsu as he tries to regroup with the gang. Zenitsu has had it rough struggling to grow up with rigorous training, which included getting struck by lightning and surviving with a color change in hair. His upbringing has played a role in how he has such a cowardly personality. But his sensei never gave up on him, and it shows when his “other side” comes to the forefront, as a powerful and determined swordsman, which he used to take down one of the spiders.

On Twitter, #Toonami would trend in the United States alongside Dr. Stone, Sword Art Online, Demon Slayer, Food Wars, and Naruto Shippuden. On Tumblr, #Toonami would trend alongside Kimetsu no Yaiba and JoJo’s Bizarre Adventure. The full list, including statistics and tweet counts from the Twitter app and Amr Rahmy’s Fan Screening analytics app, can be seen below.

This week’s feature was a new animated music video titled “In Pursuit of Ghosts” by Max Cooper. You can check it out below.

Adult Swim Games and developer Soleil Games have announced that they are creating a brand-new Samurai Jack video game, titled Samurai Jack: Battle Through Time. According to IGN, the game will be “set before Jack’s final fight with Aku, an evil entity that trapped Jack in alternate timelines throughout human history. Jack will have to fight through several different timelines in order to reach Aku and defeat him.” The game is scheduled to be released on the PS4, Xbox One, PC, and Nintendo Switch sometime in summer 2020.

On Wednesday, Funimation released the newest My Hero Academia film, titled Heroes Rising in theaters, to rave reviews from fans, even trending up to #2 in the U.S. during its premiere night. According to Deadline Hollywood, the film “led yesterday’s box office with $1.7M at 1,275 theaters according to early morning estimates.” If you’re still interested in checking it out, click here to find theaters showing near your area and help support the anime industry on the big screen.

Here’s a rare clip of Deku and Bakugo working TOGETHER! 🙌 And if you think this is crazy, just wait until you see the rest of the movie.

ToonamiFaithful.com released its twelfth interview from Anime Expo 2019, as C.J. Maffris and I spoke with Alex von David, Bryce Papenbrook, Kayli Mills, and Jeff Burns about some of their experiences dubbing Sword Art Online: Alicization. You can check it out below. 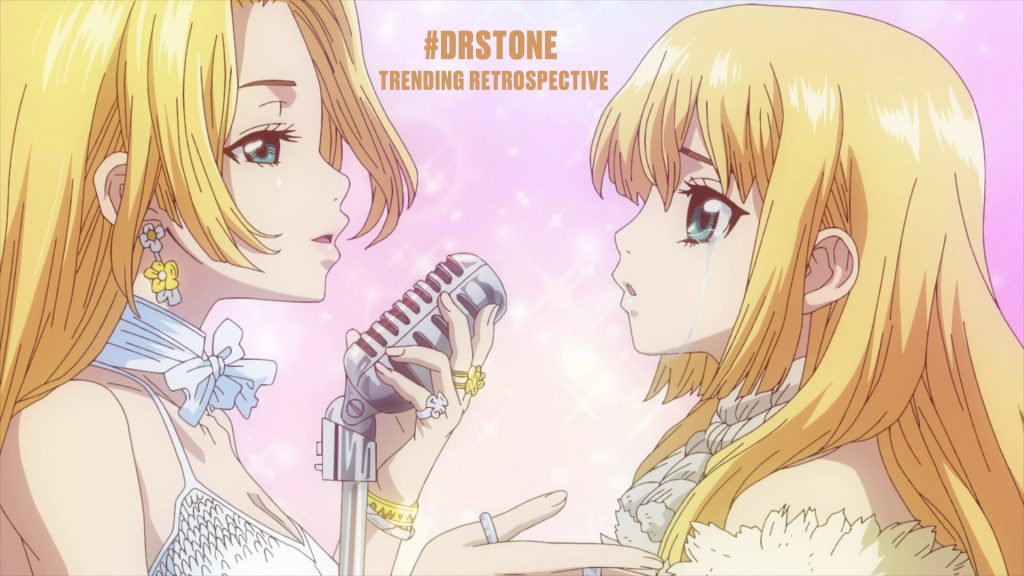 Twenty-four weeks of Senku and friends’ revival and rebuilding of society and Dr. Stone’s first season is now in the books. During the show’s run, the show trended during 22 out of 24 weeks, as well as the New Years’ Week marathon. The full list and statistics can be seen in the image below. 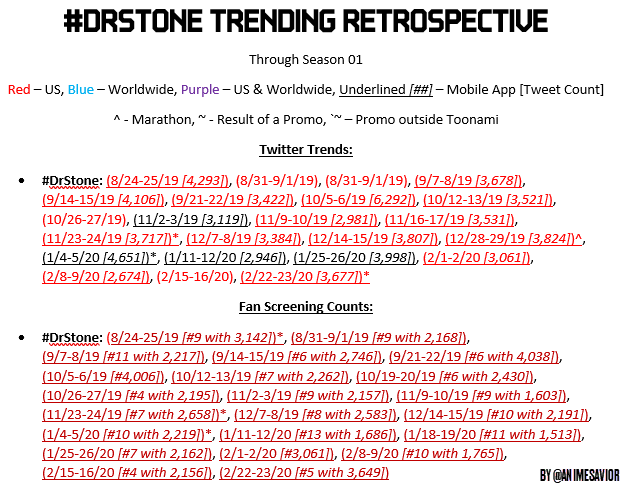 As was mentioned following the broadcast of the season finale in Japan, a second season is already in production by TMS Entertainment. As the sequel’s title suggests, it will focus on the “Stone Wars” story arc in the manga. A premiere date has yet to be announced.

It’s still a bit early to say for sure if Funimation will also SimulDub the new season. Or if Toonami will (or already did) secure the airing rights to the sequels. But if you do wish to see Dr. Stone return to the block, we always recommend to send your show requests to Toonami’s Facebook page, or by directly messaging Jason DeMarco through his Ask.fm page or on his Twitter @Clarknova1. We also recommend letting Funimation and TMS Entertainment know through their respective social media outlets.

Dr. Stone has been a fun and educational ride, as Senku and the gang sought to rebuild society after the petrification stopped humanity for over two millennia. Of course, Tsukasa wants to rebuild society his way, and how the Kingdom of Science can stop him will be one battle fans can’t wait to see.

Unfortunately, much like Fire Force before, Dr. Stone going into its off-season will not come with a replacement series, as Toonami will be completing its 4-week shortening this upcoming Saturday. Toonami for the foreseeable future will now run from 11:30 p.m. – 3 a.m. as My Hero Academia will now start at 11:30 p.m. Naruto Shippuden will now finish the block at 2:30 a.m., and the encore runs of The Promised Neverland and Attack on Titan will be removed from the lineup.

Not much else to say other than see you again next week for another round of the better cartoon show. 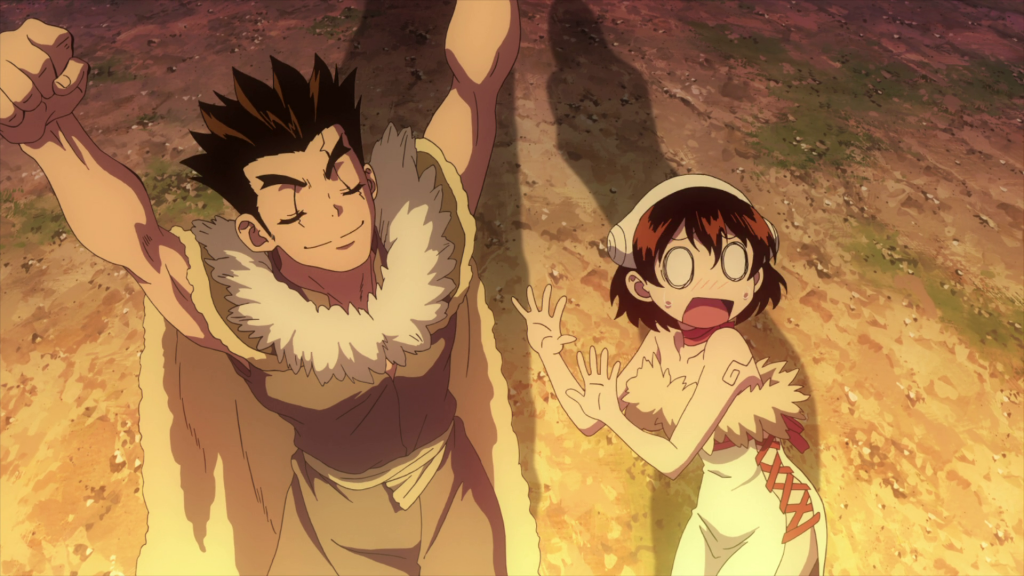