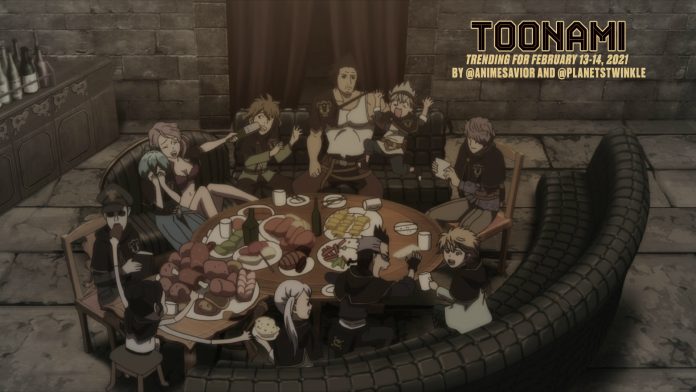 Love was in the air this Valentine’s Day weekend, and not just because of the holiday. Black Clover finally returned to Toonami since it went on hiatus in November 2020. Despite the anime’s end looming on the horizon, fans shared their excitement to see the Black Bulls again, especially for fan-favorite Charmy Pappitson.

The hashtags #Toonami, #AssassinationClassroom, #FireForce, and #SSSSGridman trended at various points throughout the night in the US on Twitter. Later in the evening the phrases “Demon Slayer” and “Demon Slayer Season 2” also trended on Twitter after an announcement for the series.

On Valentine’s Day, AbemaTV hosted a special live stream called Kimetsusai for Demon Slayer’s second anniversary called in place of the in-person event scheduled initially that day at Makuhari Messe in Chiba, Japan. The live stream celebrated the TV anime with the cast and staff and revealed that Ufotable will adapt the Entertainment District arc in the Demon Slayer manga for a new TV anime season later this year. Fans expressed excitement at the news, but many also expressed concern that the new season is a sequel to the film Demon Slayer: Mugen Train, which has not yet been released outside of Japan. Adapting parts of long-running stories into films instead of TV seasons is not uncommon in the anime industry. A recent example of this are the multiple Sailor Moon Eternal movies, which are a continuation of Sailor Moon Crystal’s third season instead of a fourth TV season. When writing this article, Funimation has scheduled the US Mugen Train theatrical release for 2021, so there may still be a chance that fans can see the movie before the new season begins airing in Japan.

The fighters of Universe 2 took center stage in Dragon Ball Super, featuring magical girl-style transformations that Android 17 dares to interrupt with an attack and gets scolded for even by his teammates. Eren launches an attack on Liberio, provoking the War Hammer Titan to fight in Attack On Titan. The Scout Regiment also makes its first appearance since Season Three, outfitted with new uniforms and new weaponry evident of the technological advancements in Paradis. You can find all that and much more in Umeko’s in-depth episode review here.

Assassination Classroom heats up as Koro-sensei, and the rest of Class E defeat the assassin Trigger while on their mission to find the antidote for their ill classmates. At last, they learn the true identity of the mastermind behind the deadly infection: the disgruntled gym teacher for Class E, Akira Takaoka, who was trying to kill Koro-sensei himself. Joker and Benimaru defeat the Holy Sol defenders in Fire Force, and then they find a secret passage that leads to the Nether. Joker also reveals to Benimaru that he used to be a Holy Sol Shadow, an assassin for the Temple, and shares the story of how he escaped their ranks.

The Black Bulls are back in Black Clover, as Charmy decides to train under a master chef to improve her mana-restoring recipes. Her cooking goes awry when she uses extremely rare mana-boosting ingredients, turning the food into giant demons, which Asta and company defeat by eating it. Later, Gordan decides to leave the Black Bulls, feeling like his power level is too weak to be truly helpful to his friends. However, Gordon ends up lost in the woods for three days, crossing paths with a wolf that’s resistant to his magic. While the Black Bulls are out enjoying a heavily discounted feast, Gordon returns home. It’s time for a class trip in SSSS.Gridman, when Yuta’s class goes rafting. However, Akane unleashes her largest Kaiju yet, hoping to draw out Gridman and confirm her suspicions about his identity.

In Naruto: Shippuden, the Four-Tailed Beast Son Goku informs Naruto of the chakra rods lodged within each tailed beast and urges him to free the others by removing them. Naruto succeeds in removing the rod controlling Goku, in the process proving his genuine desire to be friends with the Nine-Tailed Beast Kurama. After a well-deserved rest, Inosuke, Zenitsu, and Tanjiro begin their next mission at Mount Natagumo, where they encounter spider demons manipulating low-rank demon slayers to kill each other. When he learns that the other slayers are overwhelmed, the  Demon Slayer Corps leader dispatches Giyu and Shinobu to assist with the mission.