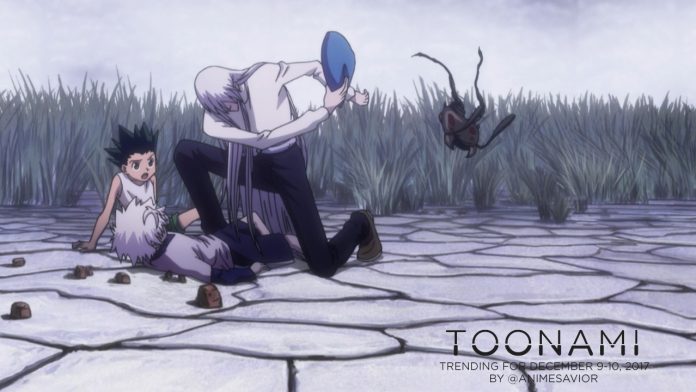 “That was no ordinary ant, it’s a Chimera Ant. An aggressive carnivorous insect that has been designated Quarantine Level 1. They even attack humans from time to time. You boys didn’t realize it, but you were standing in front of their nest. If I didn’t fire the moment I did, an army of Chimera Ants would have consumed the both of you by now.“

The Toonami Trending Rundown for December 9-10, 2017. Hunter x Hunter begins the highly acclaimed Chimera Ant arc as Gon and Killua meet Kite, while Buu’s evil form awakens, and Jotaro has something to say about Dan’s mischef, among other great moments.

This week’s feature was a game review of the critical acclaimed indie run-and-gunner in Cuphead for the Xbox One. It received a 9 out of 10 score.

In addition, during the commercial break of Naruto, Toonami showcased a new music video for Drowned Beast by the garage rock band Oh Sees. You can check it out below

For those wanting to add Gundam Unicorn to their Blu-Ray collections, Sunrise and Nozomi have been working on a Blu-ray set of all 7 episodes of the OVA series. While individual episodes have previously been available as they have been released simultaneously as Japan, this is the first time a boxset of all 7 episodes has been available for purchase. A release date is set for March 2018 and is available for preorder on Rightstuf with a $64.99 MSRP.

And for those who have ordered a Toonami themed Adult Swim Box, we have received word that orders have begun shipping out beginning this week. There’s still a limited amount remaining, so if you’re interested, Adult Swim is still accepting orders at adultswimbox.com.

Until next week, we wish everyone a Happy Hanukkah, congratulations to Toronto FC on winning the MLS Cup, and stay gold as always.

Special thanks to @mmorse1017, @myanimewaifu, and others I forgot to mention for spotting some of the trends on this list.

Runnin’ with the devil. Only Toonami on [adult swim] on Cartoon Network.