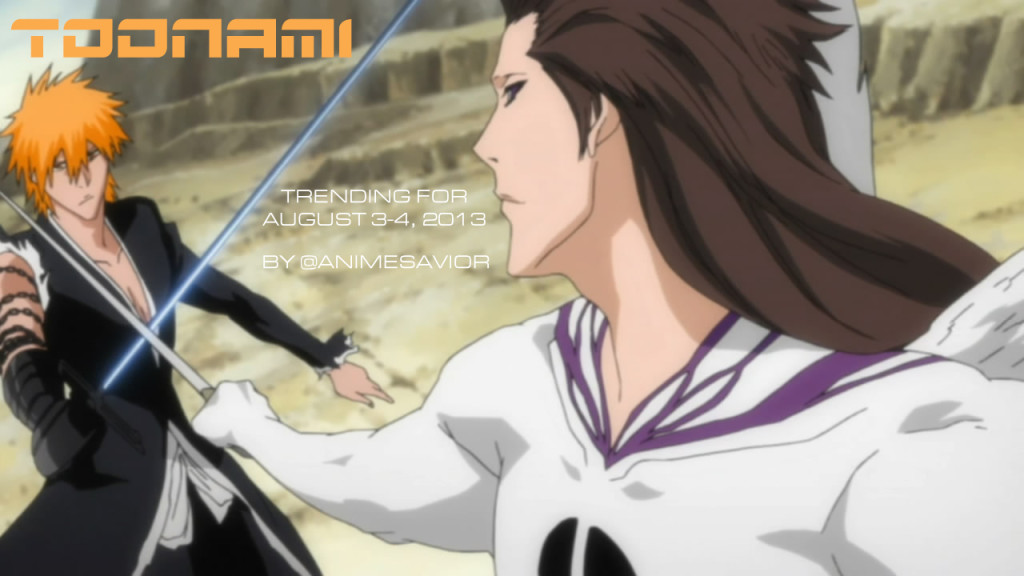 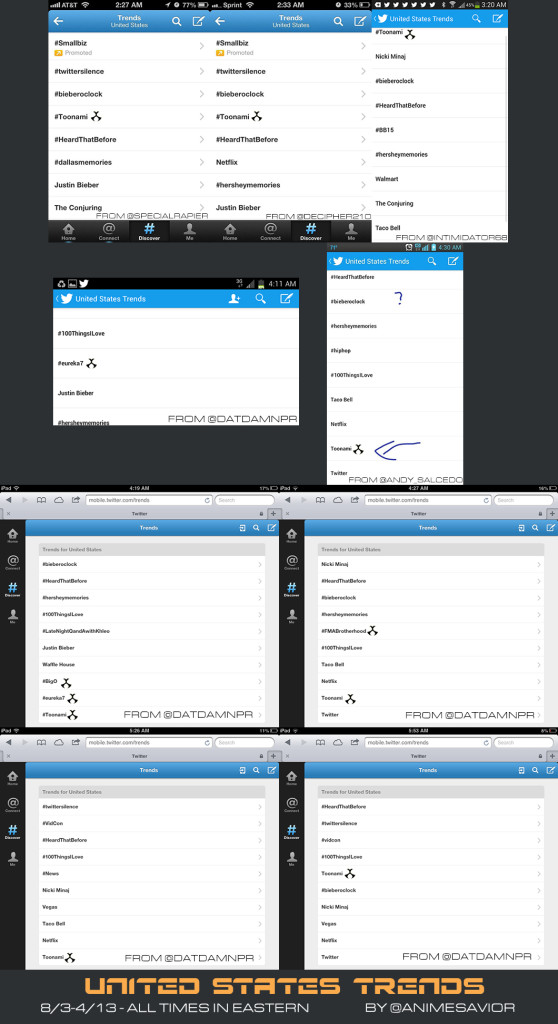 “Aizen. Let’s end this already. All this rambling you do. We’ll, I’m sick of it. So prepare yourself. I’ll show you my final Getsuga Tenshou.”

The Toonami Trending Rundown for August 3-4, 2013. Unfortunately, unlike last week, Twitter wasn’t very nice to us as the trending list practically froze up shortly after Bleach began and didn’t change much, if at all throughout the night (and let’s not even get started about the completion with  the buzz of Justin Bieber and UFC 163, which may have contributed to Twitter crashing), meaning that we can’t really gage this week’s social media buzz. Unfortunate, considering that Bleach, One Piece, and Eureka 7 all had some dramatic climaxes to their respective seasons/series, not to mention SAO and the 2nd half of IGPX were just heating up. Fortunately, a couple mobile app lists weren’t as frozen as the web equivalent was, so we were able to see some trends there.

In related news, Toonami reviewed the Metal Gear Solid Legacy Collection and give it a 9.5 out of 10, and Otakon also advertised the upcoming con during the block. But in short, I can’t say much regarding tonight other than Takeshi wasn’t the only one to have mechanical problems. And no, unlike the newbies, we won’t blame the SAO beta testers on this. We can only hope however that the block’s Nielsen families didn’t have similar issues.

Hopefully we’ll have some better luck next week as far as trending is concerned, as we’ll have the final episode of Eureka 7 in addition to the season finale of One Piece’s Long Ring Long arc, to say nothing about the big moments from all the other shows. And if you haven’t heard the news, we now know what’s replacing Eureka 7 the week after: Star Wars Clone Wars (the CGI version). We’ll also have our 2nd movie night since the block’s revival with Evangelion 2.22 airing on August 31. On a bonus note, although this doesn’t involve Toonami at the moment, after several delays, the new Sailor Moon series will be coming around December 2013-January 2014 and it will also be a complete reboot of the series.

One last thing, to improve the efforts and the quality of this rundown, from this point on, I will be teaming up with ToonamiFaithful.com to lead their trending reporting efforts. Things will stay the same for the most part, but I will be handling the @ToonamiNews account to report trends and to post the rundown on their website. We’re hoping that this partnership will help improve everyone’s tweeting experiences as the tweetstorms continue on and get bigger every Saturday.

Note: There was also a report of Bleach trending in the US, however I have not seen a non-tailored trend screencap to back it up.

Special thanks to @SlayerRapier, @Decipher210, @Intimidator68, @DatDamnPR, @Andy_Salcedo, and others i forgot to mention for spotting the trends on this list.

SNAAAAAAKE!!! Only Toonami on [adult swim] on Cartoon Network.