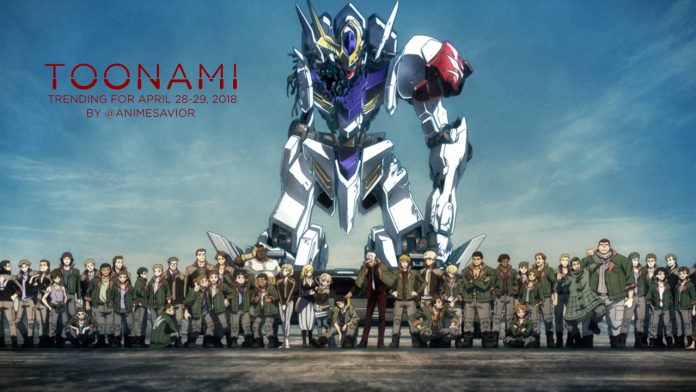 “No matter how far we are, even if we never see each other again, every one of us is walking forward, trying to reach the light. We must keep walking. In my heart, i believe that is our duty for the family members who gave their lives in the hopes that we would find happiness. […] Even if it will be forgotten with the passage of time, I love this world that the members of Tekkadan made for us. I love this world, this beautiful world that you left for us.”

The Toonami Trending Rundown for April 28-29, 2018. The Tekkadan have one last bow as this installment of the Gundam franchise in Iron Blooded Orphans comes to a close. Meanwhile, among other great moments, Goku, Vegeta, and Trunks have another round against Zamazu and Black in their so called “Divine Justice” crusade, while Gon goes dating with Palm, and Asta and co. meets the Wizard King as well as Noelle’s abusive family.

In terms of trending, the droughts would continue through this week, as #Toonami would be the only thing that trended on both Twitter in the US and Tumblr.

This week, Toonami showcased the trailer for the long awaited television debut of My Hero Academia, which premieres this Saturday at 11:30pm Eastern, which you can see below. It has also been confirmed that FLCL will be staying at midnight through the world premiere of season 2 as Toonami has opted to have MHA follow DBZ in back to back timeslots perhaps to give better ratings synergy as both are the two hottest Shonen Jump franchises right now. Similarly, as Black Clover gels well with Naruto so to speak, it will switch places with Hunter x Hunter, as the former will move to 1:30, while HxH moves up to 1am.

Toonami also showcased a behind the scenes interview with several of the FLCL creators. An extended version of the interview that was shown on tv was released on their Facebook page, which you can see below.

In Attack on Titan news, Pony Canyon and WIT studios have released a new trailer for the upcoming third season, with the announcement that the new season will premiere in Japan on July 22. FUNimation has announced that they do plan on simulcasting the new season. No word yet on they plan on creating a simuldub and airing the new season on Toonami as of now.

And to commemorate Cowboy Bebop’s 20th anniversary, FUNimation has decided to create not 1, not 2, but 3 different 20th Anniversary Collector’s Editions for fans to pre-order within the next month. There is a catch, as a specific collector’s edition must have at least 1,000 pre-orders in order for it to be manufactured, and if it doesn’t, you get refunded. To see the options and make a preorder if you’re interested, check out funi.to/bebop20 for more information.

Sit back and let Jet tell you how it works, space cowboy… pic.twitter.com/FAhIgroKTh The Gundam franchise has been a staple for the better cartoon show throughout its history, with entries achieving varying degrees of success back during the previous Golden Age for Toonami in the early 2000’s. Despite heavy requests to see Gundam’s return, fans would have to wait awhile for Gundam’s return, due to the closure of Bandai Entertainment and Sunrise’s realignment of strategy for the North American market, following Toonami’s revival. Gundam’s return did eventually came, as Sunrise would send Toonami their then most recent TV hit in Iron Blooded Orphans.

While IBO’s reception wasn’t as big as say Wing, the show still had some good reception from Toonami fans, and would lead to the airing of Gundam Unicorn during IBO’s offseason in early 2017, and during Anime Expo 2017, Toonami and Sunrise announced that Iron Blooded Orphans would indeed continue, later announcing the premiere of season 2 on October 7.

25 additional weeks of the Tekkadan’s quest on Gjallarhorn and Martian reform, and now we can say that the “Post Disaster” era is in the books. During season 2’s run, #GundamIBO successfully trended in some capacity with the exception of week 23, including in the US for the first 21 weeks. On the other hand, Gundam was not able to produce a character or in-show content trend. Sunrise has been hard at work releasing Blu-ray and DVD re-releases of Gundam classics including G Gundam and Gundam Wing, as well as doing a remaster and redub of the Gundam Seed series, as well as releasing other modern installments including Thunderbolt and Build Fighters, so for those craving more Gundam, feel free to check those out. Whether Toonami will bring in one of these classics or an upcoming installment down the line, we will see, but given Toonami’s history with this franchise, I’m pretty confident we’ll see the next installment sooner or later.

Tune in Saturday as My Hero Academia makes its long awaited debut on the better cartoon show, among other great moments. Until next week, thanks for the memories, Tekkadan, and stay gold.