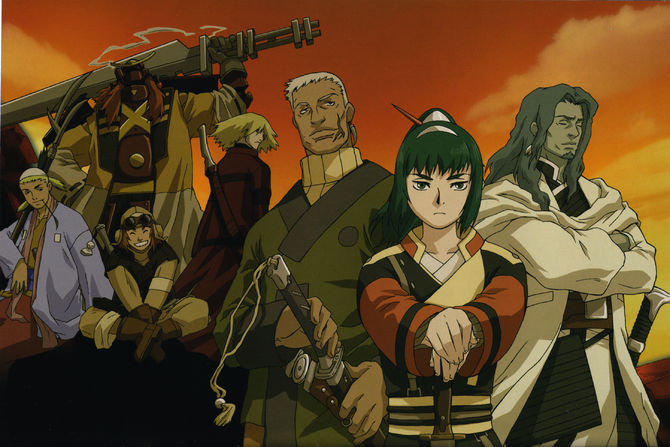 I’ll never forget the first scene I watched from Samurai 7– a girl drops off a high ledge in an effort to escape her pursuers when a robed swordsman immediately plunges down the depths after her. After some quick thinking involving his katana and an elevator cable, he rescues the falling girl.

I was instantly mesmerized.

The samurai-style attire coupled with an industrial city-scape attracted my attention. The juxtaposition of the Sengoku-period cultural elements alongside a modern-esque urban setting was so striking, of course I wanted to see more. As I continued to watch the series on Toonami (and Funimation), I realized that the names and the story felt familiar and recognized the director’s name in the title, Akira Kurosawa’s Samurai 7. I had seen the original black-and-white film of the Seven Samurai years before, starring the bold and imposing figure of classic Japanese actor Toshiro Mifune. Initially, the story involved six samurai; however, I learned when I first saw the film that the role played by Mifune, Kikuchiyo, was created just for him to incorporate a more rambunctious figure into a group of otherwise solemn samurai. When I realized what was playing on Toonami was this same story, it evoked all the excitement and fascination I felt when I watched The Seven Samurai.

This now-classic tale, a creation of Kurosawa’s, tells the story of a group of farmers being regularly raided by bandits. Tired of the harassment and theft of their crop, they decide to hire samurai to drive off the villains. Though they have no riches to pay with except rice from the fields, they head to the city with one goal in mind, “Find hungry Samurai.” After initial fruitless pursuits, they encounter a skilled swordsman rescuing a child from a dangerous encounter. This noble-hearted samurai at first declines their request, but later decides to help the farmers. Here the audience is introduced to the stoic Kambei, an experienced warrior, and the leader of what is soon-to-be seven. His adept handling of the rescue quickly draws the attention of the young Katsushiro, who begs Kambei to be his teacher, as well as the strange and comical figure Kikuchiyo, who reluctantly expresses admiration for the aging samurai. As the story continues, the remaining four join to form the eponymous group of samurai; there is the clever Gorobei, good-willed Heihachi, Kambei’s old comrade Shichiroji, and the remarkable Kyuzo.

The anime unfolds with all these familiar characters from the film, but I noticed an added intensity to their portrayals. There was depth to them beyond old-warriors-seeking-work. Scarred, both mentally and physically, they carry with them the vestiges from the previous war which also mark the surrounding landscape. In addition to the hint of their backstories, there are some notable and creative additions to the already compelling tale. The bandits are former samurai who converted their bodies to machine form, known as Nobuseri. The insertion of so much machinery in the series gives the unmistakable feeling of “technology vs humanity,” which I found engaging on a new level.

Several new characters were also introduced in the series. One example is the Water Maiden Kirara, one of the main characters. It was good to see a supporting female role in a story with all-male protagonists. In the original film, the only female character with any significant role was Shino, Manzo’s daughter, whom I found rather irritating as she spends the majority of the film weeping and cowering. Kirara, on the other hand, was curious about the world outside her village, strong-willed, yet aware of her own helplessness in the world around her. Though I was not always sure how I felt about her, it made her an interesting character to follow.

One might wonder why this story holds such significance for me. It may sound somewhat bizarre to many veterans of the genre. I had always been somewhat intimidated by the world of anime, despite my curiosity, and previous forays into the genre had only been with well-known series (like Sailor Moon or Naruto). Samurai 7 essentially became my gateway (and what an incredible journey it was). Not only was this a story I recognized, but it incorporated elements that I already was a fan of: old movies/classic film and fighting samurai. The new and exciting features added to the series left me wondering what was going to happen at the end of each episode. It also left me wondering if other unknown series broadcasted on Toonami, which I had previously avoided, might have more to offer.

The action animation was what I enjoyed the most. This was not the repetitive punching/kicking I had seen from DBZ’s Goku as he hovers in the air; each fight sequence and each demonstration of sword-craft was choreographed and detailed: from Kambei and Kyuzo’s swift encounter leading to their swords at each other’s throats, or the precision in which Gorobei catches the shots (between his fingers, no less!) of the Nobuseri, to the incredible speed and grace of Kyuzo’s fighting style as he cuts down any obstacle, be it machine or samurai. Each action scene captivated my attention. I will never tire of my fascination with Samurai, perhaps because of the sleek and light nature of their katana(s), which give them versatility in combat and quicker movements.

But it wasn’t only the animation of the action that had me interested; the character design was just as engaging. I loved the way each samurai’s personality was incorporated and interpreted in how he was drawn and animated. Kambei looks every inch the experienced and capable warrior, yet his flowing robes, loose locks of hair, dark skin, and even the feathered earrings give the distinct impression of the wandering ronin. I also fell a little in love with the character of Kyuzo. He lacks the aged look or scarring of the other older samurai, but something about him radiates that he is an experienced warrior. He is the only one to wield dual swords and his skill with them is exceptional, so much so that Kambei doubts he could win in a fight against Kyuzo. He definitely falls into the category of “strong, silent type,” always cool and competent, he executes each action with precision, speed, and a dispassionate look in his eye. It’s hard not to be drawn to the character. Even the other samurai show great respect for the warrior.

But even without these elements and changes, The Seven Samurai/ Samurai 7 stands strongly on its own because it’s not merely the narrative of a heroic rescue. It is also a character-driven drama, with all the complexities and depth that has to offer. In both tellings, seven Ronin come forward to battle, with no promise of victory, and for a cause that is not their own. I can’t help but wonder what it is which drives them to fight, with only rice as their reward. There is a stark tone change from the exciting first half of the story as the heroes gather together, to the dark reality of actual combat. Added to this is young Katsu, struggling to learn what it means to be a true samurai while confronted by his desire for a certain young woman. Of course, we cannot forget the feisty Kiku, who stands out so much from the other samurai with his quirky appearance and raucous personality, but carries his own secrets.

The story also does not neglect to explore how the predicament of the farmers affects their actions. Though the heroes and the villains are clearly identified as good and evil, it’s those who were in need of rescuing that demonstrate the most moral ambiguity: They hide evidence of the murder of past samurai, lock away their daughters and wives out of mistrust of the honor of the samurai, and when the latter arrive in the village, they cower and hide from the very men who were hired to save them. Yet by the end of the story, they are enthusiastic participants in the fight to defend their home. It makes one wonder if the story is actually about them all along, despite the title, an idea which Kambei contemplates as well. “We have lost another battle. It is the farmers who have won this victory.”  – (Kambei to Shichiroji)

I will never forget Kurosawa’s film. Kambei drawing Gorobei’s bow, Kyuzo charging forth on his own against a score of bandits, and the image of the graves of fallen comrades on a hill at the end of the film are indelibly etched in my mind. Throughout the film I had experienced a whirlwind of emotions and grown to care for each of these characters. But watching the anime felt more personal; these Samurai became a part of me. Every step of the journey, they took me along. My heart was racing with every battle scene, and it ached with each loss. The world in Samurai 7 forever sucked me into anime and all the possibilities it offered.