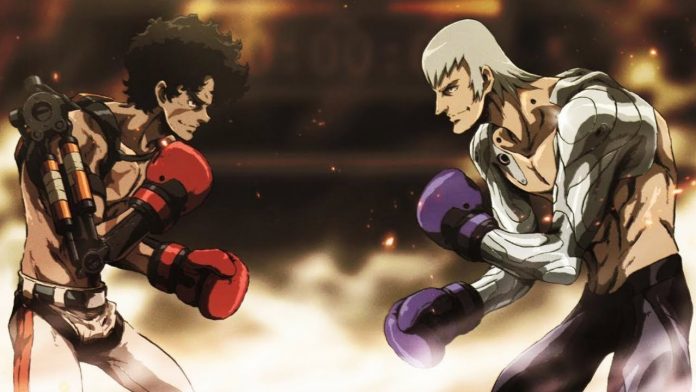 Rivalries can bring out the best in people, and can sometimes be more exhilarating than any battle. In anime, we see how rivalries motivate characters to be at their best to be at the top. Goku’s constant transformations inspire Vegeta to give his all in training in the hope of surpassing him. In Black Clover, Asta and Yuno continue to outshine one another to become the next Wizard King. “Gearless” Joe (also known as JNK.DOG, pronounced as Junk Dog) and Yuri of Megalo Box is an underrated rivalry worth mentioning. Yuri gave Joe a challenge that he couldn’t refuse: to fight him in his ring at Megalonia. Both saw this mutual hunger to fight someone who was a reflection of their same passion. With Joe coming from the underground and Yuri currently the champion of Megalo Boxing, each went through obstacles to meet in the ring. Simultaneously,  only 13 episodes might seem short for Toonami fans, this rivalry impacted on the people in Joe and Yuri’s life, making for a riveting story for viewers to see.

Not much is known about JNK.DOG’s life before ending up in the underground boxing ring. We do know that JNK.DOG realizes his boxing skills were being wasted on throwing fights to pay off his manager Nanbu’s gambling debts. JNK.DOG rides his motorcycle to blow off some steam because of his current situation. While riding to the city, he almost hits a woman (who happens to be Yukiko Shirato, the president of the Shirato Group), a significant sponsor for Megalonia. He meets Yuri, who is ready to fight JNK.DOG for being disrespectful to Yukiko. Yuri’s fighting stance took JNK.DOG by surprise, and at that moment, he knew Yuri was a worthy opponent. JNK.DOG got the chance to see Yuri again, but this time in an underground fight. JNK.DOG wasn’t satisfied after being thoroughly defeated by Yuri because of the excitement he felt fighting someone like him. Yuri told JNK.DOG that he’d fight him again but only in his ring at Megalonia, the tournament to determine the best Megalo Boxing fighter in the world. From here, Nanbu made a deal with mob boss Fugimaki to get a fake ID where JNK.DOG chooses the name “Joe” to enter Megalonia. Nanbu becomes Joe’s trainer in preparation to meet Yuri again in the ring.

Joe’s rise to Megalonia is an example of “started from the bottom now we’re here.” His motivation is to get back in the ring with Yuri no matter the cost, created just as much intrigue as Joe’s fights did. And yes, Joe technically was a part of Megalonia, but he had to overcome major hurdles to reach his rival’s peak. He was ranked dead last, and to gain some attention, Joe fought without gear and earned the nickname “Gearless Joe.” Much like in real boxing or MMA, Joe and Nanbu created a persona and gimmick that helped give them notoriety.

The interaction between Yuri and Joe has always been respectful since their match in the underground. Throughout the anime, they were able to communicate and share their motivations for boxing. Joe believes fighting Yuri will take him to heights that he’s never been before, and reach the potential he thinks he has for Megalo Boxing. The opposition Joe had to fight in the underground didn’t present the competition Joe deserved. Yet, he had to lose to these unworthy opponents to the benefit of Nanbu paying his gambling debts. His frustration was valid because he had to downplay his boxing talent and hold back fighting at his full potential. This feeling is equivalent to not having the opportunity at your job and watch an undeserving coworker reap the benefits of their mediocrity.

And thanks to his interactions with Joe, viewers learn more about Yuri and what makes him tick. Yuri is fighting for Yukikio’s vision of using gear outside of the ring, which is interesting considering Yuri is fighting for someone’s dream and not his own. And yet, on the other side, Joe is excited to rely on his fists to win and not the assistance of gear. At its core, this frustrated Yuri, considering that he saw so much of himself in Joe. Yuri confesses his jealousy of Joe because he believes Joe to have true skill. Joe went from being ranked at the bottom to fighting Yuri in the championship without using any gear. In contrast, Yuri’s gear is fused with his body, which assists in his spot as Megalo Boxing’s champion. From Yuri’s perspective, Joe didn’t have to answer to a corporate sponsor or have an image to maintain. So seeing how free Joe was to do whatever he wanted to create even more tension for the boxing prodigy. Joe being gearless and his words of desiring a real match inspired Yuri to make a decision that has an impact on his future because he also wanted a rematch.

Due to the rivalry, Yuri has his gear removed so he could have a fair fight with Joe (which Yukiko was against). This decision cost Team Shirato everything, including the potential deals in the making after Megalonia finished. The surgery to have his gear removed would be putting his life in danger, but Yuri was willing to go through the agonizing pain, all for a simple boxing fight. He felt this was no different than Joe risking his life, fighting against those with gear while he was “unarmed.” It appears that this is the one time Yuri thought of himself, not Yukiko’s dream because up to this point, he was doing whatever Yukiko asked of him. It was good to see how Yuri’s respect for Joe made him put his passion first for a change. Finally, we get to see the rematch of “Gearless” Joe and Yuri. They were having the time of their lives because both Yuri and Joe worked so hard to get to this very moment. At one point, Nanbu had his hand on the ring describing the fighters dancing. We’ve been waiting for this rematch since episode two because Joe’s excitement of fighting Yuri was contagious. If you’re a boxing fan and watch anime, you were treated to Joe going the distance with Yuri in 13 rounds. With Yuri being such a dominant champion, Joe was the only opponent who could give him and fans the memorable match for the first Megalo Boxing tournament.

Aside from Joe and Yuri’s rivalry, Megalo Box has other rivalries that were connected to Joe and Yuri. During Joe’s rise to fame, he came across Aragaki (who was highly ranked at the time), who was Nanbu’s former student. Aragaki requested to fight Joe so he could demolish the fighter Nanbu invested time to train. And it brought forth a new rival for Joe to face. Despite the history between Aragaki and Nanbu, Joe saw Aragaki as someone to defeat on the road to Megalonia, and a considerable chance to rise closer to Yuri. Nanbu attempted to discourage Joe from fighting Aragaki, but he took the discouragement as not believing he could win. But thanks to this fight, Aragaki and Nanbu were able to settle all the bad blood and feelings that tormented each other. Aragaki was Joe before he and Nanbu met. And the two were like family, always wanting the best for each other. However, in Aragaki’s eyes, Nanbu abandoned him after he supposedly died, which created resentment in Aragaki. And thankfully, Joe’s drive to reach the top and fight Yuri helped mend a relationship that deteriorated into nothing.

And rivalries also spilled outside of the ring. Mikio Shirato challenges Joe to a match, which turns out to be a blackmail attempt to keep Joe from entering Megalonia, as well as a plan to take the Shirato Company away from his sister. Mikio was envious of Yukiko running the family company and wanted to prove that his gear (powered by artificial intelligence) was superior to Yuri’s. Mikio’s desire to usurp Yukiko created the familial rivalry that many can relate to living. Siblings can push each other both positively and negatively, and sadly, we saw the negative effects of that here. Mikio was OBSESSED with taking his sister down and would use any means to get his way, which happened to put a massive wrench in Joe’s plan. It shows how rivalries were plenty in Megalo Box and how Joe was a catalyst for setting people on the right path.

And the fruits of Joe’s labor help create more wonderful bonds. Aragaki and Mikio losing to Joe brought a level of respect where both of these fighters aided Joe and Yuri for the championship match. Aragaki became Joe’s sparring partner to prepare for the fight, and Mikio performed the surgery to remove Yuri’s gear. Even though these rivalries’ intended to take Joe and Yuri down, things shifted to meeting the fighters’ needs to make this championship match unforgettable.

Megalo Box is an anime worth checking out since it sends the message of, “working hard will get you to where you want to go.” Despite the obstacles Joe had to face, he never gave up and ended up winning Megalonia. The confidence Joe had in himself was remarkable and fought against doubts and discouragement that came his way. Joe’s freedom to be himself inspired Yuri to come out of his shell and put what he desired most over his company’s obligations. Confidence and inspiration work together for anyone to reach a goal that is now within reach, and sky’s the limit to what you can do.

Megalo Box allowed me to see that a sports anime can be just as entertaining as any other shōnen anime. Joe’s determination to climb to the top and fight Yuri again, no matter the odds, kept me watching because I love cheering for the underdog. Yuri’s growing respect for Joe and making sure he remained at his best was admirable. Their intertwining story and rivalry made a remarkable story of someone being your motivation to give it everything. Another season was announced last year at Anime NYC, meaning that this rivalry might not be done yet as it will take place seven years after the first season’s events. So we’ll see what Joe and Team Nowhere are up to during this time.