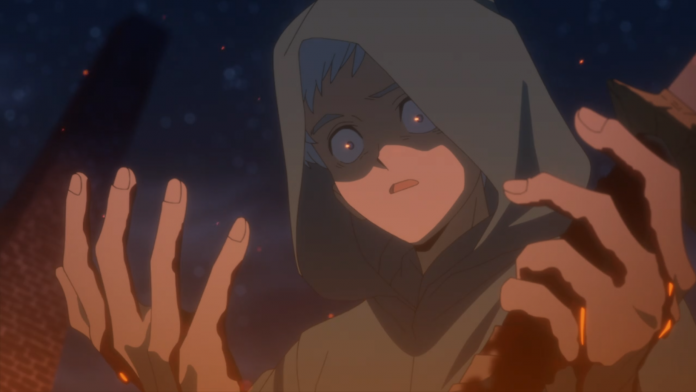 The criticisms in this editorial refer to The Promised Neverland’s narrative and Japanese production issues, and do not reflect the quality of the English localization.

I have a long history with The Promised Neverland since it became a staple in the anime/manga world. I was an active reader of the manga during its serialization in Weekly Shonen Jump. And my first editorial for Toonami Faithful was about the anime premiering on Toonami. Still, my enthusiasm for the series has its limits, which made watching The Promised Neverland’s second season a painful experience. It’s been a while since I’ve been this disappointed by a Shonen Jump adaptation, which may be one of the worst in recent memory.

While The Promised Neverland’s second season has received attention for its adaptation choices, the first season also took its fair share of liberties.  Many scenes were re-framed to convey a more suspenseful tone to emphasize the series’ horror aspects. This reframing also led to many of the story’s internal monologues being removed from the anime and characters such as Sister Krone being given entirely different personalities. These choices didn’t alter the core plot of the series, but they distanced the anime from the more strategic and subdued tone of the manga. It’s unreasonable to expect an anime to be a 1:1 adaptation of its source material. Still, as a fan of The Promised Neverland’s manga, it felt like the anime had lost a part of the overall appeal in its attempt to differentiate itself.

In an interview shortly after the conclusion of The Promised Neverland’s first season, producer Kenta Suzuki mentioned how their team would likely have more flexibility with the second season’s story. At the time, it was hard to tell what this meant, but as the Japanese premiere date for the second season approached, the situation was starting to become apparent. The manga’s writer Kaiu Shirai was announced to be supervising an “original scenario” for the anime, and the coming season would have a shorter length of only 11 episodes. Everything was pointing towards some significant narrative changes. And while normally, anime fans will groan in despair, I was more interested in what changes were going to happen.

Looking objectively, anime diverging from its source material is not always a cause for concern. In the past, series such as Fullmetal Alchemist and Trigun have proven that an anime-original story can still be compelling and memorable. Recently on the Toonami Faithful Podcast, I joined a discussion talking about the subject of filler or anime original stories, and what they need to do to be successful. And during that episode many examples were given, meaning that there was a lot of “promise” for what fans could get from this anime original scenario in The Promised Neverland. Sadly, this wasn’t the case for The Promised Neverland, and instead had its second season deliver a rushed mess with its changes only further damaging its story.

It quickly becomes apparent that The Promised Neverland’s second season is trying to cover too much ground. The first two episodes adapt a combined 12 chapters from the manga, removing many character moments and world-building to progress the plot. Given that the anime intended to diverge from the manga, this choice wasn’t surprising, but it was a foreboding sign of what was to come. The third episode had the anime’s biggest shake-up, skipping the entirety of the manga’s Goldy Pond arc and omitting all the new characters that followed. There was no way that the Goldy Pond arc was going to get a proper adaptation in this season, but removing every aspect of it from the anime felt like a huge misstep. In the manga, the Goldy Pond arc was vital to the narrative, as it explored the history of the human and demon worlds and introduced heavier action elements into the series. The story arc also included fan-favorite characters such as Leuvis and Yugo, and their absence in the anime gravely disappointed manga readers. By skipping some of the manga’s best material, I quickly lost interest in the anime, but I hoped that the second season could still tell a satisfying story. I was very wrong.

The remaining eight episodes of The Promised Neverland’s second season is an anime original scenario that left a lot to be desired. It was depressing that the anime had skipped over a massive portion of the manga, but this was finally the anime’s chance to differentiate itself and create its own identity meaningfully . Unfortunately, the second season’s original scenario is still heavily influenced by the final nine volumes of the manga, reusing entire plotlines and character motivations that for anime only watchers, might not make as much sense or seem obvious. Norman’s demon genocide plan and the Ratri Clan were made the primary focus, but neither of these stories had the build-up to be naturally implemented into the anime. Norman’s motivations in the anime are nearly identical to those of the manga, causing his personality change to feel abrupt due to the omitted character moments. Meanwhile, the Ratri Clan feels like an afterthought, only becoming relevant in the last two episodes and lacking depth. This became a tough hill to climb, and leads to the anime’s later episodes feeling less like a new story and more of a poorly executed rehash of existing ideas.

What’s worse, the anime’s original scenario downplays the demon race’s significance and history. Outside of the evil-blooded demons Mujika and Sonju, most of the notable demon characters are removed entirely from the story. This includes the demon royal family and nobility, who served as one of the major antagonists of the manga. Even the mysterious “The One,” granter of the series’ titular “promise” between the human and demon worlds, is given no screen time despite being foreshadowed by Sister Krone in the first season. These absences devolve the anime into a purely human conflict, abandoning the fantasy elements that made the manga compelling. And it’s depressing since I’d argue that these moments are what made The Promised Neverland an enjoyable experience.

These issues culminate in the final episode of the anime, which ends with a series of still frames that depict Emma and her group liberating the demon world and abolishing the human farms. Out of all the questionable choices that the anime made, this was the most absurd. Fans are forced to imagine Emma’s efforts instead of seeing them with their own eyes, robbing any satisfaction from the anime’s ending. Despite all the sacrifices, the anime couldn’t tell a complete story.

Beyond its narrative issues, I was also disappointed with the second season’s animation and visuals. Given that this season was produced amid the COVID-19 pandemic, I sympathize with CloverWorks and their team’s production issues. That said, I can’t deny that the resulting product was below my expectations. Even at its worst moments, The Promised Neverland was a beautiful manga, and the world that manga artist Posuka Demizu drew was heavily detailed and varied. None of those qualities are present in the anime. The colors look dull, the environments are empty, and the animation feels far too limited. The unnamed demon designs are also far more uniform than in the manga, making them feel less memorable. The Promised Neverland’s world no longer feels alive, and it makes me sad that one of the series’ best qualities has been lost.

I’ve watched my fair share of disappointing adaptations, but few have drained me as much as The Promised Neverland. With other popular manga like Demon Slayer and My Hero Academia receiving stellar anime adaptations, it’s a shame to see this series not get similar treatment. I won’t be re-visiting this show anytime soon, and I hope we don’t see another adaptation of this quality on Toonami ever again.